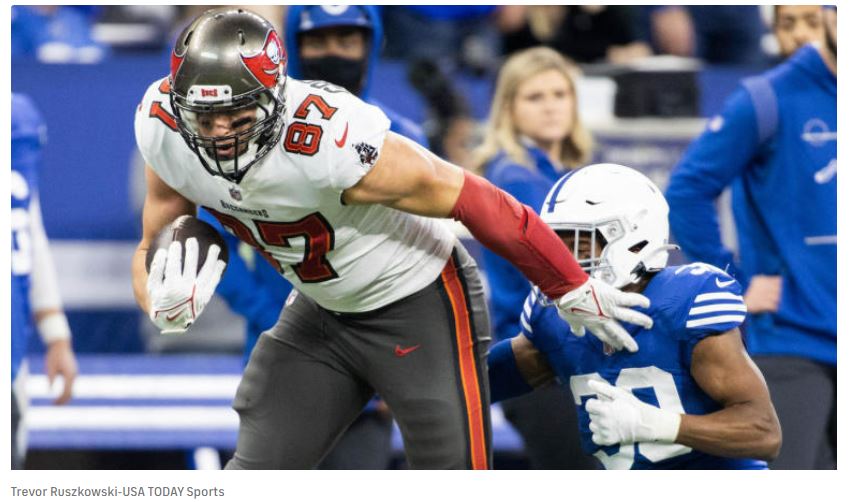 While Tom Brady pulled a "Brett Favre," retiring and un-retiring in the same offseason, his favorite target, tight end Rob Gronkowski, could be following a different path this year, one that was laid out last year by another all-time great, wide receiver Larry Fitzgerald.

The NFL's No. 2 player on the all-time receptions and receiving yards lists saw his contract with the Arizona Cardinals expire at the start of free agency in 2021, and he didn't do anything. No filing of retirement, coming back to the Cardinals, or joining another team.

On his SirusXM show with Jim Gray, "Let's Go," Fitzgerald said he didn't "have the urge to play" in August of 2021 and that he would think about it as the fall progressed. Those feelings never changed, and the 17-year NFL veteran didn't speak about his career plans again until this past February when he simply said, "I had a great run. It was fun. I wouldn't change anything."

This offseason, Gronkowski's Buccaneers contract expired, and he remains a free agent. It makes sense that someone like Gronk would take his time before deciding whether or not to play a 12th NFL season. During a CBS News interview in 2019 when he retired for a year, the 6-foot-6, 265-pound tight end said he has had about "nine surgeries, probably had 20 concussions playing football."

Last weekend, Gronkowski said he will return to Brady and the Buccaneers if retired wide receiver and former Patriots teammate Julian Edelman also joins the team. Edelman retired prior to the 2021 season after a 12-year career with the Patriots, where he won three Super Bowls and a Super Bowl MVP award after New England's 13-3 victory over the Rams in Super Bowl LIII.

"Oh yeah, if Julian signs with the Bucs right now, I'm coming back for a whole 'nother year," Gronkowski told Sports Illustrated. "Hands down. I was just with him last night. He needs to sign with the Bucs."

The problem is Edelman seems happily retired as an analyst on "Inside The NFL," and he's more likely to be seen hanging out with Gronkowski in a hot tub, as he was April 27, instead of on the football field.

"I always said, I'm gonna go until the wheels come off," Edelman said when he retired. "They finally have fallen off."

As for Gronk, could this really be the end of his football journey? If so, here's where the future Hall of Famer ranks among the best pass-catchers in NFL history.

No one has caught more touchdowns from the NFL's most decorated quarterback than Gronkowski. His 105 receiving touchdowns from Brady are 64 more than the 41 both Edelman and Randy Moss totaled during their runs with the quarterback.

Most receiving touchdowns from Tom Brady (including postseason)

"We've played together -- I know basically every situation that's come up," Brady said last December about his 11 seasons with Gronkowski, half of Brady's 22-season career. "I know how [Gronkowski] would deal with it. So much about football is anticipating what the problems will be as opposed to trying to figure out how to solve the problem after the play. I think a lot of it is solving the problem before things happen. 'Gronk,' he knows what I'm thinking, I know what he's thinking. We've just done it so long together. It's really nice. It's a great luxury for two position players like that that have played together for as long as we have."

The best tight end ever?

Gronkowski ranks in the top 10 or top five in all three major receiving categories and trails only Antonio Gates (116) and Tony Gonzalez (111) in receiving touchdowns. Gronkowski has played in 143 games, 93 fewer than Gates and 127 fewer than Gonzalez.

Gronkowski's mind-meld with Brady has made him the second-most dangerous playoff weapon in NFL history with 15 playoff receiving touchdowns, second only to Jerry Rice's 22 playoff touchdowns. In their fourth Super Bowl win together, he caught the game's first two touchdowns from Brady en route to a 31-9 Super Bowl LV blowout of Patrick Mahomes and the then-defending champion Kansas City Chiefs.

In just his second NFL season in 2011, he led the league in receiving touchdowns with 17, one more than Hall of Famer Calvin Johnson's 16 that year. Even though a lot of records have fallen as the NFL becomes more pass-happy, those 17 receiving touchdowns remain the most by a tight end in a single season in NFL history. His 1,327 receiving yards that season were also the most ever by a tight end at the time, but that total now ranks as the fifth-most a tight end has ever had in a season.

In case Gronkowski decides to spend more time in the hot tub than on the football field in 2022, the Buccaneers picked two tight ends during the NFL Draft. However, like the Cardinals did a year ago when they "left the ball" in Larry Fitzgerald's proverbial court, the Buccaneers are still leaving room for Gronkowski just in case he has the desire to re-join Brady on the football field.

"I'm still giving him that time," Buccaneers general manager Jason Licht said during the 2022 NFL Draft, per the Tampa Bay Times. "We still talk. I think it didn't matter if we drafted two tight ends. It wouldn't matter. I think Rob welcomes that; the more the merrier for him. So that doesn't show our hand on or foretell what's going to happen in the future." Read More