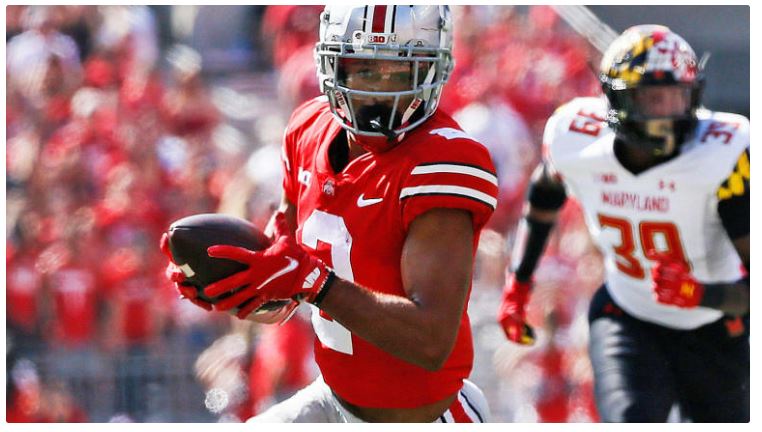 The Packers will likely do something in the 2022 NFL Draft that they haven't done since 2002, when Tobey Maguire's "Spider-Man" (first one) was the world's top grossing movie: draft an offensive skill position player (RB, WR, TE) in the first round. Green Bay's last such first-round pick was Florida State's Javon Walker, who went 20th overall in that draft. If two-time reigning NFL MVP Aaron Rodgers gets his wish, Walker will hold that distinction for only a few more days, as the NFL Draft kicks off on April 28 in Las Vegas.

One of Rodgers' primary complaints about the Packers prior to the 2021 season, and before signing a three-year, $150 million contract extension, was that he wasn't "involved in conversations directly affecting his job." With back-to-back All-Pro wide receiver Davante Adams, who was responsible for 30.6% of the Packers receptions (second-most in NFL) and 34.3% of the Packers' receiving yards (third-most in NFL) last season, now a Las Vegas Raider, Rodgers will certainly be involved in conversations with general manager Brian Gutekunst about getting some more offensive firepower with their two first-round picks (No. 22 and No. 28) to cushion the blow of losing Adams.

No player in the NFL has been a more productive receiver than Adams since 2018.

"Sometimes you got to make some tough decisions," Packers head coach Matt LaFleur said to NFL Media's Tom Pelissero at the NFL Annual Meeting in March. "Certainly appreciate everything Davante brought to our team. I mean, he is the best receiver in the National Football League, so that was a tough one for me personally and for our organization."

Replacing that production with one player is impossible, as the Packers indicated by signing receiver Sammy Watkins this month, in addition to what comes next in the draft. Who could the additional pass-catching support be? Rodgers' most successful connections throughout his career have been with a few different styles of receivers with route-running technicians (Adams and Jordy Nelson), speed in the slot (Randall Cobb) and jump-ball, contested-catch specialists (James Jones). None of them were first-round selections with Adams, Nelson, and Cobb all coming off the board in the second round while Jones was a third-round pick.

Tight end Marcedes Lewis, the 28th overall pick by the Jaguars in 2006 out of UCLA, is the only first-round pick Rodgers has connected with for touchdowns (4). It's astounding how Rodgers has the fifth-most passing scores (449) in NFL history, but none that have gone to a Packers first-round pick. As for whom the first player to earn that distinction could be, CBS Sports mock drafts have pinpointed four wide receiver prospects who could be selected by the Green and Gold next week: Ohio State's Chris Olave, Arkansas' Treylon Burks, USC's Drake London, and Penn State's Jahan Dotson.

Here's how they compare physically and stylistically to Rodgers' best Packers pass-catchers.

Like Adams (68 receiving touchdowns, most from Rodgers), Olave is leaving his old home with a polished route tree and as his team's best at finding the end zone (35 career receiving touchdowns, most in Ohio State history). Olave doesn't have this draft's best physical tools, but he is a graceful athlete who knows how to deliberately create separation. At the bottom of the screen, Olave hits his defender with hesitation and a stutter-step before powering into his move down the sideline.

That move is reminiscent of a play down the sideline by Adams in Week 17 against the Vikings.

Olave's understanding of how to operate in space when the play breaks down is also one of his best traits. That skill is crucial when playing with Rodgers, who utilizes his movement in and outside of the pocket to create throwing lanes many quarterbacks simply wouldn't attempt.

Here's Olave readjusting his route as his quarterback, Justin Fields, scrambles in order to burn the Wisconsin Badgers defense in the 2019 Big Ten Championship Game. Making plays when everything breaks down is one of both his and Adams' signature traits.

On fourth down, Adams relocated and took off for a touchdown in Week 7 against Washington.

One of the biggest reasons Olave finished his Buckeyes career with the most receiving touchdowns in school history is his ability to extend for over-the-shoulder passes and throws that were essentially targeted to a spot instead of his body.

Adams fundamentally iced a Divisional Round playoff game against the Seahawks in 2019 with this type of concentration on a late third-and-8 play. 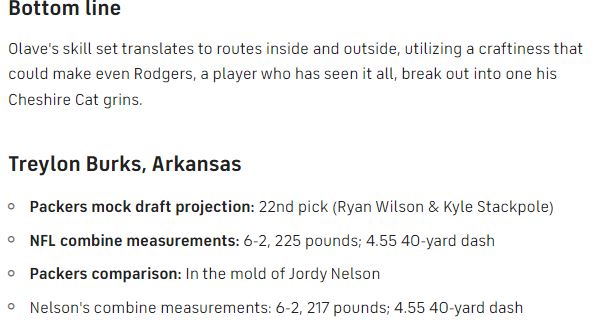 Burks can be utilized all over the field and has the size with enough speed to be a multi-faceted weapon. His routes aren't the most technical, but he can outmuscle defenders downfield for big plays as well as creating space after the catch similar to Nelson.

Whether it's tight catches downfield

Burks and Nelson posted identical 40-yard dash times (4.55), and despite both weighing over 215 pounds (Nelson was 217 at the combine), both exhibited the ability to turn on the afterburners to escape the best defenders when corralling the ball in space. Burks had one of the best games of his Razorback career against a number of Alabama's future professionals, totaling eight receptions, 179 receiving yards and two receiving touchdowns. Below is his 66-yard score from that game.

Here's Nelson blowing past future Hall of Fame cornerback Darrelle Revis on a similar play for a 45-yard touchdown in 2014.

Dotson is a do-it-all wideout, who like Cobb, has a game that is larger than his frame. No one in this year's draft has hands like his, and Dotson makes the most of those mitts with incredible concentration. Here he is with back-to-back, one-handed catches with the second one going for a touchdown against Ohio State in 2020:

Cobb demonstrates similar body control and coordination to secure a one-handed, over-the-shoulder touchdown against the Bears:

Dotson put everything scouts need to see on tape against Maryland in 2021, setting a Penn State single-game program record totaling 242 receiving yards on 11 receptions with three receiving touchdowns. He is able to overcome his lack of size against press coverage by winning with quickness and balance. Each touchdown in this game highlighted a different area of strength.

The first, a 38-yard score on a double-move, flashed Dotson's quickness and coordination on his cuts to get himself wide open.

Cobb, at the bottom of the screen, burned the Rams with a double-move

The second, a 21-yard touchdown, showcased his ability to fake defenders into going the wrong way as he sailed into the end zone.

Against the Panthers, Cobb lulled his defender into a false sense of security, turning back to Rodgers underneath before accelerating up the sideline for a touchdown off a wheel route.

The third, an 86-yard touchdown, flashed his 4.43 40-yard time as he simply sprinted through the middle of the defense and didn't stop.

Like Dotson, Cobb could not be stopped once into the open field against the Bears:

London is a giant of a wide receiver with a truly elite skill: winning 50-50 balls. London led college football with 19 contested catches this past season, per Pro Football Focus. His basketball experience is evident as he played for the Trojans on the gridiron and the hardwood his freshman year. While Jones' physical stature wasn't an exact match to London's, a significant portion of his touchdowns were the kind of jump balls that London specializes in.

Here's Jones winning at the highest point, outmuscling a Bears defensive back in the end zone:

Plus a game-winning catch around a Saints defender:

London runs like a boulder rolling downhill, gaining speed as he switches gears moving upfield. He doesn't have jaw-dropping, breakaway speed, but he's a better runner than given credit for.

London is a more fluid athlete who moves a lot tighter than one would imagine for a man standing at 6-foot-4, 219 pounds. He is also a gritty player with 36 forced missed tackles over the last two seasons, the most in college football according to PFF.

With Rodgers becoming the highest-paid player in NFL history ($50 million per year), the Packers front office getting him an offensive skill player in the first round would be a statement equally as important for Rodgers as all that cash. Read More