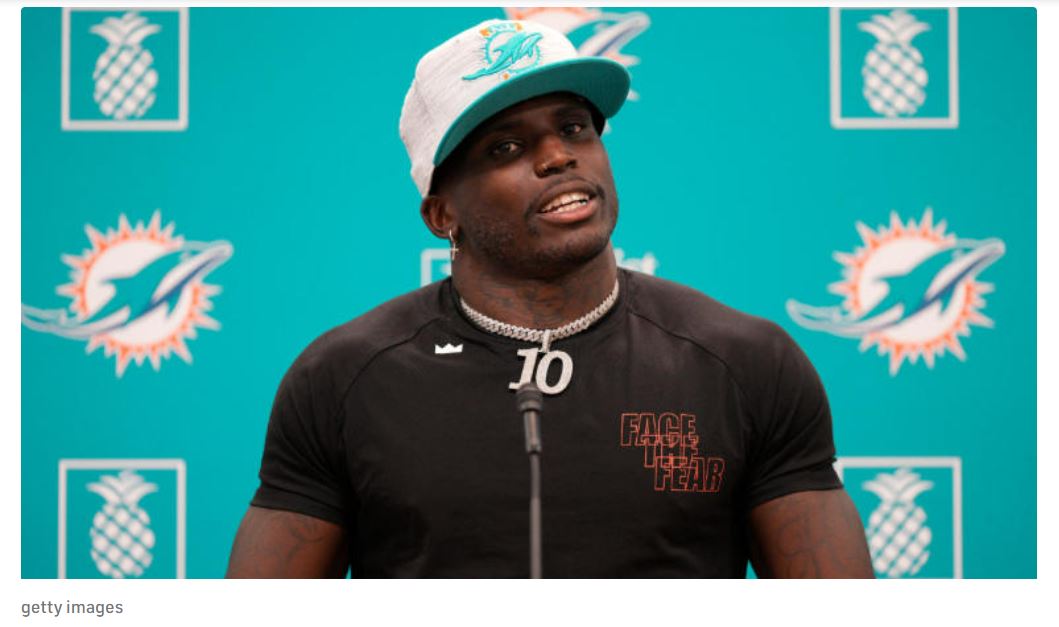 The Miami Dolphins offseason has been about one thing: putting quarterback Tua Tagovailoa in the best position to succeed. The Dolphins need to find out if the fifth overall pick in the 2020 draft is "The Guy" with two years and a fifth-year team option remaining on his rookie deal. The hiring of San Francisco 49ers offensive coordinator Mike McDaniel as the new Dolphins head coach is part of this quest.

"I'm really excited moving forward because the guy [Tua Tagovailoa] has some skills that I think are untapped," McDaniel said. "I think it's important that you empower the quarterback with the rest of the players around him and the scheme you bring forth. So, I think his best days are in front of him. And that's a really cool piece of the process to be part of as a coach."

Putting a Hall-of-Fame level talent like Hill next to wide receiver Jaylen Waddle, who broke the NFL rookie single-season record for catches in a season with 104, is a matchup nightmare for opposing defenses.

"It's like they said with the Rams: 'Eff them picks, man,' eff them picks at the end of the day," Dolphins wide receiver Tyreek Hill said of Miami trading away draft picks to bring him to South Florida. "Bringing (tackle) Terron (Armstead) in, they definitely want to put all the right pieces around the quarterback because the quarterback is the most important player on the field. Having myself, Terron and a few other pieces that were already here, like you definitely can tell that the owner wants to win, Coach McDaniel, [general manager] Chris Grier, all of those guys want to win. We're all looking forward to the challenge, to the journey and I can't wait to work."

Here's a look at layers with 450+ receptions, 6,500+ receiving yards and 55+ receiving TDs through their first six seasons in NFL history (Moss and Harrison are in the Pro Football Hall of Fame): 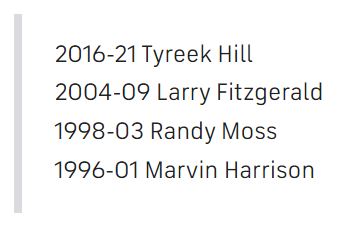 More success could be on the horizon for Hill in this Dolphins offense. When McDaniel was an offensive assistant with Washington, Robert Griffin III won 2012 Rookie of the Year en route to the team's first division title since 1999. Washington's rookie running back Alfred Morris ran for career-highs with 1,613 yards and 13 touchdowns that season. McDaniel was also an Atlanta Falcons offensive assistant during Matt Ryan's MVP season that ended with an overtime Super Bowl defeat in 2016. Falcons running back Devonta Freeman ran for his career-bests with 1,079 yards and 11 touchdowns that year. Even McDaniel's former players on teams that didn't win big, like former wide receiver Andrew Hawkins, sang his praises in the coaching carousel as early as 2019. That was despite the 2014 Browns going 7-9 with McDaniel as the wide receivers coach. Hawkins had career-highs in catches (63) and yards (824) with him in 2014.

With McDaniel being promoted to 49ers' offensive coordinator this past season, wide receiver Deebo Samuel became a First-Team All-Pro for the first time after rushing for 365 yards and eight touchdowns (most by a WR in a single season in NFL history) while also totaling 1,405 receiving yards and leading the NFL with an 18.2 yards-per-reception average. His 772 yards after the catch were the second-most in the NFL behind only NFL Offensive Player of the Year Cooper Kupp's 846. Samuel's 2021 output out-did his totals from his first two seasons (2019-20) combined as he became the first player in NFL history to have over 1,400 receiving yards and over 300 rushing yards in the same season. 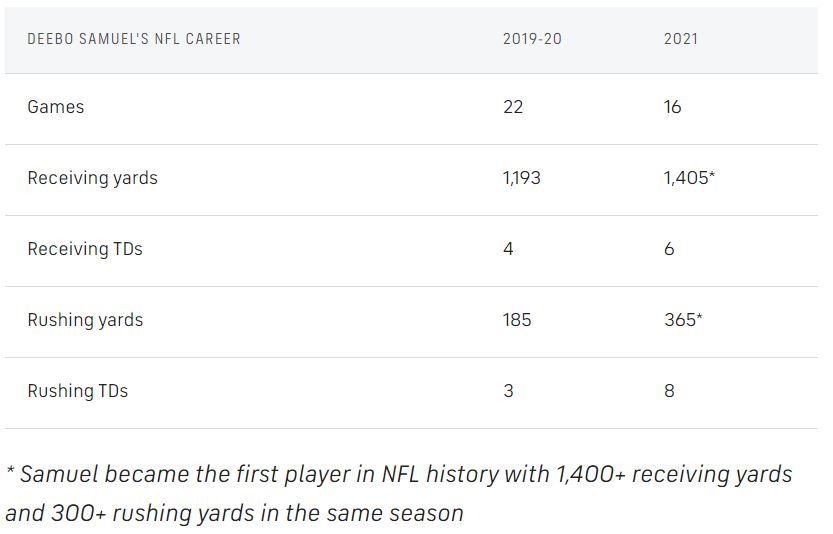 "Both players [Deebo Samuel and Tyreek Hill] are exceptional with the ball in their hands," McDaniel said. "Your starting point in terms of where you're trying to accentuate people's skillsets, that is a commonality. As far as exact ways that we will use Tyreek Hill relative to the way that Deebo Samuel was used in San Francisco, there's probably going to be some overlap to some degree. But those are things that Deebo Samuel evolved into that role because of both circumstance and skillset while in San Francisco. I expect no difference, really, with Tyreek, where we are going to start with the foundational elements of the receiver position. I promise you we're not going to limit -- or we're going to continue the process of developing him and the Miami Dolphins football team. For a lot of players, that will look different in Week 4 than on April 4th."

McDaniel sticking with "foundational elements" of the wide receiver position makes sense considering Samuel (6-foot, 215 pounds) is built quite differently than Hill (5-10, 185 pounds) and Waddle (5-10, 182 pounds). Samuel had 59 rush attempts in 2021 while Hill has never had more than 25 in a season. Waddle had two rushes for three yards and a touchdown as a rookie. However, from an alignment perspective, both Samuel and Hill lined up mostly out wide and in the slot with Waddle making his living almost overwhelmingly in the slot. 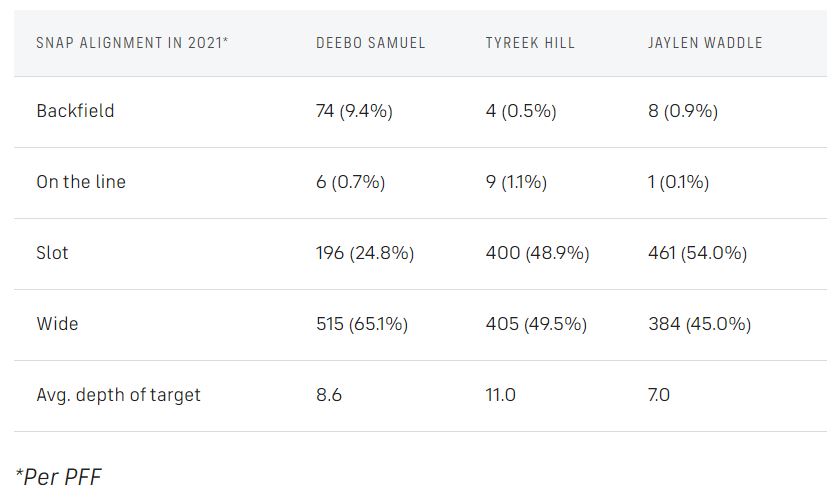 The route trees between the three also have a lot of crossover with each of their offenses last season designed to get these playmakers the ball on quick-developing routes. 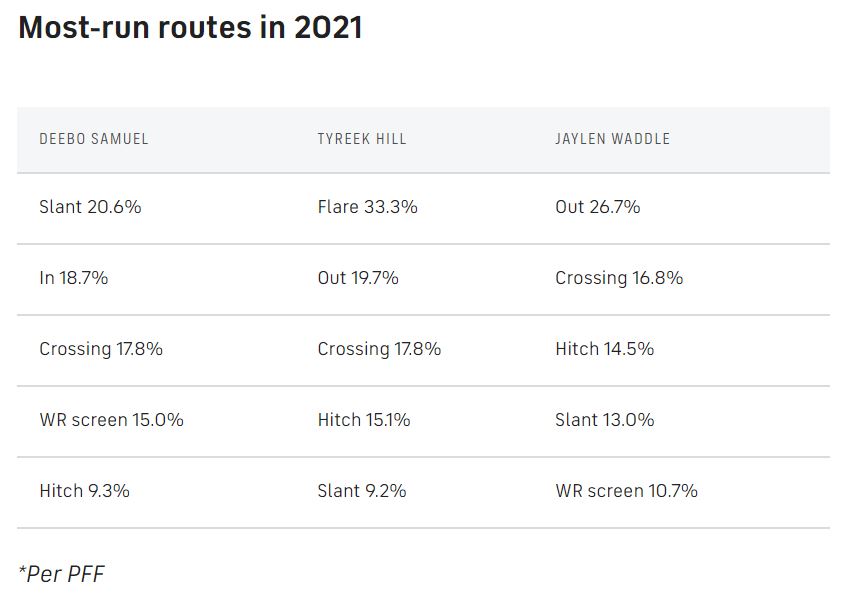 The 2021 Dolphins featured Waddle over a quarter of the time on quick passes to the outside to utilize his speed and ability to cut on a dime as much as possible. One of the reasons was because Tagovailoa was throwing behind the worst pass-blocking line in the NFL (51.8 Pro Football Focus pass-blocking grade, lowest in the NFL). Out of necessity, Tagovailoa completed 81.8 percent of his passes on out routes, the second-highest rate in the NFL behind only Kyler Murray's 82.6 completion percentage.

"Tua is one of the most accurate quarterbacks in the NFL," Hill said. "So just his ball placement, getting us the ball in space -- you know, perfect placement -- and us utilizing our speed. Utilizing our best asset, and that's just being dangerous."

Expect a more varied mix between those types of quick passes in 2022 with Hill in the fold, but with the same philosophy: get the ball out quickly to the speedsters in space.

"What I've seen [from Tua] is a skill set that I'm familiar with, that's very successful in this offense," McDaniel said. "You're seeing a very accurate passer that receivers love to catch footballs from -- tight spirals and accurate throws, which are huge for run after the catch and YAC [yards after catch] yardage. What that means for an offense is if you have people who can run after the catch, that's an outstanding skill set for him."

McDaniel will also need to explore Tagovailoa's ability to throw deep behind a reworked offensive line. Hill stands as the NFL's best deep threat since entering the NFL in 2016. Samuel and Waddle were more catch-and-run players last season (average depth of target was under nine yards for both), which is not necessarily a negative, but Patrick Mahomes threw to Hill 11 yards downfield on average, past the first down marker. 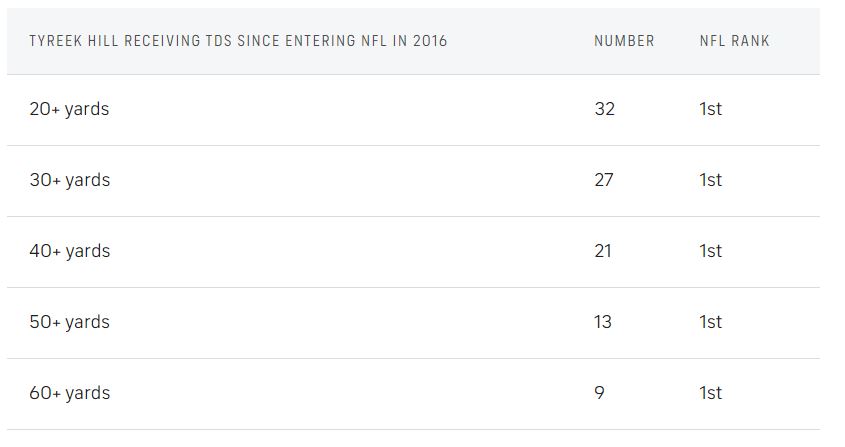 The Dolphins seldom used Waddle's speed deep in 2021, throwing to him 13 times on passes of 20-plus air yards, only completing four according to Next Gen Stats. Since drafting Tagovailoa, he has attempted 58 passes that traveled over 20 yards in the air, tied for the third-fewest since 2020 with Mac Jones (rookie in 2021) among quarterbacks with at least 50 such attempts, per PFF. His completion percentage on those throws is a solid 41.4 percent, 11th-best in the NFL since 2020 per PFF.

Upon trading for Hill, Miami signed him to a four-year, $120 million contract extension through 2026. Making him the NFL's highest-paid receiver with an average salary of $30 million annually means you're paying to see fireworks. More deep pass attempts from Tagovailoa will be needed for the Dolphins to get their money's worth.

"I do want to just give you [media and fans] the keys to the kingdom, but I'm not sure from a competitive advantage standpoint that would make much sense," McDaniel said at Tyreek Hill's introductory press conference. "I will say that with players of dynamic skill sets such as Tyreek -- which, if there are other players that have his combination of skill, that group is small -- there's no real ceiling in terms of the ways that you can involve him. And there's certain things that I know that myself and the coaching staff haven't even thought of yet, that will come on our plate."

Prior to Miami trading for Hill, consensus was that there was no way the Dolphins were going to win the Super Bowl with their odds at 70-1, especially since the two-time defending AFC East champion Buffalo Bills are the odds-on Super Bowl favorites at 7-1. However, after adding the NFL's premier deep threat to an offense with one of the most prolific rookie receivers in league history, Miami's Super Bowl chances jumped to 50-1 and currently sit at 30-1, via Caesars Sportsbook. Having a head coach in McDaniel who has proven to maximize his offensive talent wherever he goes makes the Dolphins one of the more dangerous sleepers who could make some noise this season. Read More