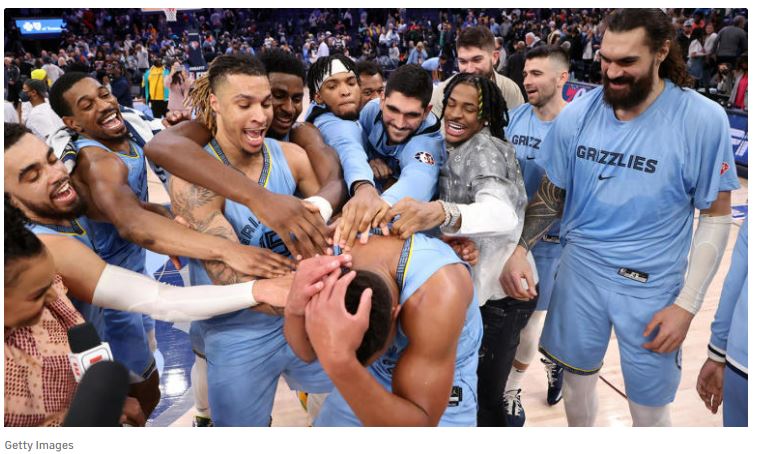 We're in the final days of the NBA regular season and the Memphis Grizzlies should have been able to relax. They are up four games on the Warriors in the standings with the second-best record in the Western Conference, as well as the NBA. But with wins in their final two games, this season's team can break the franchise single-season wins record that was set by the "Grit and Grind" era led by Mike Conley, Zach Randolph and Marc Gasol in 2012-13.

The Grizzlies are still searching for opportunities to improve in their final games this week despite their seeding being secured.

"You look at where the health is in our decision-making, competitive chemistry as well, so it's truly going to be taken one day at a time to see how guys respond after each game," Grizzlies coach Taylor Jenkins said prior to their 121–15 overtime loss at the Jazz on Tuesday. "It's a great opportunity to attack each game since we have confidence in the health factor and if there's an opportunity to maintain our competitive chemistry, I'm going to go for it.

"We're going to rely on feedback from the medical team, what our coaches are seeing, and how the players are responding. We've managed that all season long and we're in a unique position here because you always want something to play for. With us, it's rhythm and making sure we're ending the season on a high note, but also to prepare for hopefully a deep playoff run. One day at a time."

Most wins in single season for Grizzlies:

A significant factor in Memphis being able to "maintain competitive chemistry" through the end of the regular season and not participate in too much load management is their youth. The Grizzlies are the second-youngest team in the NBA with an average age of 24 years old, according to RealGM. Only the Thunder (23.2 average age) are younger than the NBA's second-winningest team this season. The oldest players on the team are starting center Steven Adams and forward Kyle Anderson, both 28 years old. Forward Dillon Brooks as well as guard Tyus Jones can be categorized as "old guys" on this team at 26 and 25 years old, respectively.

This roster composition comes from hitting on picks on both ends of the draft. Face of the franchise point guard Ja Morant (second overall pick in 2019) and starting forward Jaren Jackson Jr (fourth overall pick in 2018) coming via the lottery. In the last five years, the front office has filled out the roster through the bottom of the first round as well as the second round (forward Brandon Clarke, No. 21, 2019; guard Desmond Bane, No. 30, 2020; forward Xavier Tillman, No. 35, 2020, and forward Dillon Brooks, No. 45, 2017). Trades have put the finishing touches on the team with the acquisitions of Adams and their top bench scorer De'Anthony Melton.

Third-year head coach Taylor Jenkins has molded this fresh-faced bunch into a top-tier defense (seventh in defensive rating last season, fifth this season) and the most aggressive offensive team in the NBA in each of the last two seasons. The Grizzlies have the second-highest scoring offense (115.4 PPG, behind only the Timberwolves) because they've led the league in fastbreak points per game (17.6 PPG), points in the paint (57.6 PPG), offensive rebounding (14.1 ORPG), second-chance points (18.6 PPG) with just under a fifth of their possessions coming in transition (19.1 percent, highest in the NBA). 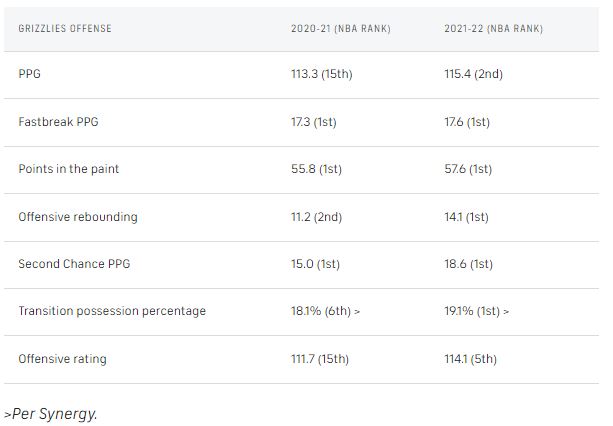 It may be easy to forget that in the lead-up to the 2019 NBA Draft, teams were praying to win the lottery for the right to select Duke forward Zion Williamson first overall. However, Morant has been the shining star of that draft class, exploding in Year 3 to become a top-10 scorer (27.6 PPG) while shooting career-highs in field-goal percentage (49.3 percent) and 3-point field-goal percentage (34.0 percent). He's also elevated, figuratively and literally, from being one of the best 20 to 30 players in the league at scoring inside and in transition to one of the league's best in both areas.

Morant is the first guard in more than 25 years to lead the NBA in points in the paint (16.8 paint PPG), which is when the NBA began tracking that data (since the 1996-1997 season). He stands at 6-foot-3, 174 pounds. Every other player behind him in the top five is at least half a foot taller.

About a quarter of those points in the paint come in transition (4.4 fastbreak PPG), which is the second-most points in the NBA behind freight train LeBron James (4.8 fastbreak PPG). The rest of Morant's output down low comes from electrifying plays like this dunk over three Spurs players on Feb. 28.

In that game, Morant set the Grizzlies' single-game scoring record with 52 points in 34 minutes played. The previous Memphis single-game record he broke that night had belonged to himself after he scored 46 points in 36 minutes on Feb. 26 against the Bulls, the game played two nights earlier. Morant's 52-point performance in under 35 minutes made him the ninth player in NBA history to score that many points in under 35 minutes, and the company he keeps in that group is some of the most prolific scorers in NBA history: George Gervin, Kobe Bryant, Karl Malone, James Harden, Klay Thompson, Kyrie Irving, Larry Bird, and Tracy McGrady.

This dude Ja Morant dunked and posterized everyone from HERE. pic.twitter.com/ahy1WXxafC

According to Hall of Famer Allen Iverson, Morant's rise to being an NBA MVP is a when, not an if.

Grizzlies are greater than sum of parts

For all of Morant's individual greatness, Memphis has needed to learn to live without him as he's missed the last nine games, and 24 games over the entirety of the season. Stunningly, the Grizzlies have won 20 of their 24 games without Morant, including seven of the last nine games he has missed since March 20 with a knee injury. Memphis' improved defense in games without their leader has offset his missing offense.

These wins without Morant aren't just coming against lesser opponents. The Grizzlies defeated the Suns, who have the best record in the league (63-15), who were playing their regular starting-five on April 1. Memphis was without four of its best players: Morant, guard Desmond Bane (left ankle soreness), center Steven Adams (left calf soreness), Tyus Jones (left hand soreness) and forward Jaren Jackson Jr. (right thigh injury) in their 122-114 victory.

"We're competitive, every time we step on the floor we think we're going to win," guard Jones said.

"Guys play to their strengths," Jenkins said when asked how the Grizzlies nearly pulled off an upset win in a 121-115 overtime loss at the Jazz (10th-best defensive rating in NBA) without Morant on Tuesday. "Obviously Tyus [Jones] is playing beautifully. Their game plan was to limit him and especially take Des [Bane] away. JJ [Jaren Jackson Jr.] with his aggressiveness started shooting 3s at the end of the game, getting downhill for finishes and getting to the free-throw line. Cutting and moving, Steven [Adams] ends up with eight assists and that's how we play. They play to their strengths and guys are trying not to skip a beat with guys out."

Not many teams have the luxury of a backup point guard like Jones, the NBA's leader in assist-turnover ratio among players who have played in a minimum of 50 games in each of the last three seasons. Jones is averaging a career-best 8.8 points per game and 39.0 3-point shooting percentage to go along with his career-high of 7.1 assists-to-turnovers this season. He scored 24 points (his 3rd-most this season) on 10 of 19 shooting from the floor and a perfect 4 of 4 from behind the 3-point line against the Jazz.

"I just have confidence in finding my spots because guys have been trusting and believing in me from coach Jenkins and the staff. Everyone is just telling me to go lead," Jones said. "They say to just be me, and they'll follow my lead, so whether it's making plays for my teammates, myself, taking open looks, I just try to do that with confidence and without hesitation. Everyone is allowing me to be me, so I feel like I'm in a good flow and rhythm. I just have to keep it going."

Another player who has stepped up his game not only in Morant's absence, but during the Grizzlies' rise this season is former first-round pick Desmond Bane. Selected with the final pick of Round 1 in 2020 after four seasons at TCU, his 3-point shooting immediately translated, shooting 43.2 percent from beyond the 3-point line as a rookie after shooting over 40 percent from distance in each of the last three seasons for the Horned Frogs.

This season, Bane is once again shooting a 43.2 percentage from behind the arc, which is the third-best in the NBA behind only Clippers guard Luke Kennard (45.0 percent) and 76ers guard Tyrese Maxey (43.5 percent). Since the Grizzlies traded away guard Grayson Allen before the season, Bane has been elevated to the starting lineup and is averaging 29.9 minutes per game, the second-most on the team behind Morant.

His scoring has doubled this season averaging 18.2 points per game in Year 2 after putting up 9.2 points per game in 22.3 minutes a night in Year 1. Bane is averaging 21.5 points per game on a 50.8 shooting percentage, and a 56.9 3-point shooting percentage in the eight games he's played during Morant's nine-game absence over the last two weeks. Despite only playing in one playoff series, Bane exuded the confidence the Grizzlies have carried themselves with all season, jawing with LeBron James in the Grizzlies' 127-119 road win in Los Angeles back in January.

"We have pride, and we're still trying to improve because we know the postseason is when things ramp up and go to another level," Jones said. "We still need to continue to improve, we can't take these last few games off and try to flip the switch in the playoffs. We have to continue to work on things and build our habits as Coach [Jenkins] always says to try to continue to play good basketball into the playoffs."

All that being said, the Grizzlies obviously will need Morant come playoff time. Jenkins said prior to their game in Denver against the Nuggets on Thursday that Morant is "progressing really well" in his recovery.

"We've ramped him [Morant] up over the last week or so, he's getting close," Jenkins said on Thursday. "We're going to continue to take it day-by-day. He [Morant] did do five-on-five [Thursday], which is really encouraging, and he responded well afterwards. We would love for the full contingent to be together to get one more game under our belt before the playoffs, but if that's not the recommendation of the medical team, then we won't do it."

Not many players have the ability to pull off the kind of acrobatic, buzzer-beating shots that Morant has shown he's capable of this season. Shots like this one from that Feb. 28 night against San Antonio could potentially be the difference in how far Memphis goes in the postseason.

"Ja [Morant] is one of the best players in the league, so obviously having him ... is huge for us," Grizzlies forward Brandon Clarke said on Thursday. "He's the motor for our team. We're a good team without him, but with Ja [Morant], we're great."

When the season started, not many people looked at Memphis as being a challenger to Phoenix or Golden State to win the West. They were +5000 to win the Western Conference prior to the start of the season. Entering the playoffs, they are now +650 to reach the NBA Finals. Thanks to an all-time superstar in the making and his youthful supporting cast, they are looking now. Read More