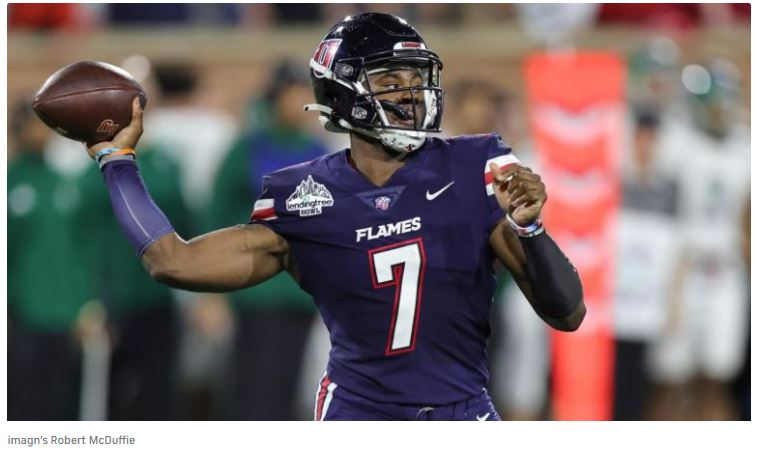 The 2022 NFL Draft is not the 2021 NFL Draft when it comes to "can't miss" prospects at the quarterback position. It will most likely not match the Common Draft Era (since 1967) record of five taken in the first 15 selections a year ago (tied with 1999 for most taken in first 15 picks).

However, plenty of NFL teams enter each offseason unsatisfied with their guy at the game's most important position. After all, not every team has an Aaron Rodgers, Tom Brady, or Patrick Mahomes.

For teams in need of a quarterback of the future, look no further than Liberty's Malik Willis. He has the draft's most powerful arm and the best running ability at the position, using both to find the end zone more than any other quarterback in this class during his two seasons (2020-2021) as the Flames' starter.

Here's more on why Willis should be the first signal-caller off the board on draft night.

Watching Willis throw deep can put a smile on any football fan's face. The football sails through the air with smoke steaming off it with each tight spiral. One of the crazier elements of the 80-second clip of his deep passes below is that whether he is standing in the pocket or rolling out to his right or left, the power on each throw seems to be exactly the same -- full throttle.

So many examples of just effortless throw power on Malik Willis' tape pic.twitter.com/jtHScivBDk

"I've had Malik Willis as my No. 1 quarterback for a while. Navigating the pocket and making super-sound decisions, he's raw in those areas. But the physical attributes are through the roof and align with today's young wave at the quarterback position. He's a phenomenal athlete who can become a star as a scrambler and in the designed run game and, most importantly, he's capable of making high-degree of difficulty throws to all levels of the field. His natural skill exceeds any other quarterback in this class,'' CBS Sports NFL Draft writer Chris Trapasso said.

This throw below against UAB showcases Willis' ability to make a quick decision, put himself in a position to make the best pass based on where he anticipates his receiver to be, and throw a strike for a 30-to-35-yard gain despite not having his feet set and with a defender in his face. These are the types of throws that Mahomes and Bills quarterback Josh Allen make at the next level with regularity, separating them from their peers.

Dime from Malik Willis on the run. pic.twitter.com/sGel30yxXP

One of the knocks against Willis is that Liberty, being a smaller school, doesn't give him the ability to regularly compete against the best of the best in Power Five conferences. Still, Willis made the most of his opportunity against Virginia Tech, leading the Flames to a 38-35 win on the road in 2020. In a game where Willis totaled a combined 325 yards (217 passing and 108 rushing) to go along with four touchdowns (three passing and one rushing), this throw below shines bright. His running back whiffs on his blocking assignment, leaving Willis in a bad spot against a blitzing defensive back. No problem, as he spins away and uncorks a perfect dart to his receiver for a gain of close to 50 yards while throwing off-balance.

It's an absurd throw that doesn't look all too different from a throw Rodgers made against the Dallas Cowboys in the 2016 Divisional Playoffs. A throw that put Packers kicker Mason Crosby in position to kick the game-winning field goal as time expired.

Aaron Rodgers to Jared Cook will forever be one of the greatest moments in NFL Playoff history... pic.twitter.com/mDs97gbZN0

Of course, Rodgers is doing that in the NFL playoffs, while Willis is making that throw in an uptempo, run-pass option offense at the college level against an ACC foe. Willis will surely need to expand his football IQ when it comes to learning the type of schemes run by NFL offenses, but he's confident he'll be able to succeed in any system he's placed in. In fact, when asked at the combine what type of offense he's best suited for at the next level, Willis simply responded: "One that scores points."

Another reason Willis isn't looked at as a sure thing is for as powerful of an arm that he has, his accuracy could use improvement. (Willis never had a completion percentage higher than 65% at Liberty.) But that doesn't mean he can't make significant strides in that department in short order. 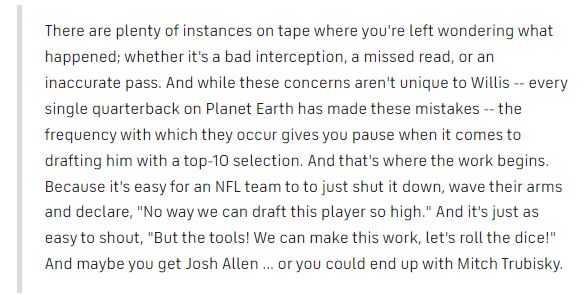 Just look at Allen, another big-armed quarterback from a small school (Wyoming) who was taken seventh overall in 2018. Allen never had a completion percentage over 60% once he became the full-time starter as a sophomore, and it wasn't until his third NFL season that he found his accuracy. Since then, Allen has been an MVP runner-up (second to Aaron Rodgers in 2020) while leading the Bills to consecutive seasons with playoff wins for the first time since the Jim Kelly era in the 1990s. He's also the only player in NFL history with more than 100 passing touchdowns (103) and 30 rushing touchdowns (31) in their first four seasons combined.

Willis admitted at the combine that his accuracy could be better, and he has a good idea of how to improve it.

"Definitely [need to work on] my footwork to try and be as consistent as I can in my base because that's where some of the flaws in my game come from, maybe some inaccuracies," Willis said at the combine. "It's from my footwork, not being inaccurate.

And even with footwork that will need to be polished at the next level, Willis has shown an ability to find success on plays as a passer even when his unrefined feet fail him, as shown at the Senior Bowl in February.

Malik Willis is FUN. Coming off of PA rollout to his right, he slips. Regains his footing and fires a hot sidearm to the TE. Sheesh. #SeniorBowl pic.twitter.com/BsKpn3TYIb

While there are some questions about Willis as a passer, there are none about him as a runner. He was college football's most elusive runner in 2021, leading the country in missed tackles just ahead of Michigan State's Kenneth Walker III, who received the Doak Walker Award as the nation's best running back. 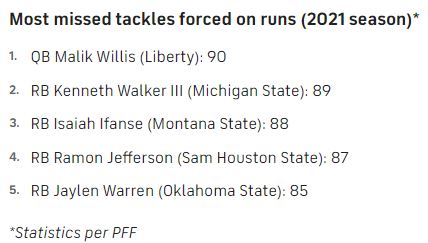 Willis did his best impression of Ravens quarterback Lamar Jackson's speed combined with Eagles quarterback Jalen Hurts' ability to shrug off defenders many times throughout college and the pre-draft process. No quarterback had more rushing yards (1,822) or rush TD (27) than Willis over the last two seasons for good reason. Players attempting to tackle Willis routinely seem to be a step slow.

Here he is at the Senior Bowl looking like the Ravens quarterback, blazing past some of the top upperclassmen in the country as he cuts back across the entire field.

Not only does Willis have high-end speed, his agility is just as strong, shown here leaving a defender from a top 20-ranked Ole Miss team in the dust. Plays like this, combined with the arm talent, are among the reasons why there's a good chance he'll hear his name called in Round 1.

This is not a QB analysis tweet so just enjoy this clip of Malik Willis juking a DB into a different time zone. pic.twitter.com/DUN5DLJHZo

On top of the cannon of an arm and the ability to cut on a dime, Willis displayed the type of off-field leadership any employer would look for, doing the right thing when no one was looking. He became a trending topic on Twitter for going out of his way to treat a homeless pregnant woman with kindness and generosity by gifting her some of the NFL combine clothing he'd been given for the week.

Overall, Willis possesses elite tools. He's not quite at Jackson's level with the speed, but he has the potential to become a top-five rusher in the NFL at the position immediately. His arm talent is remarkable, both in terms of pure power as well as touch to hit his target in several different locations around the field.

Willis didn't lead an attack that mirrors what's run on Sundays, but if an offensive scheme is built around his skill set, he could lead a team to the playoffs sooner rather than later -- just as Jackson and Hurts have done. Ultimately, a player with his ceiling is worthy of being the first quarterback off the board.

"In an ideal world, he would be drafted into a situation where he is not required to start from Day 1. It would be in his best interest to land with a team that has a veteran or bridge quarterback so that he can develop at his own pace. Teams draft traits and Willis has more upside than any other quarterback in this class. By the same token, he also carries a high level of risk as a player that has to quicken his processing and be more effective over the middle of the field,'' CBS Sports NFL Draft writer Josh Edwards said. Read More