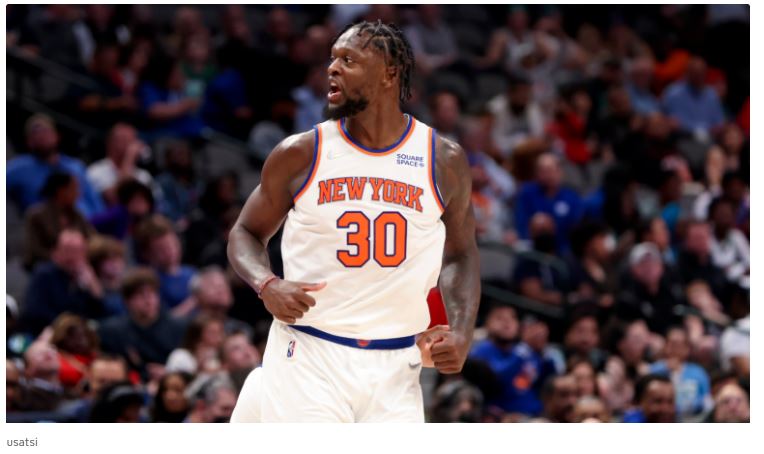 "Run it back" has become a popular rally cry for recent Super Bowl Champions in the Los Angeles Rams (2021) and Kansas City Chiefs (2019), two teams who declared they wanted to bring back essentially the same team who brought them success. In the NBA, the New York Knicks didn't outwardly utter that phrase this past offseason, but actions speak louder than words. The Knicks brought back nine of their top 12 players from their 2020-21 rotation in terms of minutes per game. Their goal: to earn consecutive playoff appearances for the first time in nearly a decade (made three straight playoff appearances from the 2010-11 season through the 2012-2013 season). Who wouldn't want to retain the foundation of a team that won 16 of their final 20 regular-season games?

All of those moves have led to a near-repeat performance by the Knicks as a top defensive team. New York was the NBA's best defense last season, earning their head coach Coach of the Year honors in his first season at Madison Square Garden. Tom Thibodeau's teams have boasted top 10 scoring defenses in seven of his 10 seasons as an NBA head coach. 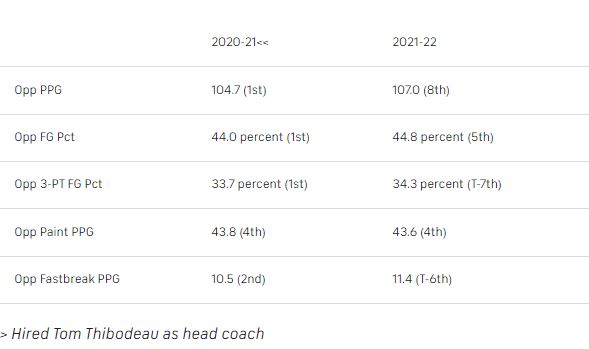 Offensively, the team's numbers are also similar except for their 3-point shooting as their top two shot-creators, Randle and Rose, have been unable to replicate their breakout seasons.

Randle averaged 24.1 points, 10.2 rebounds and 6.0 assists while playing the most minutes in the NBA (37.6 MPG) last season, his second season with the Knicks. Those are both career highs in points and assists plus Randle matched his career-high in rebounds. He ranked in the top 20 of the NBA in all three categories.

Randle's 2020-21 season totals made him the sixth player in NBA history to average at least 24.0 points, 10.2 rebounds and 6.0 assists in a season, joining Nikola Jokić (who is doing so once again this season), Russell Westbrook, Larry Bird, Wilt Chamberlain, and Oscar Robertson. Randle additionally drained a career-high 160 3-pointers in 2020-21, eight fewer than his total from the first five seasons of his career (168). He shot 41.1 percent from the 3-point line, 6.7 percentage points higher than his prior career-best of 34.4 percent from the 2018-19 season. Randle also shot a career-high 81.1 percent from the free-throw line after never shooting higher than 76 percent before.

"All my teammates, everybody, they trust me and empower me," Knicks forward Julius Randle said upon winning the 2020-21 Most Improved Player award. "I just want to thank them for allowing me to lead them. Then my family, my wife, my son, everybody. Everybody has played a part in helping me continue to become the best version of me on and off the court."

Randle joined exclusive company with a few others who have averaged 24-plus points, 10-plus rebounds, six-plus assists per game in a single season:

Randle mentioned being empowered by his teammates en route to his career year last season, and one reason why he and the Knicks' offense have taken a step back this season is the absence of their No. 2 playmaker (4.0 APG, second on team), Derrick Rose. Rose also led the Knicks come playoff time a year ago, averaging a team-high 19.3 points per game in their five-game, first-round series loss vs the Hawks. Randle credited Rose with helping him become a better leader in December.

"I had a long talk with Derrick [Rose] because I'm an introverted person too," Randle said in December. "I'm [the type to] lead by example, my actions and stuff like that, and he's telling me how it took him a long time to figure it out."

Randle has shot the ball better this season when Rose has played, but the problem is the former NBA MVP hasn't played since Dec. 16 because of an ankle injury. After undergoing surgery on Feb. 25, Rose likely won't play again this season after suiting up just 26 times.

Julius Randle with a without Derrick Rose this season:

Attempts to utilize Kemba Walker, Alec Burks, or Evan Fournier as primary ball-handlers haven't ignited the offense, and Randle's frustration is beginning to show. Despite the Knicks defeating the Bulls 109-104 on Monday, Randle threw the basketball seemingly in disgust and quickly walked off the court after securing the final rebound.

"I missed five games in three years -- two of them were my grandmother's passing and two were COVID," Randle said on Sunday. "When it comes to actual injury, I've missed one game in three years. It lets you know I'd rather play through pain, but for this one, I had to force myself to sit down and take the time to get myself right."

One bright spot for Randle and Co. this season has been the play of RJ Barrett, who is averaging a career-high 20.1 points per game at 21 years old. He is the only player in Knicks history to average at least 20 points per game at the age of 21 or younger. Barrett has scored 25 or more points in four of his last six games including a team-high 28 in the Monday win vs the Bulls. His production has helped New York win four of their last five games.

"First of all, we fight, so that's [giving up] not an option for us," Barrett said after the Knicks' win over the Bulls on Monday. "We fight no matter what. We're a very good team and we've been disappointed with how we started the season, but we're a very good team and we're pulling out these wins. We're scratching and clawing and playing very well. So when you have something like that, you try to build on it."

Even though his growth wasn't enough to get the Knicks back to the postseason, Barrett has given the Knicks a budding co-star for Randle or a new solo act to build around going forward. Read More