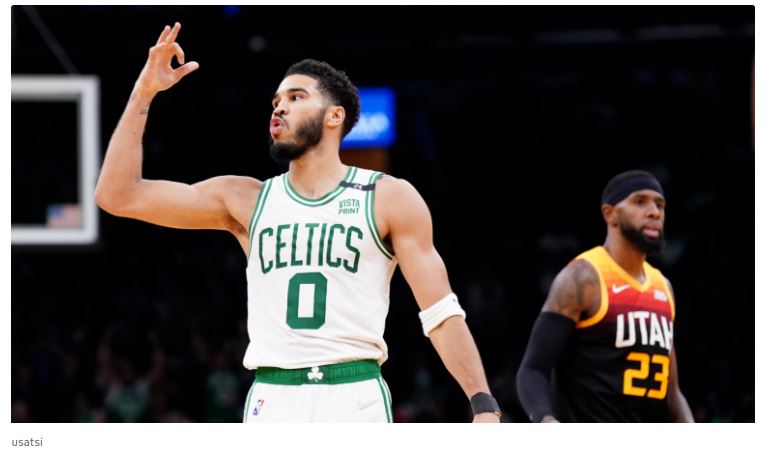 After starting this season with a 23-24 record, the Celtics have won 23 of their last 27 games entering Friday and within two games of the No. 1 seed Miami Heat in the Eastern Conference. Boston is 46-28, sitting mere win percentage points behind the Philadelphia 76ers, half a game behind the defending champion Milwaukee Bucks, and one-and-a-half games behind the Heat with about two weeks left to play in the regular season.

The Celtics' playoff chances looked slim on Jan. 22 as they were sitting a game under .500, clinging to the 10th and final play-in game spot in the East. Boston's lack of ball movement had been an issue since the start of the season, and it led guard Marcus Smart to call out the team's All-Star wings, highest-paid players and leading scorers Jayson Tatum (27.0 PPG) and Jaylen Brown (23.2 PPG) early in the season. The Celtics' lack of ball movement translated into an assist percentage (percent of made baskets off assists) of 58.4 percent, which ranked a lowly 21st in the NBA through its first 47 games.

"I would just like to play basketball, every team knows we're going to Jayson [Tatum] and Jaylen [Brown], and every team is programmed and studies to stop Jayson and Jaylen," Marcus Smart said after a 128-114 home loss against the Bulls on Nov. 1 in which the Celtics blew a 19-point lead. "I think everybody's scouting report is to make those guys try and pass the ball. They don't want to pass the ball, and that's something that they're going to learn. They're still learning and we're proud of the progress they are making, but they're going to have to make another step and find ways to not only create for themselves but create for others on this team, to open up the court for them later in the game where they don't always have to take those tough shots or take tough matchups when they do get the 1-on-1."

The fire Smart lit took hold, and the Celtics have gone 23-4 in their last 27 games. The 2021-22 Celtics are the NBA embodiment of Paul Rudd's memeable line, "Look at us huh, who would've thought? Not me."

Tatum, who is averaging a career-high 27.0 PPG this season which helped lead to a third straight All-Star selection, detailed the Celtics' adjustment period with Jenny Dell on CBS Sports HQ on Tuesday, citing a variety of factors.

"Honestly, it just got to a point in the season where we got healthy from COVID and other various injuries, that had us off to a rocky start," Tatum said. "Also having a new coach and staff took time to get adjusted more than others expected and more than we would've liked. At the same time through the ups and downs, we knew where we wanted to get to and we always believed in ourselves. We knew we were close, and once we clicked, we started having fun and competing."

After eight seasons (2013-21) of being led by head coach Brad Stevens, hearing a new voice in the huddle resulted in a slow start even though that new voice, Ime Udoka, came with seven seasons of NBA playing experience and nine seasons as an NBA assistant coach. However, Udoka's vision has come to fruition, and he also credited time and a return to health.

Brown missed 14 of the first 27 games this season with a hamstring strain, but he has averaged 23.8 PPG since -– putting that injury in the rearview mirror in mid-December. Things began to click following Smart's return to action after missing six games in a row with a calf strain from Jan. 12-21.

"It's [Celtics defense] suffocating [our opponents] at times, with our size and versatility," head coach Ime Udoka said. "We've got big wings, our bigs, and obviously a pitbull [Smart] for a point guard. There's no real weakness out there, nobody to pick on, which is the case with other teams sometimes. We're getting off to really good starts, which is different to earlier in the year, but it's understandable with the amount of up-and-down we had earlier in the year, and it's coming to fruition now we have some consistency back with our line-ups."

During their 23-4 stretch since Jan. 23, the best record in the NBA in this span, the Celtics have morphed into the NBA's stingiest scoring and field goal percentage defense. Boston has held 14 of its last 27 opponents to fewer than 100 points, and they have limited their opponents to 42 PPG in the paint, the fewest in the NBA.

This transformation has allowed the Celtics to stake a claim as the NBA's best overall defense this season, as the rankings show.

When asked by reporters what has been behind Boston's turnaround following a 115-101 win at the Hornets on March 9, Tatum gave a succinct response.

Tatum thriving in a multi-faceted Celtics offense
Having an air-tight defense allows the Celtics to get away with being the only team that's a top-four seed in either conference to not have at least three players averaging over 15 points a game. Tatum and Brown have heeded Udoka's and Smart's pleas as the Celtics' assist percentage increased by 5.3 percent since Jan. 23. That improvement catapulted Boston from the bottom 10 in the league to the top 10 in the league in terms of sharing the basketball. The Celtics' 8.2 PPG uptick is the difference between ranking first and 24th in scoring offense this season while the four percent jump in field goal percentage is the difference between first and 25th in that category.

"They've bought-in on the defensive side of the ball effort-wise, and offensively sharing it," Udoka said after a 105-95 win against the Hawks on Feb. 13. "You see the difference as far as that. It just takes a little time, it's not going to happen overnight and I understand that. So, once they all buy-in, and like I said, they've all been receptive to coaching and criticism and challenging them, and so I love the group for that."

The Celtics showcased their increased unselfishness on Wednesday night in a dominant 125-97 home win against the Jazz. Boston made its first 10 shots, the longest streak to begin a game in the NBA this season, with eight of those makes coming off assists. They finished the game with a season-high 37 assists as Tatum and Brown each had a team-high 26 points. Even with increased ball movement, the Celtics' offense goes as Tatum goes for good reason. He's a historically prolific scorer for a franchise that's as storied as it gets. Tatum's 36-point outing in a March 21 road win at the Thunder gave him his 25th career game with 35+ points, the most by a Celtics player at the age of 24 or younger.

Most games with 35+ points at age 24 or younger in Celtics history:

He's also been one of the most clutch scorers in the league, as Tatum's 92 points in the clutch, the last five minutes of a game when a team is leading or trailing by five points or fewer, are the ninth-most in the NBA this season. Tatum is heating up just in time for the Celtics to solidify their playoff seeding, averaging 33.6 PPG in March, the third-most in the NBA this month. One reason for the best scoring season of Tatum's career - despite shooting a career-worst 35.4 percent from the 3-point line – is his improvement down low. Tatum is shooting a career-high 49.1 percent from the field out of the post this season per Second Spectrum. That mark is the 13th-best in the NBA among forwards who average over 50 post touches a game. 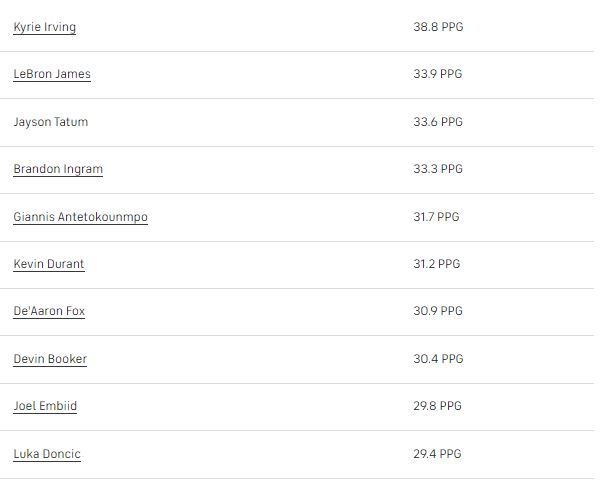 "After the All-Star break is when you want to play your best basketball with the stretch before the playoffs," Tatum said. "That's what we're doing. Hopefully, we stay healthy and continue to play this way into the playoffs, see who we play in the first round and go from there."

Having won 85 percent of their games over the last two months, the streaking Celtics have Boston fans dreaming about where banner number 18 could hang at TD Garden. Read More