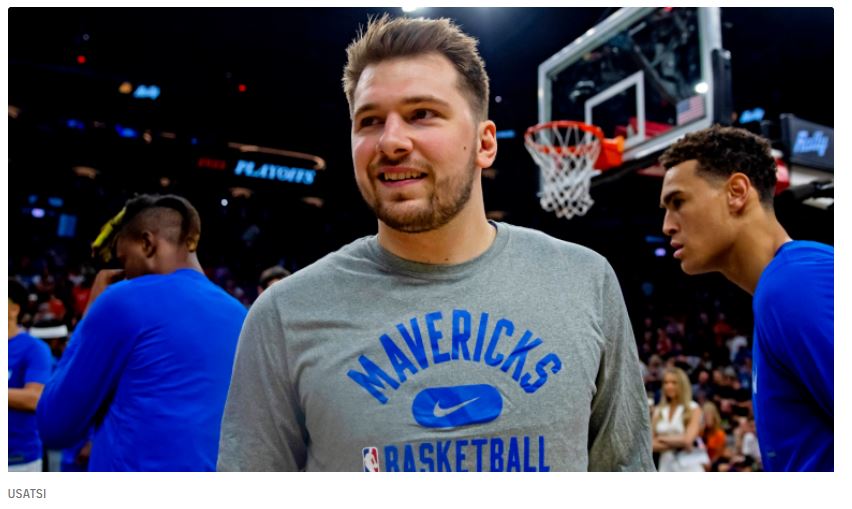 Luka Doncic leading the Dallas Mavericks to their first Western Conference Finals appearance in 11 years at the age of 23 is impressive on a variety of levels. However, the Atlas-like way Doncic has carried the Mavericks on his shoulders to the NBA Final Four is historic stylistically in that it's only been replicated two other times in league history when NBA MVP Allen Iverson did it with the Philadelphia 76ers in the 2000-01 season and when NBA MVP James Harden did it with the Houston Rockets in the 2017-18 season.

Harden's Rockets flamed out in the Western Conference Finals, but Iverson's 76ers did reach the NBA Finals where his individual brilliance wasn't enough to overcome the Los Angeles Lakers with a peak-of-his powers Shaquille O'Neal and a rising Kobe Bryant.

Doncic had the basketball in his hands this regular season on 37.4 percent of the Mavericks plays, which is the eighth-highest single-season usage rate in NBA history. Can Luka, unlike Iverson and Harden before him, become the ultra-high-usage superstar who leads his team to a title? Here's why this season's Mavericks could be different.

How Dallas came to lean this much on Luka

When the Mavericks traded for All-Star forward Kristaps Porzingis - who was coming off an ACL injury in 2019 - and signed him to a 5-year, $158.3 million extension, owner Mark Cuban envisioned another franchise pillar alongside Doncic.

"Our goal is to keep these two together for the next 20 years," Cuban said at Porzingis' introductory press conference in February of 2019.

Porzingis missed 112 games with various injuries over the last three seasons while on the Mavericks before Dallas pulled the plug, sending him and a 2022 second-round pick to the Washington Wizards for guard Spencer Dinwiddie and forward Davis Bertans at the Feb. 10 trade deadline.

Luka this season before & after the Porzingis trade

The Mavericks putting more shooting on the floor around Luka with players like Maxi Kleber and Bertans seeing more time in the frontcourt allowed Doncic and the Mavericks offense to reach another level with more space.

"There's a lot of spot-up capabilities on this team," new Mavericks guard Spencer Dinwiddie said in March. "We're taught to stay spaced, and that makes pretty big gaps for somebody like me who likes to get into the paint."

That space, provided by the Mavericks shooting 37.5 percent from the 3-point line (ninth-best in NBA from Feb 10 through end of regular season), also opened up "pretty big gaps" for Doncic to get into the paint. He averaged an NBA-high 23.4 drives per game following the trade while scoring 13.9 points per game on those drives, the third-most on drives to the hoop from Feb. 10 to the regular season's conclusion.

Now entering the Western Conference Finals, Doncic has maintained the on-ball dominance, leading the playoffs in usage rate (40.5 percent) and is second in scoring (31.5 PPG) behind Giannis Antetokounmpo (31.7 PPG). Luka's usage this postseason is on pace to be the highest ever in a single playoff run that lasted at least 10 games. Incredibly enough, Doncic's usage hasn't compromised his efficiency as his 30.1 player efficiency rating (PER) in these playoffs ranks inside the top 20 for single playoff runs in NBA postseason history. Neither Harden (24.9 PER) in 2017-18 nor Iverson (22.5 PER) in 2000-01 had a PER over 25 in their postseason journeys. 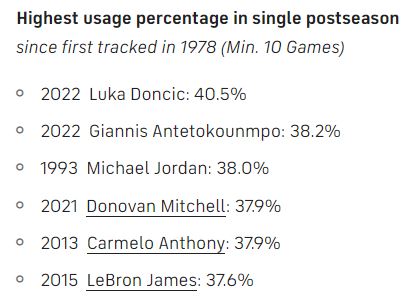 His 22.4 drives per game are the most in the playoffs as are his 14.6 PPG on those drives. Among the teams to advance out of the first round of the playoffs, the Mavericks have been the best 3-point shooting team (38.5 percent).

It's understandable why head coach and Hall of Fame player Jason Kidd would continue to put the ball in the hands of his best player – over and over again, especially in the playoffs. Doncic is averaging 32.7 points per game in his 23 career playoff games, second only to Michael Jordan's 33.4 career playoff average among players with at least 20 career postseason appearances. 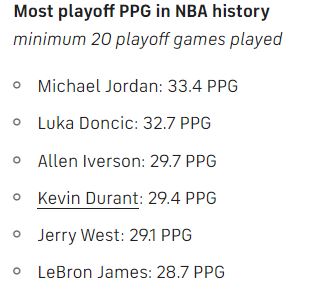 Why Doncic's Mavs could achieve a different outcome

Iverson had the Defensive Player of the Year in Dikembe Mutombo as his primary support en route to carrying the 76ers to the NBA Finals in 2001, but he didn't have a teammate who averaged at least 15 points per game in the regular season or postseason. James Harden had two teammates averaging at least 18 PPG in the regular season (Chris Paul and Eric Gordon), and Paul raised his level of play to average 21.1 PPG in the playoffs. Harden's Rockets didn't have a top-five team in defensive rating like Iverson's 76ers, but they were top 10 (seventh). If not for Paul's hamstring injury in the Western Conference Finals against the Warriors, perhaps things may have gone differently for those Rockets four years ago.

However in 2022, Doncic has two teammates who can threaten a defense with their play-making and scoring, in Jalen Brunson and Dinwiddie, and a top 10 defense (7th in defensive rating this regular season). Having two creators and perimeter scorers outside of Luka has helped keep the Mavs in the green when Doncic takes a breather.

Brunson has averaged 22.9 PPG in the playoffs, a little over six-point increase from his regular season number of 16.3 PPG, and Dinwiddie showed up in the biggest game of the season with a playoff career-high of 30 points on 11 of 15 shooting. In Sunday's 123-90 win over the Suns, Dinwiddie combined with Doncic (35 points) to become the first pair of teammates to both score 30 or more points in a Game 7 since Kobe Bryant and Shaquille O'Neal in the 2002 Western Conference finals. The 33-point win was the second-largest win in a series-clinching game vs. the league's best regular season team in the NBA in league history. Only the 1948 Philadelphia Warriors, who won by 39 points over the St. Louis Bombers in the BAA Semifinals had a more lopsided victory over a top overall seed.

"You can't get this smile off my face right now," Doncic said after the Game 7 triumph in Phoenix. "I'm just really happy."

Overall, Dallas has been happy with their supporting cast as they have out-scored opponents by 34 points in 213 minutes when Brunson and Dinwiddie played without Doncic in the regular season and by two points in 179 minutes in the playoffs. Between Doncic playing like one of the best five players in basketball history in the playoffs and the other guys doing enough, it's been "special" enough to get the Mavericks this far.

"This team is special...we play hard and we help each other..." - @luka7doncic pic.twitter.com/KzVbW8HVsV

While the all-the-time offensive usage rate for Luka likely isn't sustainable long-term, as both Iverson's and Harden's teams failed to advance past the second round since their historic runs, getting more support long-term is a problem for Dallas general manager Nico Harrison to fix in the offseason. Now just eight wins away from the second championship in Mavericks history, Luka may have just the right supporting cast this season to lift Dallas to the NBA's mountaintop. Read More