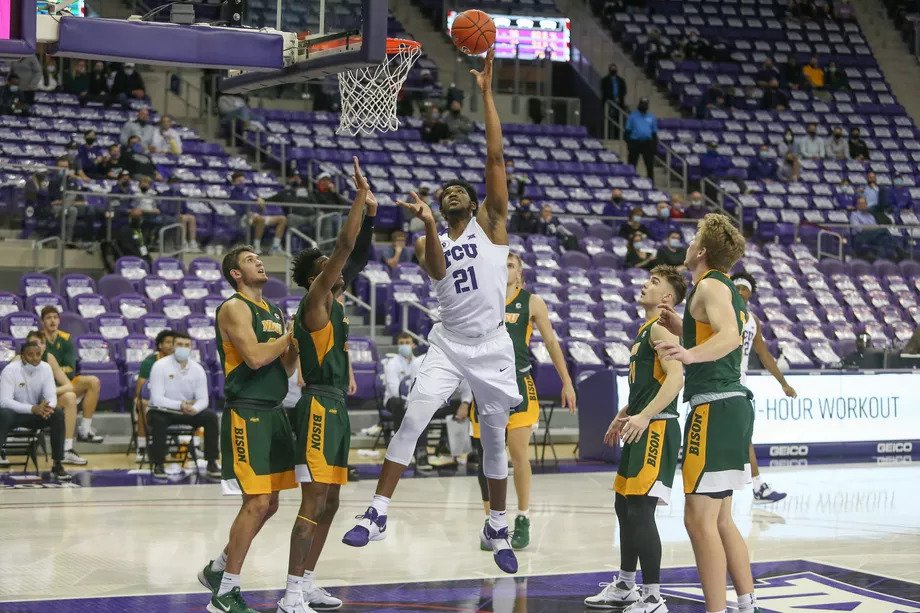 The Tampa Bay Buccaneers proved defense wins championships in football this season in their 31-9 demolition of Patrick Mahomes and the Kansas City Chiefs. However, that cliché hasn’t quite held up in Big 12 play this college basketball season despite TCU head basketball coach Jamie Dixon’s emphasis on that side of the ball.

When asked about needing more of an offensive threat from the big men in his pick-and-roll motion offense, Dixon immediately re-focused the conversation to defense.

“We are looking at each of our guys’ shooting and rebounding numbers, and we really focus on the defensive part of it because it’s not that RJ, Mike or Kevin isn’t scoring as much, it’s just that everyone has to play better,” Dixon said. “We have to defend first, so that we can get some steals, deflections, rebounds, and get out in transitions.”

Although Dixon noted better offensive decision-making for a team that averages 13.7 turnovers a game (7th out of ten Big 12 teams) is also critical in the Horned Frogs’ success.

“We have to make better decisions. Teams try to take away dribble penetration from us in the half-court, so we have to do a better job of finding the open guy and we have to finish around the rim better and get more offensive rebounds,” Dixon said. “We have to take care of the basketball, turnovers have hurt our offense. Kevin [Samuel] has to play better, but so does RJ [Nembhard], Mike [Miles], and everyone on our team at offense and defense. We have to understand that. When things don’t go well, our guys think offense first. That shows to me that we aren’t going to win by out-scoring teams, we have to stop them. It’s a mentality we have to get across to our guys, we have a young, inexperienced group. The teams we have lost to are all good defensive teams and that’s what got all of those offenses going.”

Notice the emphasis on finding the open guy and finishing better around the rim. TCU runs a high pick and roll at the top of the key either involving starting center Kevin Samuel or reserve forward JaeDon LeDee at the start of nearly every possession. Making teams respect the big guy rolling toward the hoop, specifically when it’s Samuel, changes the game for the Horned Frogs.

TCU is 7-1 when Samuel scores double-digit points with their only loss in such games coming against Providence on December 9. When Samuel is scoring, TCU is winning. Teams have to respect the 6’11, 255-pound behemoth running at the rim, which frees up dribble penetration room for Nembhard, Miles, and others at the top of the key. Samuel serving as an offensive threat also presents an opportunity for better looks from the three-point line when defenses are forced to collapse on him in the paint. In their consecutive wins against 23rd-ranked Oklahoma State and Iowa State, Samuel has scored 14 points and 10 points respectively.

To use Dixon’s words, “a better decision” that will likely lead to more wins as TCU attempts to make a push for March Madness is to get the ball to Kevin Samuel around the rim. Read More