Dug in on Duggan? 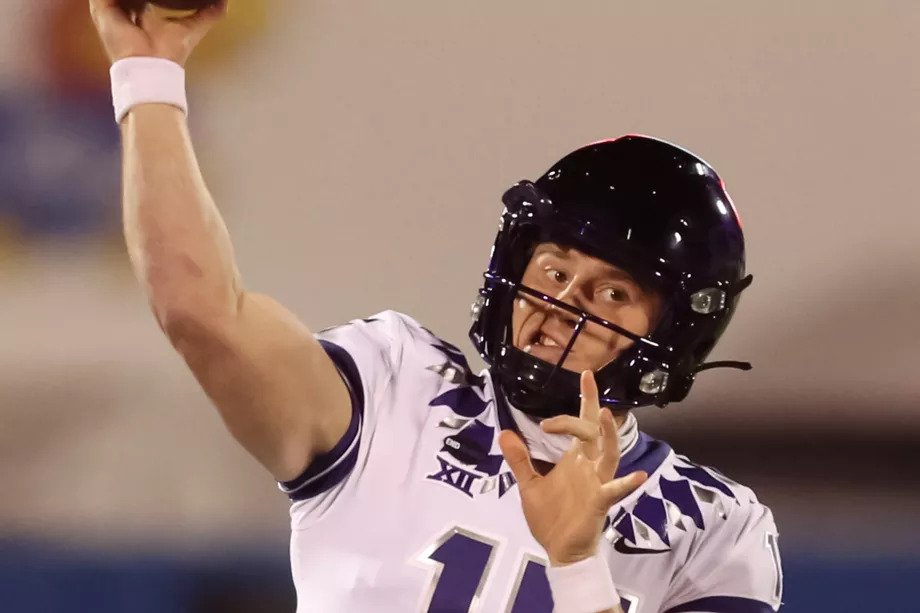 Max Duggan’s stat line included 3 completions on 11 pass attempts, 96 passing yards, and 3 passing touchdowns in last week’s Horned Frogs 59-23 demolition of the winless Kansas Jayhawks. Max’s passing performance can be interpreted as efficient when looking at how all three of his completions were touchdowns. Or, it can be viewed as a missed opportunity. When zeroing in on TCU’s clear-cut edge in the run game, they ran for an eye-popping 8.2 yards per carry en route to 337 rushing yards. The Horned Frogs could have seemingly called any play, and it would have worked. To Duggan, it was following the game plan without deviation.

“It starts up front, when you’re able to run the ball, it helps a lot with everything else you want to do,” TCU quarterback Max Duggan said.

That type of success on the ground makes it sound like Derrick Henry, the NFL’s leading rusher, faced the home team in Lawrence. While establishing the run and getting experience for true freshman running back Zach Evans, the nation’s No. 2 running back recruit according to 247Sports.com, who had his first career game with 100 rushing yards is encouraging for years to come, what about the quarterback? Duggan’s completion percentage (61.7%) is up 8.3 points from his first season, and he’s on pace for single-digit interceptions after throwing 10 a year ago. Those are steps in the right direction.

However, his passing yards per game total (171.1) is nearly identical to a year ago (173.1), and the eye test is showing the same flaws an offseason of development would have hopefully fixed. Due to the pandemic, Duggan clearly didn’t have the chance to work through things like accuracy in the intermediate passing game or honing his ability to dial up or down the miles per hour on his passes depending on the distance of his target.

“So we didn’t have spring ball, and he’s [Duggan] just going to go into a true sophomore season, and then he misses basically between a month and a half and two months of practice while we’re all practicing,” TCU head coach Gary Patterson said. “The key is when you develop an offense, you develop an offense of what, how they work with somebody, what their positives, negatives are, all the practice time that you miss, you just take him as one example of all the time that he missed where he couldn’t be out on the field. He couldn’t lift, he couldn’t run. He couldn’t do anything, you know, because of the heart situation. So, I mean, you just take that one example. Where would he be right now if he had spring ball and he had all those practices during fall camp and went through all of it to get to a point as far as throwing the football and doing things?”

The answer to that question will remain unknown due to man’s inability to go back in time, but TCU’s play-callers could have helped Patterson glean a partial glimpse last Saturday. The Horned Frogs led 24-0 with just under four minutes to play in the first quarter. TCU could have gone line by line out of their playbook to test Duggan’s in-game execution of almost every play in their arsenal against a defense he doesn’t practice against every day. Instead, it was a steady diet of deep-ball play calling, which had worked and was likely to continue working because it’s winless Kansas. Running a varied set of passing plays may have revealed to the TCU coaching staff if Duggan has an issue with the actual depth of the routes on intermediate throws, the time his offensive line normally gives him against non-Kansas teams, or if it’s a lack comfort due to a lack of established success on such plays.

No. 15 Oklahoma State, the conference third-best pass defense, likely won’t provide such opportunities this week. After that, it’s Louisiana Tech on December 12. The goal for this year should be assessing what needs to change to make the Horned Frogs offense a better ecosystem for their QB. Patterson said as much.

Although, 6-foot-5, 230-pound quarterback fresh out of Germany, Alexander Honig, arrives on campus next summer. If he’s the future, does Duggan’s development matter? If not, go ahead with running the ball 40 times a game and to borrow a Pattersonism, “just win by one.” Read More