Run Max Run: Why TCU should stick with their winning formula against West Virginia 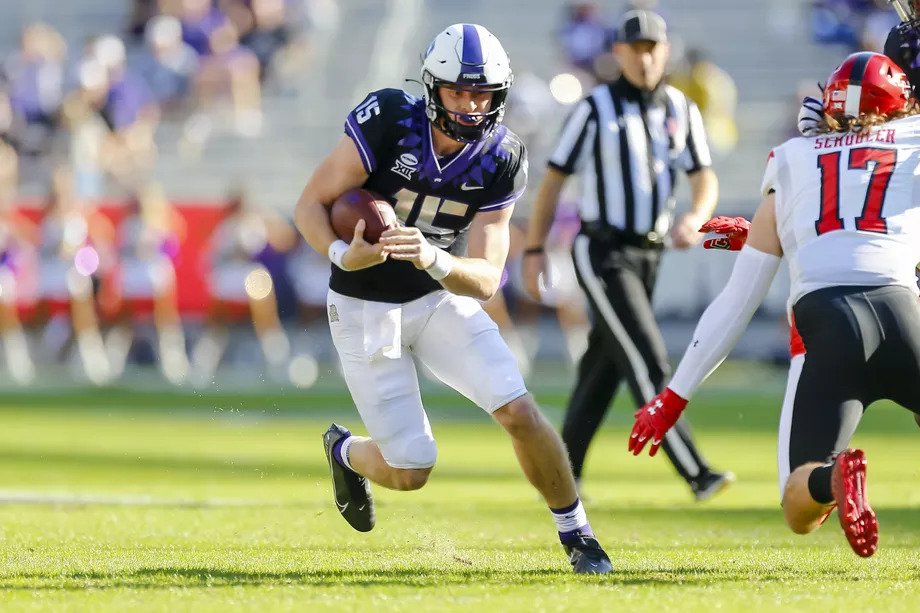 What do top-ranked Alabama, third-ranked Ohio State, fourth-ranked Clemson, and sixth-ranked Florida have in common? They all average over 300 passing yards per game with the Crimson Tide (4th), Tigers (7th), and Gators (5th) all ranking in the top ten in passing yards per game in the entire NCAA. However, that’s not how TCU has won in 2020.

The Horned Frogs are 3-0 this season when they rush for more than 200 yards as a team and 0-3 when they don’t. Their last two wins, on the road against Baylor and at home against Texas Tech, have produced their two biggest rushing yards totals of the season. Yet, TCU Head Coach Gary Patterson rightfully acknowledged Tuesday that his team’s passing offense has room to grow.

The winless Kansas Jayhawks are the only Big 12 team to surrender more sacks, 38, than TCU’s 19 this season. Quarterback Max Duggan is coming off one of his worst passing games of his career, passing for under 100 yards for the first time this season, 73 and throwing his first interception since Game 1 against Iowa State, while completing just 47.8 percent of his passes, his lowest amount of the season.

While Patterson said that TCU’s pass-catchers need to cut down on their drops, the Horned Frogs have only dropped 12 passes in 2020 according to Pro Football Focus, which puts them at 5th place for butterfingers in the Big 12, right in the middle of the conference.

Despite the aerial struggles, Duggan is clearly one of the best talents the purple and white have to offer this year. He ran for a career-high 154 yards and three touchdowns on 19 carries, including the game-sealing, 81-yard score where he out-ran the entire Texas Tech secondary. Duggan became the first Horned Frog with three rushing touchdowns in a game since running back Darius Anderson, who also put TCU on his back in a 44-31 win at No. 6 Oklahoma State in 2017. This season, running backs Darwin Barlow and five-star freshman Zach Evans have been TCU next-best offensive weapons.

West Virginia is the Big 12’s best total defense, allowing 271 yards per game, which makes them the only team in the conference to allow fewer than 300 yards per game. The strength of their defense is their ability to stifle opposing aerial attacks as they allow a Big 12-low 161.6 passing yards per game in addition to hauling in nine interceptions, the most in the Big 12.

This is not the get-right game for the Horned Frogs’ passing game. That would be their next game on November 28th at Kansas, the team that is tied for the fewest interceptions (3) in the Big 12, along with Texas Tech. Come Saturday, Patterson would be best served to channel his inner Leigh Anne Tuohy and “run the dang ball.” Read More