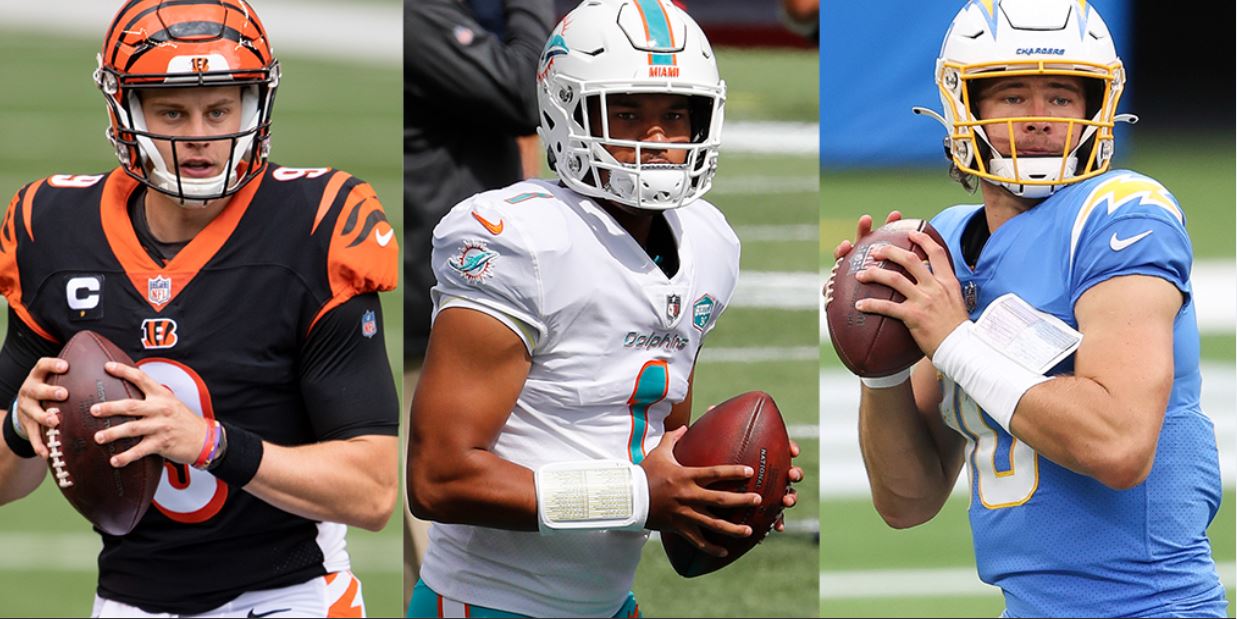 The future is now in Miami, with No. 5 overall pick Tua Tagovailoa set to make his first NFL start when the Dolphins host the Rams on Sunday. Tagovailoa follows in the footsteps of Joe Burrow (the No. 1 overall selection in April) and Justin Herbert (No. 6), making 2020 the fifth season since 1950 to feature three-plus top-10 rookies starting at quarterback.

Who's the best signal-caller in the Class of 2020? That debate could take years (decades?) to resolve. However, a quarterback's success is highly dependent on his teammates. Thus, determining who has the top supporting cast will indicate which quarterback is in the best position to succeed.

That is what NFL Media researcher Garrett Podell aims to accomplish below, ranking the three quarterbacks in terms of their surroundings in four key categories before ultimately ascertaining whose overall setup is most advantageous.

NOTE: Since No. 26 overall pick Jordan Love has not been active and in shoulder pads for a single Packers game this season, the last first-round quarterback from the 2020 NFL Draft is excluded from this analysis.

Chargers running backs have forced 32 missed tackles on runs, tied for seventh-most among NFL backfields with Tennessee. Despite losing Austin Ekeler to a hamstring injury in Week 4, Los Angeles' RB group has averaged -0.03 rushing yards over expected (RYOE, a 2020 addition to Next Gen Stats)per attempt, which is actually the best figure among these three teams.

Myles Gaskin's 522 scrimmage yards account for 24 percent of Miami's scrimmage yards, the ninth-highest percentage among all NFL players. Overall, Dolphins backs have run for -0.2 RYOE per attempt in 2020, second among these teams.

Despite boasting Pro Football Focus' highest team run-blocking grade among these three organizations (and the 13th-highest mark in the league), Cincinnati's running backs have rushed for -0.35 RYOE a pop, the third-worst rate in the NFL.

Miami allowed rushers to pressure former starter Ryan Fitzpatrick on 23.9 percent of passes, per Next Gen Stats, ranking 14th. However, Fitzpatrick's average time to throw of 2.41 seconds is the third-fastest mark in the NFL this season, per PFF. Tagovailoa's 2.71 seconds to throw in college would be tied for 16th in this year's NFL rankings. Among those Tua would be tied with ...

Herbert's time to throw is 2.71, tied for 16th-fastest in the league. The Chargers have allowed a pressure rate of 27.8 percent, 24th in the NFL. Bolts quarterbacks have been sacked 12 times, tied for 13th in the NFL, with Herbert absorbing 10.

Burrow averages the 11th-fastest time to throw in the NFL at 2.65 seconds, but he has been sacked 28 times, tied with Eagles quarterback Carson Wentz for most in the league. The Bengals have allowed a pressure rate of 31.4 percent, the sixth-highest mark in the NFL.

Miami's pass catchers are wide open on 19.9 percent of targets, open on 43.9 -- both figures rank second among these teams. The Dolphins' top three pass catchers by receiving yards -- WR DeVante Parker﻿, TE Mike Gesicki and WR Preston Williams -- are all under contract through at least 2021, providing a nice chemistry-building opportunity.

Burrow came into the league with a reputation for precision, something that's definitely been put to the test in Cincinnati. Of all the targets accumulated by Bengals pass catchers, a whopping 22 percent have come via tight-window throws (1 or fewer yards of separation). That's the second-highest figure in the NFL, trailing only Chicago's 26.3 mark.

Miami ranks third in scoring defense (18.8 points per game) and first in third-down D (31.3 percent conversion rate). With two of the NFL's four highest-paid cornerbacks in Byron Jones and Xavien Howard, the Fins have allowed seven passing touchdowns -- only the Bears (six) have yielded fewer.

Despite losing superstar safety Derwin James in camp to a knee injury, Los Angeles' defense still features two Pro Bowl defensive ends, Joey Bosa and Melvin Ingram﻿. The Chargers are pressuring quarterbacks on 26.5 percent of their pass-coverage snaps (11th-highest in the NFL, per Next Gen Stats).

The Bengals and Jaguars are the only teams in the NFL that rank in the bottom eight in both passing yards and rushing yards allowed per game. Cincinnati's all-time sacks leader, Carlos Dunlap﻿, was just traded to Seattle after voicing his displeasure with the team on social media. This hasn't been the Bengals' year.

For this season and beyond, Tua's supporting cast puts him in the best position to succeed. Having the edge in offensive line play and on defense allows Tagovailoa to play under less pressure in a literal and figurative sense. Through Week 7, 5,329 points have been scored across the NFL this season, the most at this point in league history. Being able to fight back defensively is significant. Boasting the top rankings in running backs and pass catchers, Herbert's cast is second to me, with room to grow given improved health. Burrow joined Cam "Superman" Newton as the only players to eclipse 2,000 passing yards in their first seven games. Cincinnati also needs Burrow to be a superhero. Read More