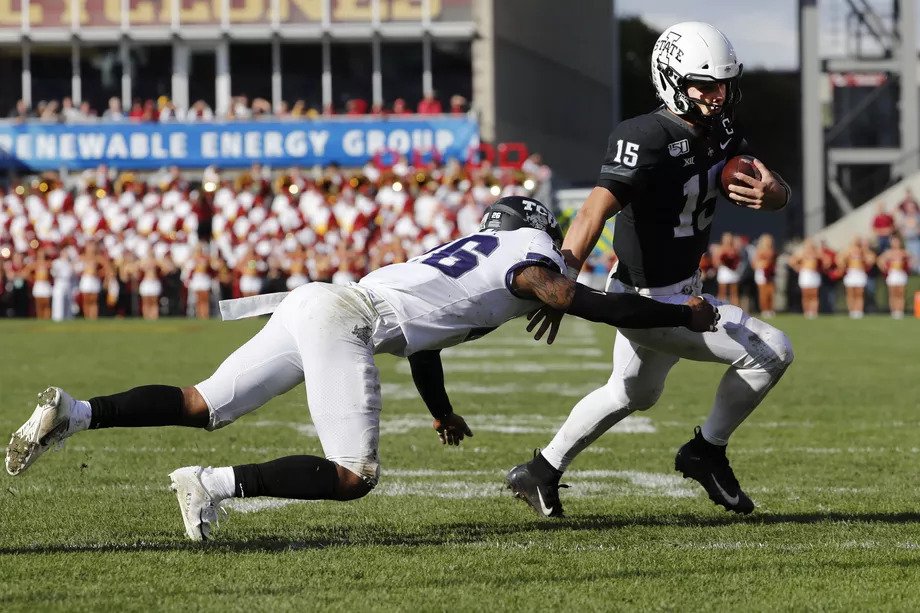 College football is back in Fort Worth. That’s a sentence that will seem surreal until the pigskin is swirling through the September sky toward an end zone in Amon G. Carter Stadium at 12:30 p.m. Central Time. On the line for the Horned Frogs is not only the opportunity to start 1-0, but Saturday also puts their 18-game home opener winning streak, which is tied for the eighth-longest in the nation, on the line.

“They’re a good football team, already played a game, so they’ve had time to fix what they thought they did wrong and get better,” TCU Head Football Coach Gary Patterson said. “ For us, we’re ready to play since we’ve had more practice time. It’s what our kids have worked hard for and so we are ready to go forward.”

Whenever the football is in the possession of the Iowa State Cyclones, Patterson’s defense, the top total defense in the Big 12 in each of the previous three seasons, must do everything in their power to stifle ISU quarterback Brock Purdy.

While that statement seems obvious, it cannot be stressed enough since Purdy passed for more than 240 yards (247) and ran for more than 100 yards (102) in the Cyclones’ 49-24 win a year ago. Clearing those benchmarks against TCU with Patterson dialing up the defensive play calls has only happened one other time. The last time was 17 years ago when Houston Cougars quarterback Kevin Kolb threw for 434 yards while rushing for 144 in a 62-55 loss to the Horned Frogs. Purdy totaled four touchdowns (two passing & two rushing) in 2019 while Kolb recorded five (four passing and one rushing) in 2003.

“We’ll see,” Patterson said when asked about preparing for ISU’s dual-threat dynamo. TCU’s defense, nationally-lauded over the years for its abundance of team speed on that side of the ball, gives their head coach faith that they’ll be able to keep better track of the Iowa State attack in 2020.

“We played them the year before, and our grass is a faster surface, so we’ll see,” Patterson said.

Even with the lower-cut, thin-bladed grass at Amon G. Carter Stadium, it’ll certainly take more than vegetation to keep Purdy in arm’s reach. Only three of his 12 carries a year ago were scrambles off of broken down pass plays according to Pro Football Focus, meaning the Cyclones called his number in the ground game nine times. This was a sound strategy last year with their quarterback averaging 8.5 yards per carry.

If TCU’s defensive line can start the game intact, including defensive tackle Terrell Cooper whose health is in question, there’s faith in the line’s ability to maintain a wall along the line of scrimmage.

“He’s [Cooper] been out, he got banged up a little bit in practice, probably a game-time decision, but a day before that he was playing as well as many of the defensive tackles we’ve had in the last 10 years” Patterson said. “The group has done well. There’s about seven of them.”

That depth touted by Patterson will be critical as ISU ran the ball on nearly 60 percent of their offensive plays against TCU in 2019 according to PFF, so the game will likely be decided in the trenches if the Cyclones run the ball like they did in 2019.

The Big 12’s tackles leader in 2019, TCU linebacker Garret Wallow, returns to anchor the defense. The top-rated safeties against Power 5 teams according to PFF, Ar’Darius Washington and Trevon Moehrig, are back for their third seasons on campus. All three have been named Preseason All-Americans.

“They didn’t hear [that] praise from me,” Patterson said. “The key to that is they’re only going to be NFL-ready if they play like that this year. That’s the way we approach things because I don’t do much with the hype.”

Their teammate didn’t mind pouring on the praise.

“I have all the confidence in the world with those two back there,” TCU wide receiver Taye Barber said. “They make me better every day in practice and just going against two guys like that, you just have no choice but to get better. They are the number one and number two safeties in the nation for a reason.“

The hype is warranted. Moehrig forced 17 contested passes and allowed just two to be caught when in coverage in 2019 according to PFF. With Moehrig covering nearly half of the field in Patterson’s 4-2-5 defensive scheme, Washington thrived not allowing any passing touchdowns and intercepting five passes in his 276 pass coverage snaps during the 2019 season per PFF.

That type of coverage will be required if the Horned Frogs want to leave the stadium smiling as the Cyclones receiving core could also fill out a basketball roster: 6-foot-3, 207-pound wide receiver Xavier Hutchinson appears small when compared to two of his teammates, 6-foot-6, 212-pound wide receiver Sean Shaw Jr. and 6-foot-6, 257-pound tight end Charlie Kolar.

“This league throws the ball well and there are always good skill players, so we have to get ready to tackle,” Patterson said. “We’ll have a challenge with their bigger wide receivers and tight ends in this ballgame.”

Great safety play can also hide inexperience as Patterson is breaking in new, full-time starters at both cornerback positions in Noah Daniels, who missed the entire 2019 season with an injury, and Tre’Vius Hodges-Tomlinson, the nephew of Pro Football Hall of Famer and TCU great LaDainian Tomlinson.

“He’s [Daniels] is a great corner with great speed,” Barber said. “He focuses on his craft, he’s a really good corner, and I can’t wait to see what he does on Saturday. When I do go up against him, it’s a battle every time.”

Pressuring Purdy, whether it’s through the defensive line or a variety of blitz calls, decreases the amount of time required to cover those Cyclone behemoths and successfully getting to Purdy turns him into a different player. When given a time to survey the field, Purdy had the fourth-lowest rate in the country of negatively graded throws (bad throws and throws that were or could have been turnovers) in 2019 according to PFF.

However, TCU sacked Purdy just once, courtesy of defensive end Ochuan Mathis, which was tied for the lowest single-game sack total of the Horned Frogs’ season.

The year 2020 is unlike any other the world has experienced, and with many key pieces back in place from the Big 12’s best total defense, it wouldn’t be defined as insanity for TCU to expect a different result this Saturday.

“We can just forget about last year because it’s a new year and it’s a new team,” Barber said. “Everybody needs to step it up.” Read More