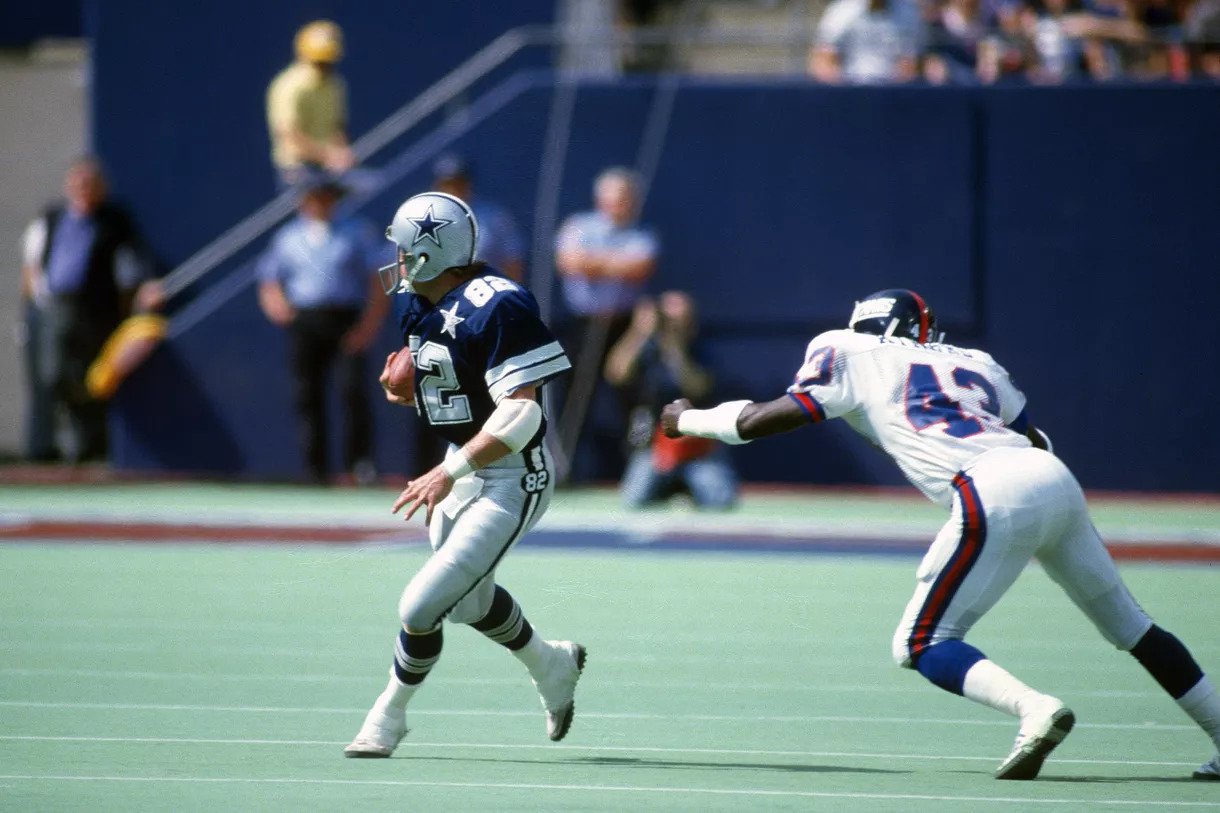 Given that history, it only makes sense to look back at the best NFL players the Horned Frogs have produced to this point at each position. The NFL wide receivers out of TCU to this point have had careers varying from solid to disappointing to what could have been. 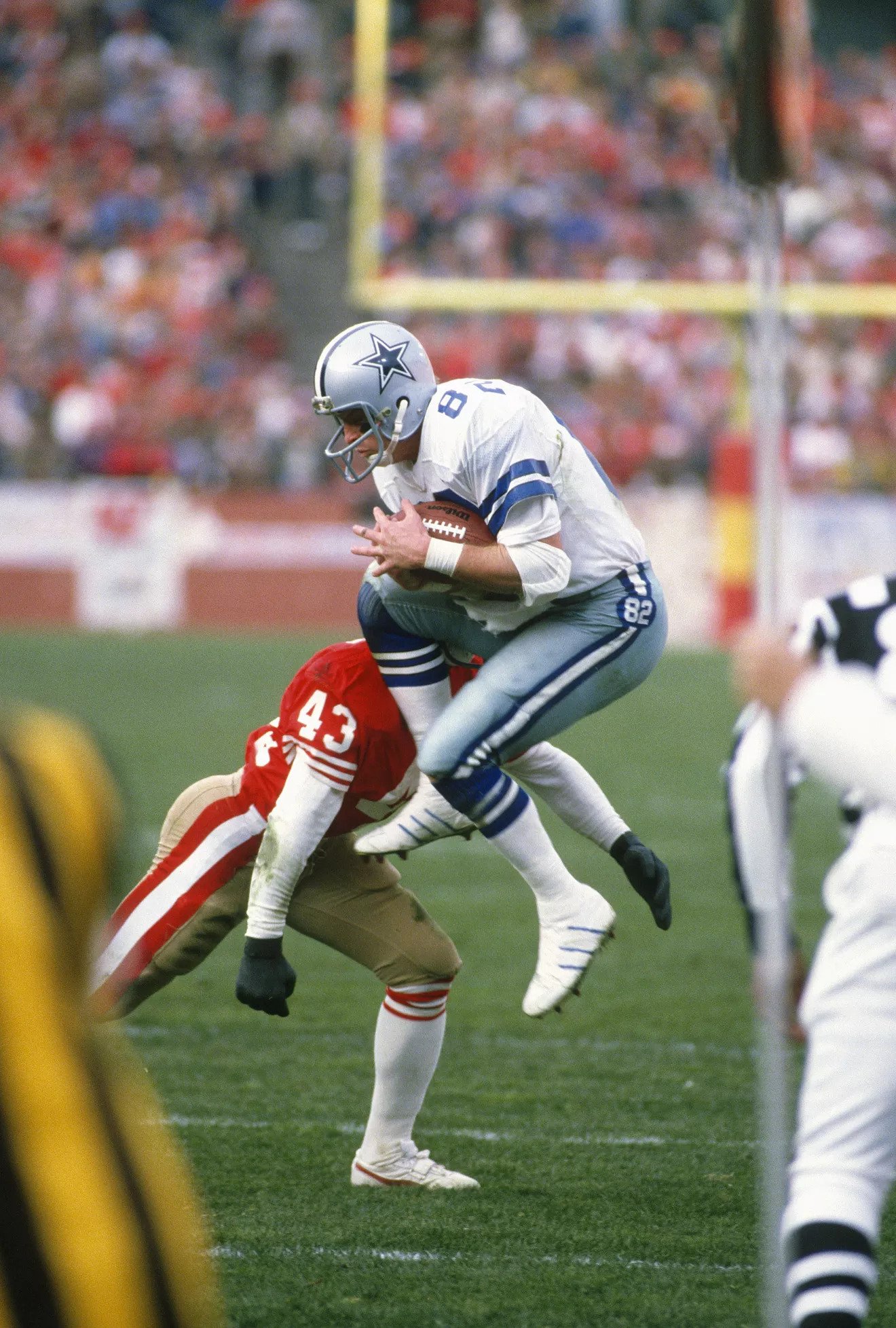 Mike Renfro is about as Texas as it gets. Born in Fort Worth, he never left until the conclusion of his collegiate career at TCU only to move down to Houston before returning to the Dallas-Fort Worth Metroplex in the end. While the Horned Frogs didn’t do much winning from 1974-1977, going 4-40, Renfro shined. He started every game of his four-year career and he topped Southwest Conference leaderboards with regularity. During the 1975 season, no one had more receptions (49) or receiving yards (810) than Renfro, and no one had more touchdown receptions (10) in 1977. Renfro concluded his Horned Frog career as TCU’s all-time receptions leader (162) and receiving yards leader (2,739); however, he was surpassed in both categories by No. 4 on this list — more on that later. Upon his arrival in Houston to play for the Oilers in 1978, Renfro became an immediate starter for a team that earned consecutive AFC Championship Game appearances. However, Renfro and the Oilers couldn’t overcome Chuck Noll’s Pittsburgh Steelers led on the field by quarterback Terry Bradshaw and the Steel Curtain defense. After a loss in the Wild Card round during the 1980 season to Jim Plunkett and the Super Bowl champion Raiders, the Oilers won just 10 of their next 41 games from 1981-1983, making them the second-worst team in the NFL ahead of only the Colts. Just prior to the 1984 season, the Cowboys acquired Renfro, a second-round pick, and a fifth-round pick in return for sending receiver Butch Johnson and a second-round pick back to Houston. The fifth-round pick accompanying Renfro to the Cowboys was used in 1985 to add running back Herschel Walker, which in turn led to the Cowboys to make another deal that enabled them to become an all-time team in the 1990’s. The Cowboys made one playoff appearance during Renfro’s final four seasons (1984-1987), and he was a big reason for their 1985 NFC East Division Championship. He led the Cowboys in touchdown receptions (8) and was second on the team in receiving yards (955) while finishing third in receptions (60). However, the Cowboys were destroyed by the Rams in the Divisional Round of the NFC playoffs, losing 20-0, as running back Eric Dickerson torched the Dallas defense to the tune of 248 rushing yards and two rushing touchdowns. A 10-year career with more than 300 receptions and 4,000 receiving yards makes Renfro the unquestioned best professional receiver TCU has sent to the NFL. 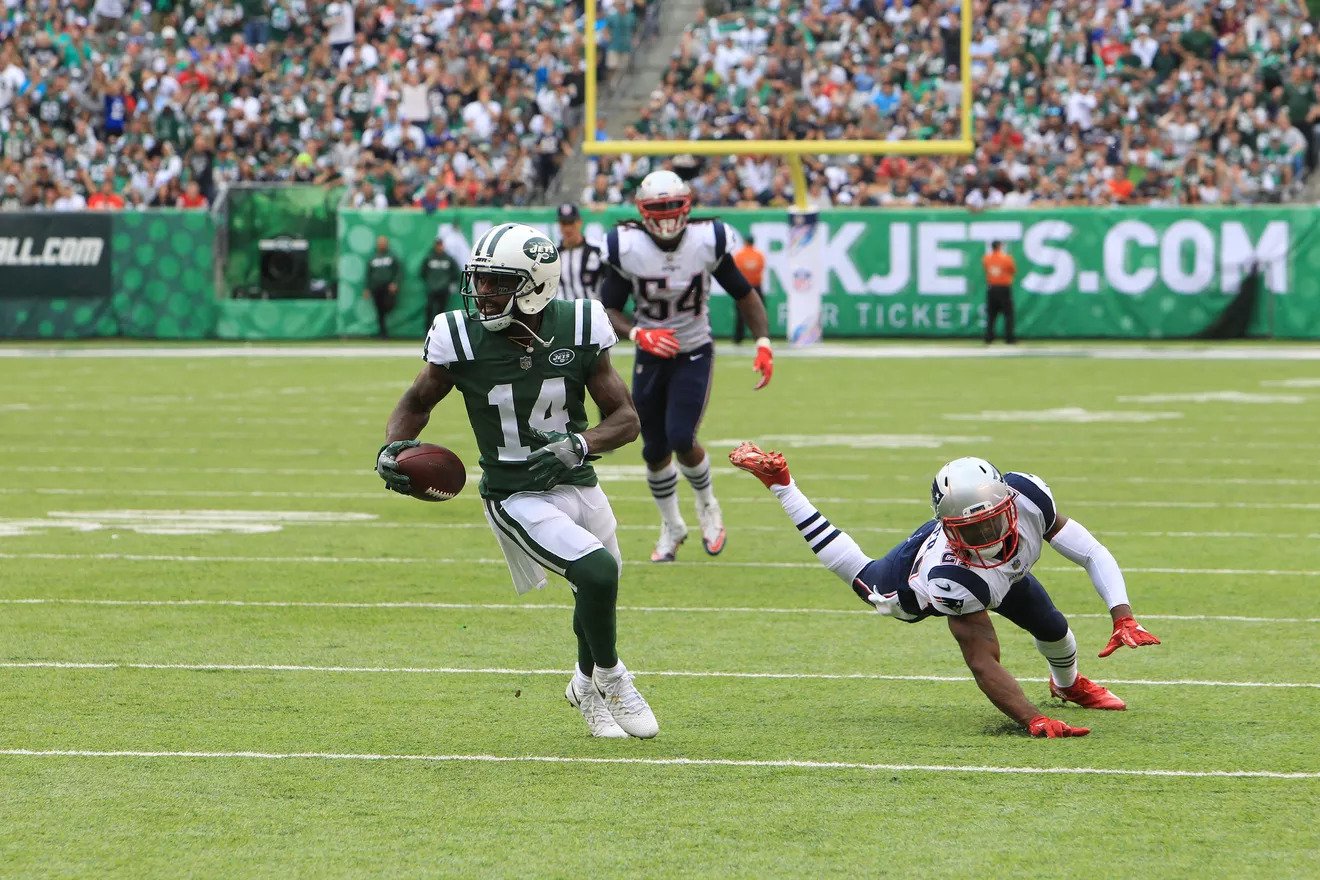 Jeremy Kerley is one of the most important wide receivers in Horned Frog history. The two-time Mountain West Special Teams Player of the Year (2009-2010) was Andy Dalton’s favorite target during their senior year in 2010 as Kerley caught 56 passes for 575 receiving yards and 10 receiving touchdowns en route to a perfect 13-0 season that concluded with Rose Bowl victory against Big Ten Co-Champion Wisconsin. Drafted in the fifth round by a Jets team coming off consecutive AFC Championship Game appearances, Kerley’s NFL career seemed primed for success. However, the Jets failed to reach the playoffs again following their 2010 season and five different quarterbacks started games for the Jets during Kerley’s first five NFL seasons: Mark Sanchez, Geno Smith, Ryan Fitzpatrick, Michael Vick, and Greg McElroy. In 2016, Kerley signed with the 49ers following their hire of Chip Kelly to be their new head coach. Despite the team winning just two of their 16 games, Kerley had his best NFL season catching passes from Colin Kaepernick, putting up career-highs in receptions (64) and touchdown receptions (3). Once Kelly was fired at the conclusion of 2016, Kerley returned to the Jets who again disappointed going 5-11, leading the team to draft quarterback Sam Darnold in the 2018 NFL Draft. Kerley’s final season coincided with rookie quarterback Josh Allen’s first in 2018, which ended in a 6-10 finish. While Kerley was a part of one of the most successful runs in TCU history from 2007-2010, the Andy Dalton era, he never quite found a winning situation in the NFL. 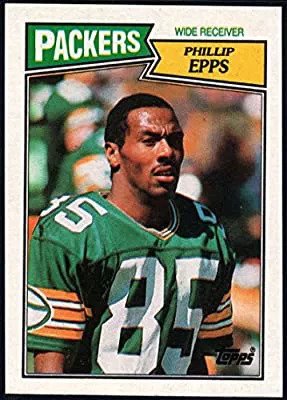 Phillip Epps is a receiver who was on good teams, just a little too early. At TCU, he played for head coach F.A. Dry and won seven football in four seasons from 1978-1981. Three years later, the Horned Frogs powered by Heisman Trophy finalist running back Kenneth Davis would go 8-4 and make a trip to the Bluebonnet Bowl. In the NFL, Epps started on a high note, catching two touchdowns in his rookie season, tied for the 2nd-most on the team, and the Packers won the NFC Central Division with a 5-3-1 record in a strike-shortened season. However, Green Bay would lose a high-scoring Divisional Round playoff game against the Cowboys, 37-26. That would be the only playoff appearance of Epps career. His best statistical seasons were in 1985 and 1986. The 1985 season was the only year of Epps’ career that he started all 16 games, and he totaled a career-high 683 receiving yards. The next season, Epps caught a career-high 49 passes, four of which went for touchdowns. He played two more seasons in the “Frozen Tundra” before spending his final season with the Jets in 1989. If Epps had been drafted in 1992 by the Packers instead of 1982, he would have played his career with Hall of Fame quarterback Brett Favre. Still, a career spanning eight seasons is quite remarkable especially considering that Epps was a 12th-round draft pick. 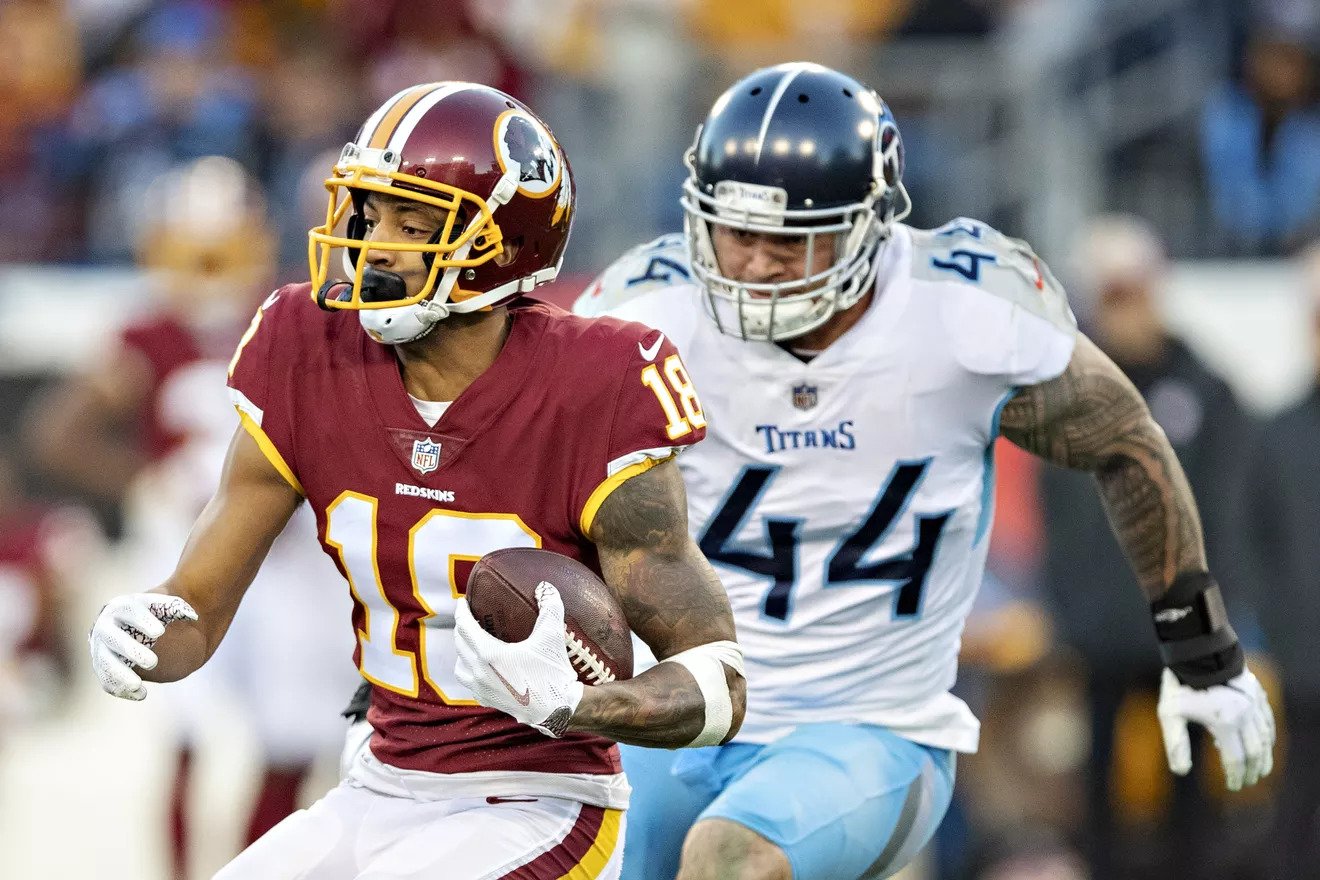 No wide receiver has been more productive at TCU than Josh Doctson: he is the Horned Frogs’ all-time leader in receiving yards (2,784) and receiving touchdowns (29) while sitting at No. 2 on the all-time receptions list, just two catches behind Kelly Blackwell (181) for the TCU all-time receiving statistics Triple Crown. Unfortunately for Doctson, these rankings reflect the quality of his NFL career. He was drafted with high hopes, selected 22nd overall by the Washington Football Team in 2016. That selection made Doctson the first Horned Frogs wideout chosen in the 1st round. Jalen Reagor, this year’s 21st overall selection by the Eagles, squeaked past Doctson to become the highest-drafted receiver in Horned Frog history. Doctson’s rookie year in 2016 came to a screeching halt after Week 2 following just two catches for 57 receiving yards after an Achilles injury landed him on injured reserve. Year 2 brought a glimmer of hope as Doctson’s six touchdown receptions were the most on the Washington Football Team, but his receptions (35) and receiving yards (502) were well short of where a first-round wide receiver should be at that stage. Doctson’s third season led to incremental gain in receptions (44) and receiving yards (532) while his touchdown receptions reverted backwards to just two in 2018. This led the Washington Football Team to decline his fifth-year contract option for the 2020 season and eventually release their former first-round pick during the 2019 preseason. Doctson reunited with his old quarterback, Kirk Cousins, in Minnesota, but he played just one game, seven offensive snaps and no targets, before landing on injured reserve again, this time with a hamstring injury. Now, Doctson hopes his career will take off with Sam Darnold and the Jets in 2020, but if he can’t breakout in a starved offense that possessed the fourth-worst aerial attack of 2019, his dreams of an NFL career will likely be grounded for good.

Jason Tucker’s NFL career is a big what-if as injuries curtailed his professional prospects early and often. After leading TCU in receiving yards (692) and receiving touchdowns (4) during his junior season in 1996, Tucker flashed enough potential to get drafted despite being suspended and missing his entire senior season in 1997. Tucker played just one preseason game for the Bengals after being drafted in the sixth round as a pulled hamstring derailed his attempt to make the final roster in 1998. He returned home to the Dallas-Fort Worth metroplex and shined when he was given the chance. In the next to last game of the season, Tucker broke out in a 31-24 loss against the Saints with seven receptions, 128 receiving yards, and a touchdown reception. The final week of the season, dominated again, catching four passes for 122 receiving yards and one touchdown, a 90-yard catch-and-run. Tucker’s performance in that last game helped nudge the Cowboys into the playoffs with a 26-18 win against the Giants. However, the Cowboys were unable to contain Randy Moss and Cris Carter as their season ended in Minneapolis with a 27-10 Wild Card Round loss. Offseason toe surgery and a groin injury early during the 2000 season caused him to lose a bit of his burst, which led to his release during the 2001 preseason.