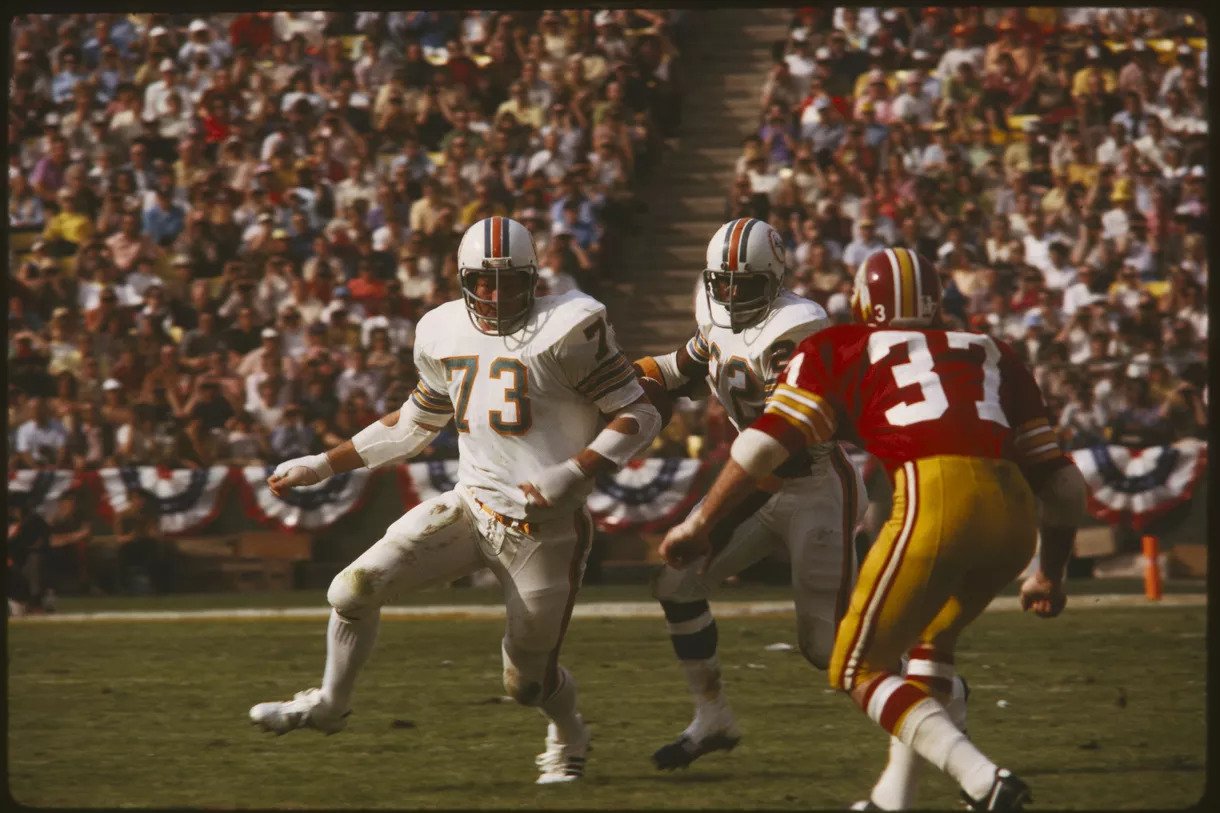 Given that history, it only makes sense to look back at the best NFL players the Horned Frogs have produced to this point at each position. All five of these offensive tackles contributed to some of the top offenses of their eras. 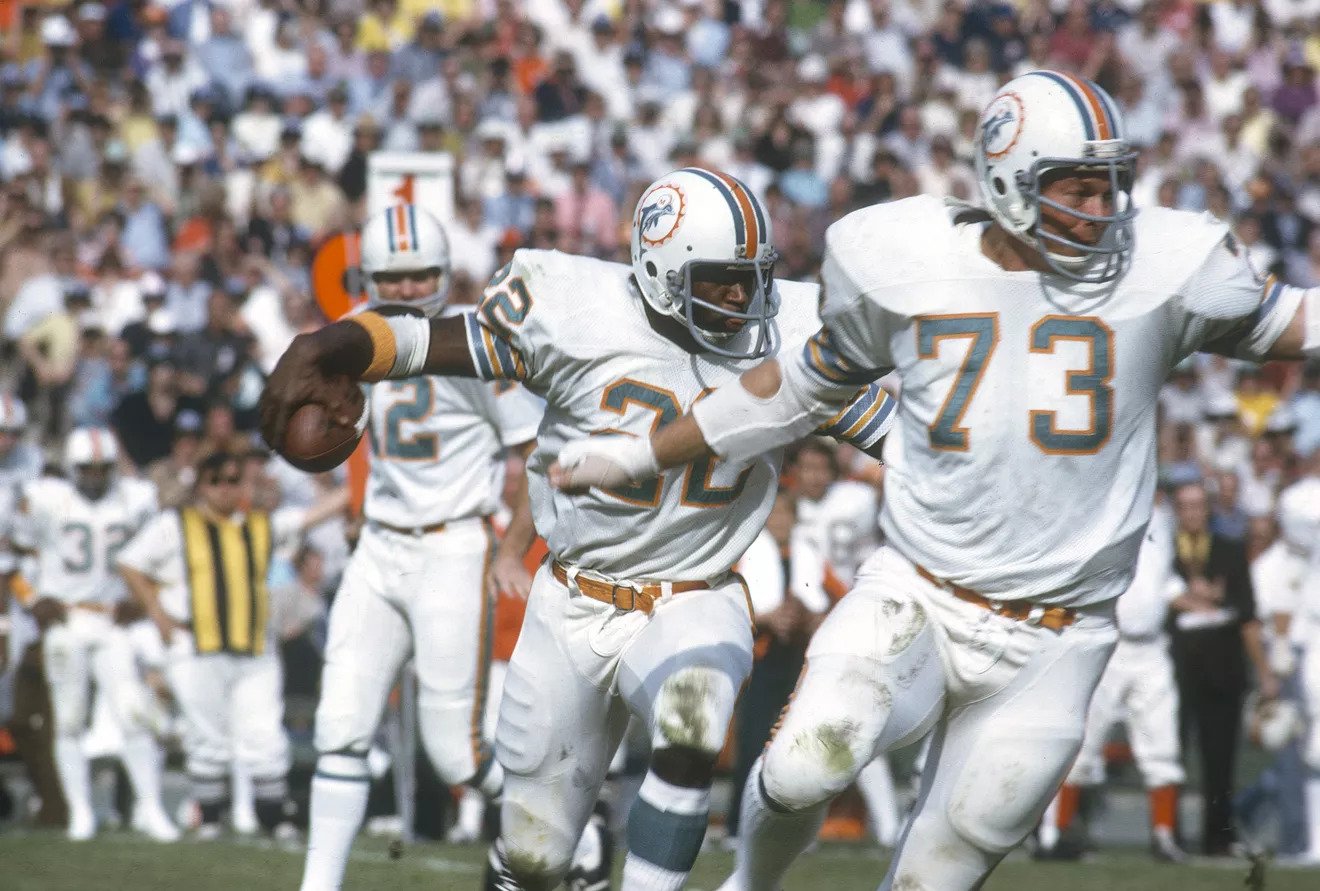 TCU’s best NFL offensive tackle was one of the Horned Frogs’ least-heralded players entering his rookie season. It’s safe to say most 14th-round draft picks don’t last, especially not 14 seasons like Evans. Despite starting all 14 games at right tackle for the Houston Oilers as a rookie, Evans was one of the few unprotected players ahead of the AFL’s expansion draft in January of 1966.

Thus, Evans became one of the 32 players plucked off the existing eight AFL teams. He maintained a starting role in South Beach, but the wins were few and far between in the 1960’s as the Dolphins went 15-39-2 from 1966-1969, prompting a change at head coach. That shift from George Wilson to the NFL’s winningest head coach, Don Shula, led to Evans’ and the Dolphins’ golden years. Shula re-focused Miami’s offense toward the ground game, which led to the Dolphins maintaining a top-five rushing offense every year from 1970-1975, leading the NFL in rushing yards during the 1971 and 1972 seasons, with Evans opening holes for running back Mercury Morris and Hall of Famer fullback Larry Csonka. Evans and the Dolphins played in three straight Super Bowls during the 1971, 1972, and 1973 seasons.

Losing their first Super Bowl to the Cowboys in the 1971 season fueled the Dolphins to the only perfect season in NFL history capped with a Super Bowl VII win over the Redskins as Evans earned his first Pro Bowl selection. A repeat in 1973 with a Super Bowl VIII victory against the Vikings put Evans and his teammates into NFL history as one of seven teams to repeat as Super Bowl champions. Just as his time in Miami began, it ended with an expansion draft prior to the 1976 season when the Tampa Bay Buccaneers and Seattle Seahawks joined the NFL. Evans was picked up by the Seahawks where he concluded his career after three seasons in the Pacific Northwest. Fourteen professional seasons for a 14th-round pick make Evans a model of sustained success and TCU’s top NFL offensive tackle. 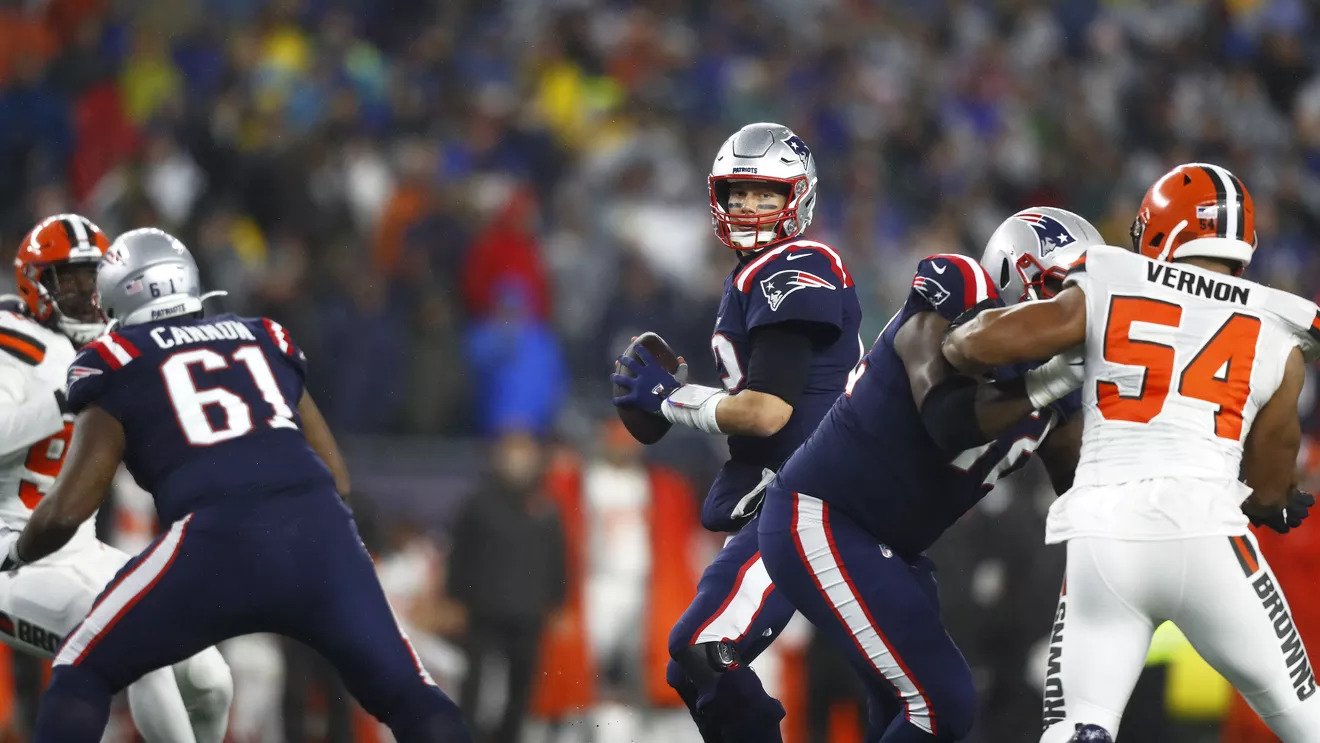 All right tackle Marcus Cannon has known in his career, whether that be collegiate or professional, is consistency at the quarterback and head coach positions, contributing to a solid football career. At TCU, Cannon could stroll into Amon G. Carter Stadium knowing that Andy Dalton would be taking the snaps under center and Gary Patterson would be screaming out instructions from the sideline. In the NFL, all Cannon has known is 11 to 13 wins a year and an AFC East Division title under the stewardship of quarterback Tom Brady and head coach Bill Belichick, two men whose football journeys will end at the Pro Football of Fame.

Cannon only played in seven games his rookie year, missing the first 10 weeks of the season, due to a battle with non-Hodgkin’s lymphoma that he ultimately won the biggest test of his life, foreshadowing the Super Bowl victories to come. The Patriots appeared in the first Super Bowl of Cannon’s career that same season, but they fell short to Eli Manning’s Giants once again. That would be the only Super Bowl of Cannon’s career in which he did not see a snap. However, Cannon has since been the Patriots’ most valuable lineman in Super Bowls as Pro Football Focus gave him the highest grade, 85.2 overall on a scale of 100, over the course of the Patriots’ next four Super Bowl appearances which ended in three wins and one loss to Nick Foles’ Eagles. Strong postseason performance and a career that is entering its second decade makes Cannon an easy choice as the second-best NFL offensive tackle to represent the Horned Frogs. 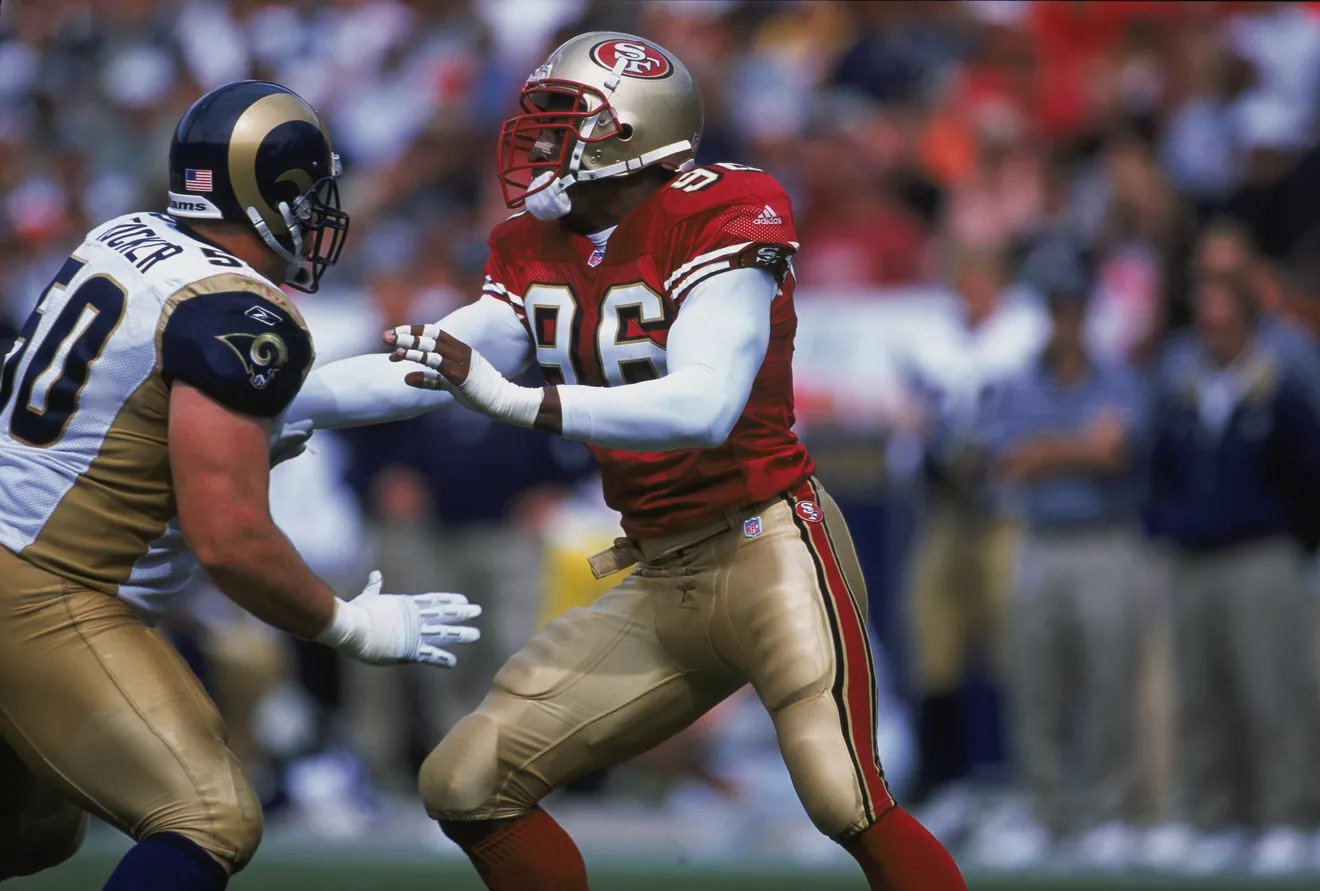 Ryan Tucker’s TCU career, along with Norm Evans’, is the rare one that doesn’t possess any overlap with TCU head coach Gary Patterson’s. Patterson joined the Horned Frog coaching staff as the defensive coordinator in 1998, and Tucker was already entering his second season with the St. Louis Rams. Tucker’s third NFL season, 1999, is when he started to gain traction. He played in every game for the first time in his career as his quarterback Kurt Warner led the NFL in passing touchdowns (41) and won NFL MVP. That season the “Greatest Show on Turf” was born, and the Rams won their first Super Bowl title with a 23-16 over the Titans in Super Bowl XXXIV. Running back Marshall Faulk led the NFL in rushing touchdowns with 18 and won NFL MVP to begin the 21st century, with Tucker paving the way and starting every game for the first time in his career.

The next year, Warner led the NFL in passing yards (4,830) and passing touchdowns (36) earning another NFL MVP award as he led the Rams back to the Super Bowl. Tucker and the Rams came up just short of their second championship in three seasons as New England kicker Adam Vinatieri nailed a 48-yard field goal as time expired to kickstart the Tom Brady-Bill Belichick Patriots dynasty.

The following season, Tucker signed with the Browns, and he brought immediate results as Cleveland made the playoffs in 2002 for the first time since 1994. After losing a shootout in the opening round against the Steelers, the Browns didn’t make the playoffs in any of Tucker’s last six seasons in the league. Twelve NFL seasons played and seven of them as the primary starter in addition to a Super Bowl ring is one of the stronger football lives TCU has produced. 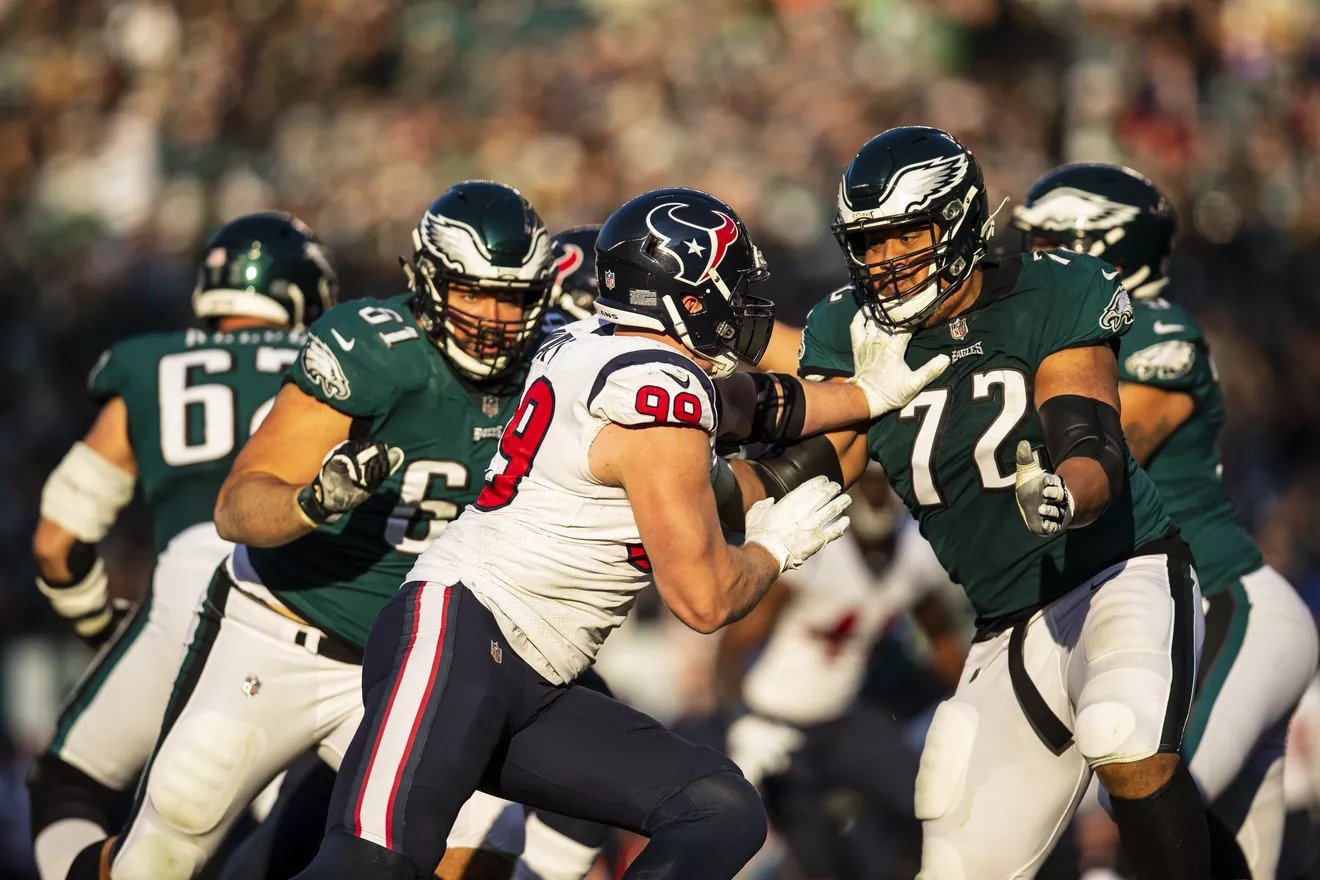 Halapoulivaati Vaitai helped anchor some of the better offensive lines in Horned Frog history, earning consecutive second-team All-Big 12 honors during his final two seasons in Fort Worth in 2014 and 2015. The 2014 season was the high-water mark with TCU ranking second in the country in scoring, averaging 46.5 points per game while finishing ranked third in the final Associated Press poll of the season.

In the NFL, Vaitai learned in the shadow of a legend when he arrived in Philadelphia: left tackle Jason Peters. Peters, a 16-year veteran and nine-time Pro Bowl selection, had the left tackle spot locked down as he has the second-highest graded tackle, 93.6 PFF grade, in the NFL from 2010 to 2019. Opposite Peters was Lane Johnson at right tackle, a three-time Pro Bowl selection who is currently the highest-paid right tackle in the entire NFL.

However, a Peters knee injury in 2017 opened the door for Vaitai to start 10 regular season games and every postseason game during the Eagles’ Super Bowl LII championship run. After seeing time in every game since the start of the 2017 season, the Lions took a chance on Vaitai this offseason and showered him with a 5-year, $45 million contract to hold down the right side of their offensive line and keep quarterback Matthew Stafford upright. That contract makes him the fifth-highest paid right tackle in the NFL by total contract value. The 2020 season will be the first of Vaitai’s career as a Week 1 starter, meaning he has plenty of time to climb up the rest of this list. 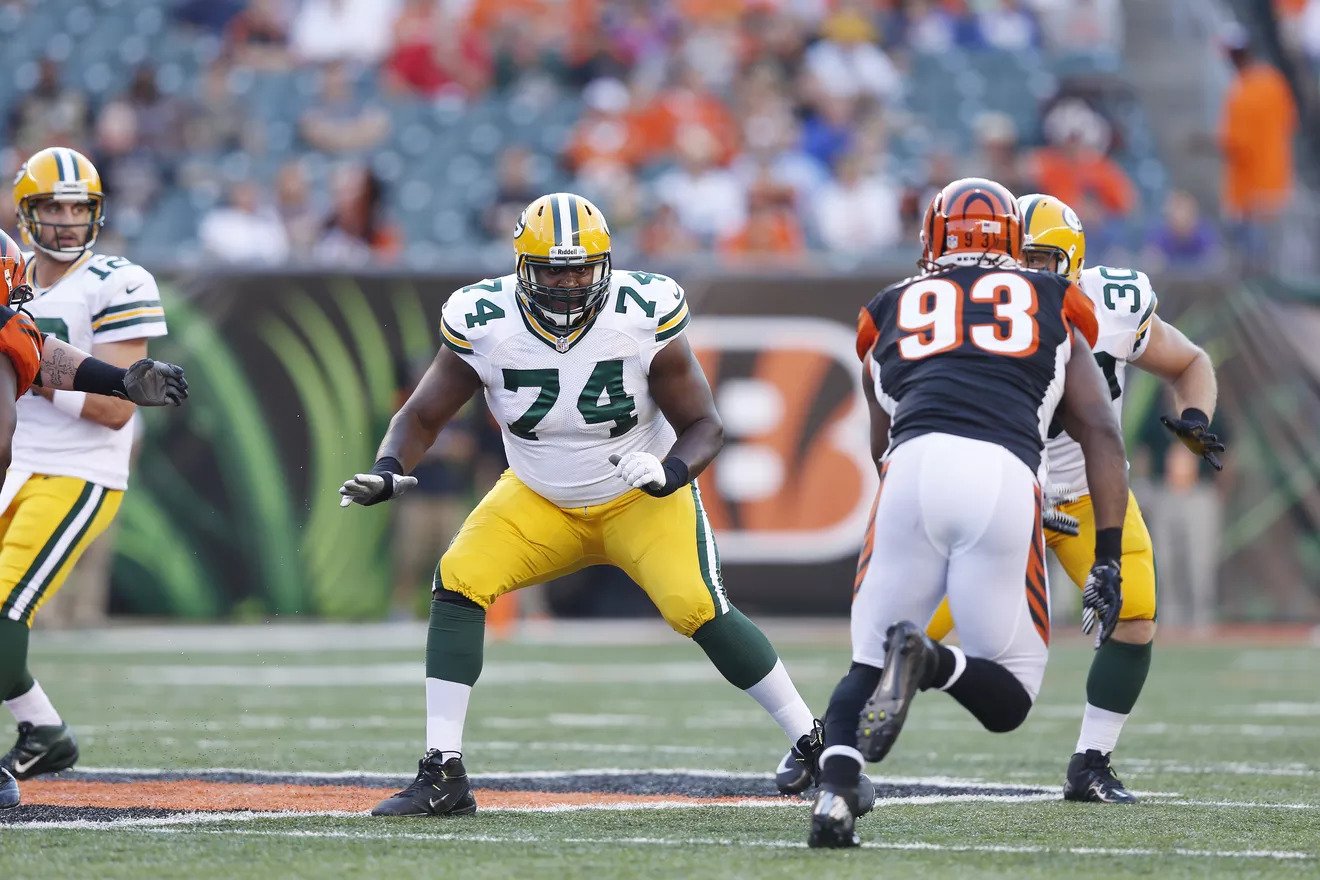 Marshall Newhouse is a classic Gary Patterson football player. Despite being a two-star recruit in high school, Newhouse ended up being the only true freshman to play on offense his first season at TCU in 2006. He concluded his Horned Frog career on an upward trajectory, earning first-team All-Mountain West honors as the Horned Frogs went a perfect 12-0 in the regular season before falling by a touchdown in the Fiesta Bowl against Boise State. Newhouse parlayed that final season into an NFL Combine invite, which led to him being drafted by the Packers in the fifth round.

His rookie season was a mixed bag that ended with him on injured reserve with a back injury and a Super Bowl ring following the Packers’ 31-25 victory against the Steelers in Super Bowl XLV. In 2011, Newhouse played in all 16 games and started 13 as his quarterback Aaron Rodgers put together one of the best single seasons in NFL history. Rodgers threw 45 touchdown passes and only six interceptions, joining Tom Brady (2007) with just the second season in league history with 45 or more touchdowns and fewer than 10 interceptions. Rodgers also finished with a passer rating of 122.5, the highest single-season rating in NFL history, after passing for 4,643 yards in 15 games started. Sitting out the 2011 regular season finale, Rodgers became just the third quarterback to pass for more than 4,640 yards in 15 games or fewer joining Drew Brees (2015) and Hall of Famer Warren Moon (1990). However, Newhouse and the Packers never got it going again in the playoffs after a 15-1 regular season and lost in the Divisional Round against the eventual Super Bowl Champion New York Giants.

Newhouse played two more seasons in Green Bay before reuniting with his college quarterback Andy Dalton on the Bengals in 2014. After a first-round playoff exit, Newhouse spent the next two seasons blocking for Eli Manning on the Giants. A resurgence followed in 2017 starting all 14 games he played, just his third career season to do so in addition to his 2012 season with the Packers and 2015 season with the Giants. Newhouse has since become a journeyman in his 2018 and 2019 seasons. He bounced between the Bills and Panthers for 14 games in 2018, starting two, and he latched on with the Patriots in 2019 only after their projected starter at left tackle Isaiah Wynn suffered a season-ending turf toe injury a few weeks into the season. A decade is a long career in the NFL, and Newhouse is trying to make it last into the 2020’s. However, he is still out in the open market and will likely have to wait for another early-season injury to find a home. Ten years in the NFL isn’t too bad for a two-star high school recruit.