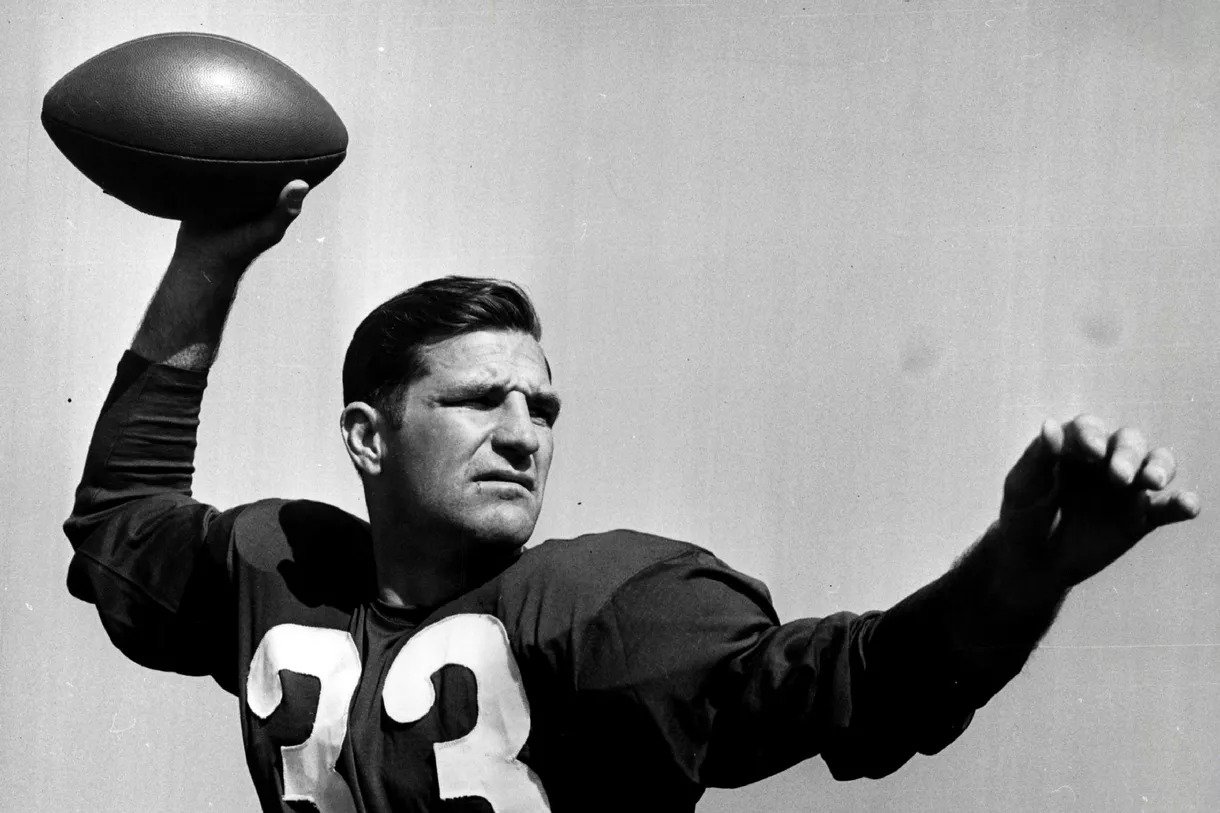 Given that history, it only makes sense to look back at the best NFL players the Horned Frogs have produced to this point at each position. All three of these quarterbacks either won a national championship or a Rose Bowl in college, but these ranks reflect the value of their time at the highest level football has to offer. 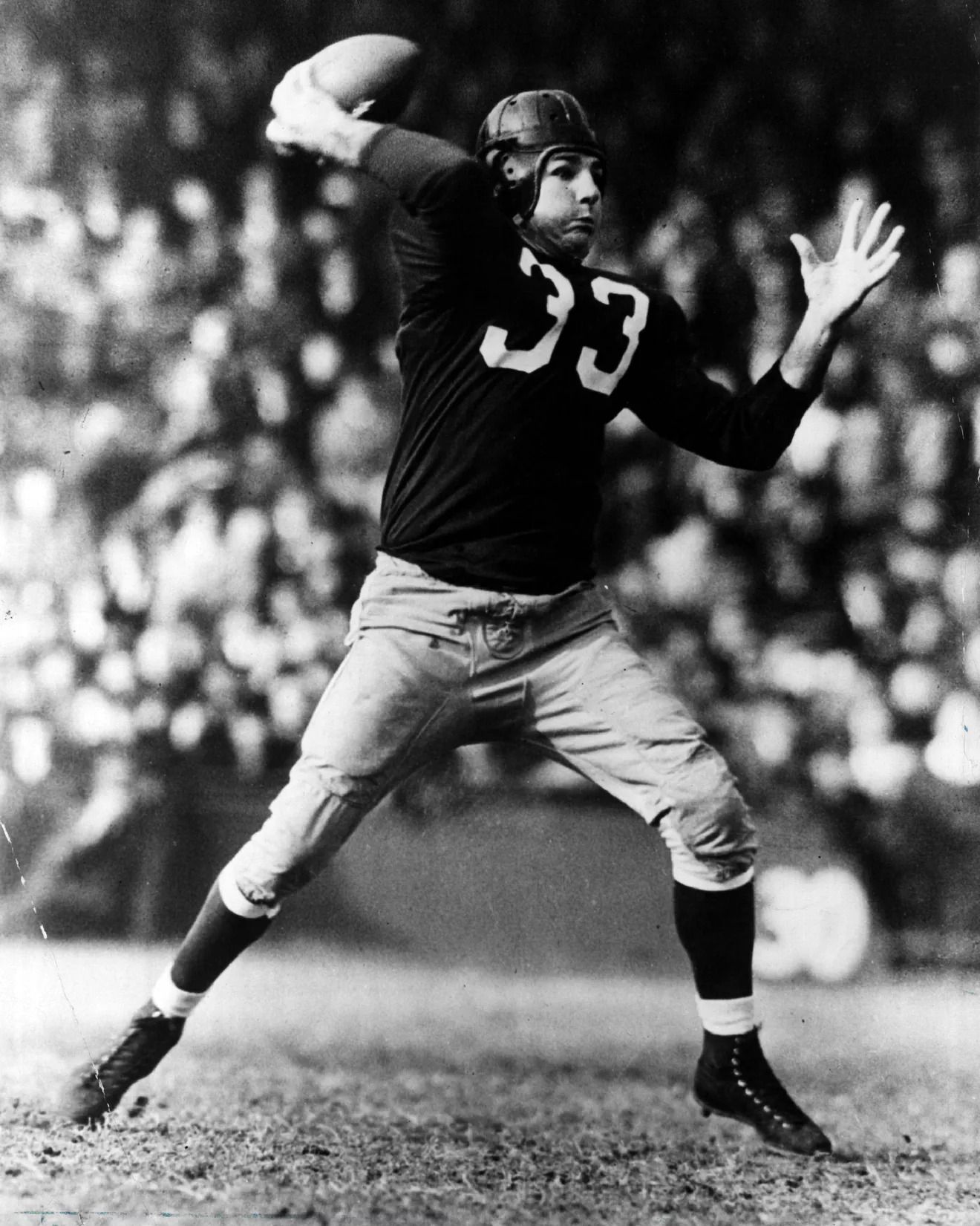 Only one TCU offensive player earned the prestigious honor of being named to the NFL’s 100th Anniversary All-Time Team. It wasn’t LaDainian Tomlinson. Quarterback Sammy Baugh did it all in the NFL as no passer was more prolific than Slingin’ Sammy in the league’s first three decades.

After leading the Horned Frogs to their first national championship following a Sugar Bowl win over LSU to end the 1935 season and a Cotton Bowl win against Marquette to end the 1936 season, the Washington Redskins selected the two-time All-American sixth overall in the 1937 NFL Draft. Baugh’s top ten selection was the first for a Horned Frog quarterback since the NFL began holding a draft in 1936. The only other TCU signal-caller selected in the top ten of the draft is a little further down on this list.

Baugh was an immediate success as a rookie in the nation’s capital, leading the league in passing yards en route to winning the Redskins first NFL Championship. He continued to live up to the “Slingin’” nickname earned during his time in Fort Worth as Baugh would lead the NFL in passing yards three more times during his career (1940, 1947, and 1948), passing touchdowns twice (1940 and 1947), and completion percentage eight times (1940, 1942, 1943,1945, 1946, 1947, 1948, and 1949). Baugh was also more than a passer, playing defensive back, and punter in his career. No season highlighted his ubiquitous on-field presence more than 1943. While Baugh won the second and final NFL Championship of his career the season prior in 1942, Baugh’s 1943 campaign in which the Redskins to the NFL Championship game before losing to the Chicago Bears was his most dominant in all three phases of football.

Baugh played defensive back and punter in addition to running the Redskins’ offense, and Washington needed everything he had to earn an opportunity to defend their title. After going 10-1 in 1942, the Redskins went 6-3-1 in 1943 with Baugh dragging the team back to the championship game by leading the NFL in completions (133), completion percentage (55.6), interceptions on defense (11), punt yards (2,295), and yards per punt (45.9). Baugh’s 23 passing touchdowns were the 2nd-most in the NFL that season and the third-most ever in a single season at the time, in an era when NFL seasons were played in 12 games or fewer. In addition to those marks, Baugh intercepted four passes against the Detroit Lions, a single-game record that still stands today! Baugh’s 1943 season has company with Tom Brady’s 2007 season, Peyton Manning’s 2013 season, and Matt Ryan’s 2016 season in that their best campaigns ended one win short of the ultimate prize. However, Baugh is far and away the most-prized NFL quarterback TCU has produced. 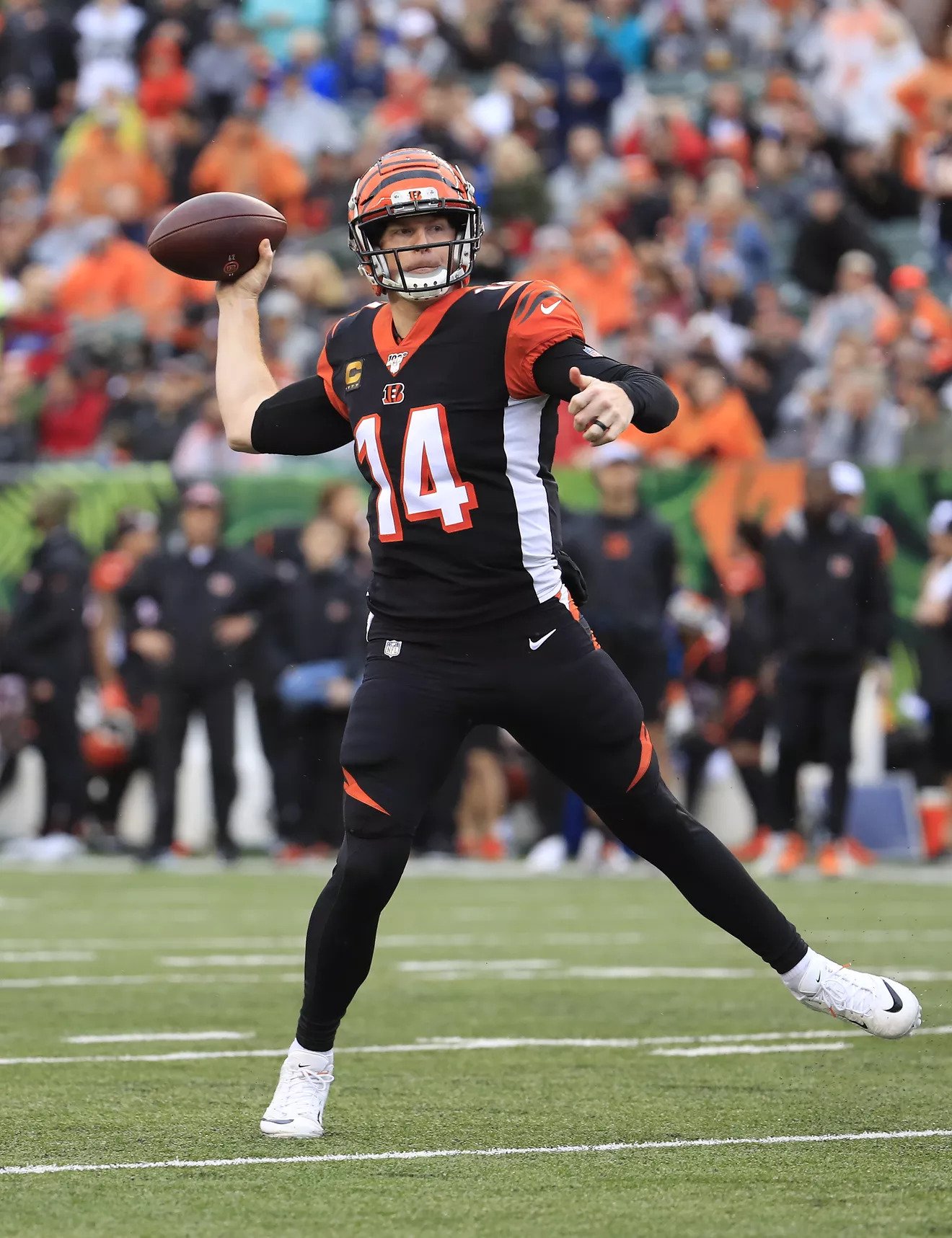 Andy Dalton’s collegiate and professional careers are the inverse of each other with either a lot of wins either following or preceding a dry spell. Dalton went 8-5 his first season as the starting quarterback at TCU. In his final three seasons, Dalton went 36-3, capping his career with the 2011 Rose Bowl victory over Wisconsin to complete a 13-0 season that contributed to the Horned Frogs’ inclusion in the realigned Big 12 starting in 2012.

In the NFL, Dalton’s prosperity began immediately. The Bengals went 52-27-1 in his first five seasons, making them the team with the fifth-most wins in the NFL during that span. The only teams that won more games during those five seasons are Tom Brady’s Patriots, Peyton Manning’s Broncos, Aaron Rodgers’ Packers, and Russell Wilson’s Seahawks.

During that run, Dalton became just the fourth quarterback in NFL history to lead his team (minimum 8 games started in a season) to the playoffs in each of his first five seasons. The other three are Bernie Kosar, Joe Flacco, and Russell Wilson. However, Dalton unfortunately created his own club within that group, being the only quarterback of the four to not win a playoff game during his first five seasons, going 0-5 with losses against the Texans, Chargers, Colts, and Steelers. The loss to the Steelers in the 2015 season occurred with him on the sideline, which we’ll get to shortly. The other three combined to go 20-13 in the playoffs during their first five seasons.

From 2011-2015, Dalton’s Bengals won two AFC North Division titles after the Steelers and Ravens, who combined to win seven of nine division titles after divisional realignment in 2002, tossed the AFC North crown back and forth with the Bengals being the monkey in the middle and the Browns being the lonely kid crying in the corner from 2002 to 2010.

Dalton earned three Pro Bowl selections in his first five years with his best season being cut short in 2015.He set career-highs in passing yards per attempt (8.4), completion percentage (66.1), touchdown to interception ratio (25-7), and passer rating (106.3) in 2015. He even worked his way into the MVP conversation until Week 14 against the Steelers. Trailing 7-0 with about five minutes to go against the Steelers facing second-and-goal from the four, Dalton threw an interception to defensive tackle Stephon Tuitt, he then dove and made the tackle three yards into Tuitt’s return. He then walked to the locker room as his season ended with a fractured thumb.

After that, Dalton never saw his team win more than 10 games again after the Bengals won at least 10 games a year every season from 2012-2015. The Bengals 21-42-1 record since 2016 is the third-worst in the NFL in front of only the Jets and the Browns. This past season, the Bengals went 2-14 and Dalton was benched for three games as rookie Ryan Finley got a disastrous test run going 0-3. The Red Rifle earned the opportunity to close out the Bengals 2019 season with a win against the Cleveland Browns before being released to make way for top draft choice Joe Burrow. Dalton leaves Cincinnati as the franchise’s all-time leader in touchdown passes.

Dalton has had an above-average career when diagnosing his overall body of work. His 31,594 passing yards are the sixth-most among quarterbacks in their first nine career seasons. Only Matt Ryan (37,701), Peyton Manning (37,586), Dan Marino (35,386), Matthew Stafford (34,749) & Joe Flacco (32,639) have thrown for more in the timespan of Dalton’s career. He simply fell victim to a decreasing level of talent in each of his final four seasons with the Bengals. Even in his Bengals swansong in 2019, Dalton actually threw for a career-high 268.8 pass yards per game, the ninth-highest mark in the NFL. Should he get a chance to play in 2020 as Dak Prescott continues to be at an impasse with the Cowboys on a contract extension, don’t be surprised if Dalton wins games guiding the treasure trove of weapons at his disposal in Dallas. 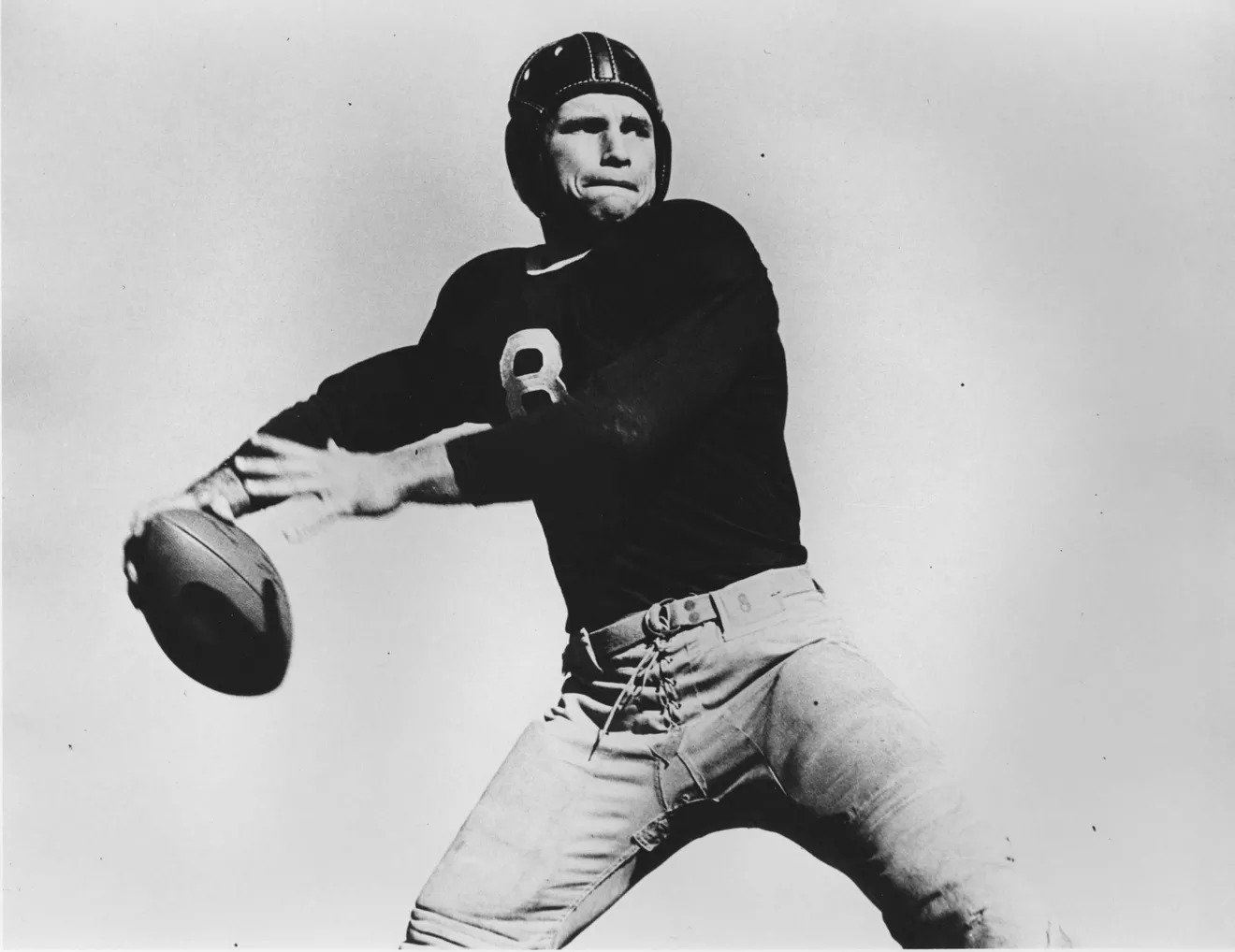 Davey O’Brien’s professional football career is a big ol’ what-if. At TCU, O’Brien was anything but. Even though the Horned Frogs went 4-4-2 in his first season as a starter, O’Brien still earned First-Team All-Southwest Conference honors. 1938 was the season that led to his statue being built alongside his head coach Dutch Meyer and current TCU head coach Gary Patterson. O’Brien passed for 1,457 passing yards, a then-Southwest Conference record, leading TCU to the first undefeated season in program history and its second national championship. His efforts earned him the only Heisman Trophy in program history, and he became the first player in college football history to win the Heisman, Maxwell, and Walter Camp trophies in the same season.

After being selected fourth overall by the Eagles in the 1939 NFL Draft, O’Brien showed promise as a rookie, leading the NFL in passing yards with 1,324. Following his Pro Bowl season, he led the NFL in completions in 1940, but that was the last season the world would see O’Brien on the gridiron. A career in law enforcement with the Federal Bureau of Investigation called O’Brien’s name, thus ending his promising NFL career. While he accomplished a lot in just two seasons, his body of work wasn’t enough to surpass Andy Dalton like he did with his college career. Read More