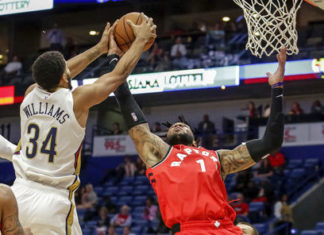 “He’s a tremendous player, a guy who can create for himself and shoot the ball, and he’s a solid defender and rebounds well, especially on the offensive glass,” said Kurt Thomas, the last Horned Frog to play in the NBA. “Solid on both ends on the floor.”

His main advice for the Williams was simple: don’t stop working.

“You have to be in that playbook, doing your homework to learn the system on both sides, and [Williams] has to learn to be a professional, being on the road,” Thomas said. “He’s going to have to create a routine.”

Thomas credited his longevity with continually finding time to improve his skill set.

“I was a gym rat. I always grew up in the gym, and for me it was all about playing the game, shooting the ball,” said Thomas. “Watching my teammates, watching my opponent. I just wanted to compete and to see if you’re better than the next man.”

Williams started his NBA career in the Summer League with the Denver Nuggets and went on to average 2.4 points, 3.4 rebounds and 0.4 assists per game in five preseason games with New Orleans.

He’s seen regular-season game-action already, totaling 16 minutes played in the Pelicans first five games. Three of those minutes include a five-point performance on a perfect two-of-two shooting in a Thursday loss to the Portland Trail Blazers.

As for who the next NBA Horned Frog is going to be, Thomas said he’s watching senior point guard Alex Robinson and junior guard Desmond Bane.

Robinson, who received a Preseason Big 12 Honorable Mention, averaged 6.1 assists per game last season, the fourth-highest mark in the conference.

Bane, who’s returning as TCU’s leading scorer with 12.5 points per game last season, led the Big 12 in three-point shooting, connecting on 46.1 percent of his long-distance attempts.

“I’m looking to see how [Bane’s] improving last year to this year and also as leader this season,” Thomas said.

No. 20 TCU tips off its season at 8 p.m. on Nov. 7 against California-State Bakersfield in Schollmaier Arena.