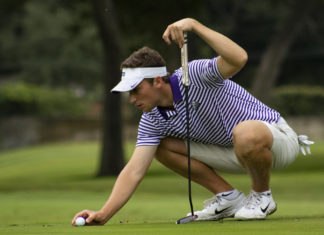 “I’m really happy playing here at Colonial my senior year, it’s something I’ll never forget,” said Mazzoli. “I wasn’t coming in confident, so I’m happy for finishing well for that reason too with a good round today.”

His Tuesday didn’t have an ideal start, culminating with a double-bogey on his eighth hole of the day. However, he turned it around on his second nine, sinking birdies on the first two holes.

“It was a nice comeback after the bad double bogey on 17 today,” he said of the back to back birdies.

Once Mazzoli got rolling on his last nine, he played boegy-free golf.

“I was just trying to play like yesterday, pretty solid from the tee hitting the fairway and giving myself a chance from the green,” he said. “It didn’t happen at the beginning of this round, and I’m really happy with how I finished on the back nine.”

Senior Triston Fisher was TCU’s second finisher, placing tied for 38th at 9-over 219. First-year Alejandro Aguilera had his best round of the tournament, shooting 1-over 71. He finished tied for 55th, one spot behind senior Pierre Mazier, who tied for 52nd.

“The truth of the matter is we’ve played here so many times that I expected us to play better than we did, I’m very disappointed,” said TCU head coach Bill Montigel. “I’m very proud of Stefano, we’ve just got to get other guys to perform at that level.”

The Horned Frogs will return to competition in a couple of weeks when they play at the first Big 12 Match Play Championship Oct. 12-14 in Hockley, Texas.

“We can learn from this, we still have an incredible amount of golf ahead of us, so hopefully we can rebound from this,” said Montigel.

Losing streak comes to a halt with victory over Iowa State