Losing streak comes to a halt with victory over Iowa State 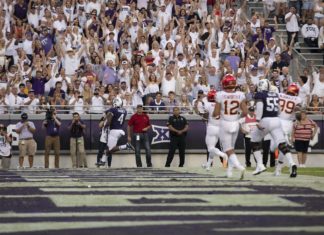 “We knew these guys are hard to score on, and I told [my team] we had to play a fourth quarter ball game where whoever made less mistakes and made plays was who was going to win,” Patterson said.

Both teams were sloppy out of the gates. TCU recorded 26 yards of offense on their first two drives, and the first quarter ended without any points on the board. The scoreless tie after the first quarter was the first the Horned Frogs had been a part of since 2009’s contest against SMU.

“The scheme they run on defense is physical, and it surrounds people, which makes it hard to beat them,” said Patterson.

The Horned Frogs put together their longest drive of the night early in the second quarter. Starting on their own 10-yard line, TCU was able to string together a few first downs courtesy of a couple Shawn Robinson passes to wide receiver Jalen Reagor and running back Sewo Olonilua, as well as a 12-yard run by running back Darius Anderson. The drive ended with a Robinson fumble on Iowa State’s 22-yard line.

ISU didn’t take long to capitalize on the takeaway, finding the end zone on four plays, concluding their scoring drive on a play-action pass from quarterback Zeb Noland to tight end Charlie Kolar for a three-yard strike.

On the next drive, Robinson was a perfect five-for-five with 57 yards passing, including the 10-yard screen pass touchdown to first-year wide receiver Taye Barber, which knotted the game at seven with 7:35 to go before halftime.

It took just 49 seconds in the third quarter for the Horned Frogs to double their lead. Safety Innis Gaines came blitzing and jumped on Noland, forcing a fumble, and TCU defensive end Ben Banogu scooped up the football for a 47-yard scoop-and-score.

“Innis made one of those Innis Gaines plays,” Banogu said. “We practice the scoop-and-score drill every week in practice, so I saw the ball on the ground, picked it up and got into the end zone. Anything I can do to help the team win or give us an extra boost, I’m all for it.”

What appeared to be another promising drive for the Frogs ended at the ISU eight-yard line. Following a completion on a Robinson rollout, tight end Artayvious Lynn attempted to hurdle the Cyclone defense but collided with ISU defensive back D’Andre Payne and fumbled for Iowa State’s second takeaway of the night.

“We turned the ball over when it should’ve been a two-score game,” Patterson said.

Facing a third and 25 on their own 43-yard line, Banogu appeared to have Noland wrapped up for a sack, but the Cyclone QB escaped and tip-toed his way down the left sideline for a 28-yard gain and a first down.

“You can make the play nine out of ten times, I missed that one and I feel like that play could’ve changed the whole outcome of the game in a faster pace,” Banogu said.

Five plays later, Cyclone running back David Montgomery plunged into the end zone from a yard out on third down to even the game at 14 with 7:51 left to play.

The Horned Frogs made quick work following the touchdown, advancing to the ISU 43 in five plays, but facing a third and five, Robinson unloaded toward wide receiver Derius Davis who was in triple coverage just outside of the end zone. The football landed in Cyclone defensive back Braxton Lewis’ hands for an interception, Robinson’s fifth interception and eighth turnover of the season.

The Horned Frogs have turned over the football ten times in the last three games against Ohio State, Texas and Iowa State while forcing just one takeaway: Banogu’s 47-yard scoop-and-score against the Cyclones.

With 3:49 left to play, the TCU offense reached the Cyclone 11-yard line following a 19-yard completion to Reagor over the middle, but that would be Robinson’s final pass of the night as he suffered an injury on the following play after taking a hit on a read-option keeper. Three plays later, TCU regained the lead for good on a 28-yard Jonathan Song field goal with 37 seconds to go.

The Horned Frogs have their bye week upcoming, and it couldn’t come at a better time with Robinson on the mend, dealing a nagging shoulder injury.

It could be Michael Collins’ time should Robinson not be ready to go in a couple weeks against Texas Tech. His teammates voiced confidence in the Penn transfer being up to keep the offense moving.

“I don’t really think we have a backup quarterback because both of those guys are guys that can start and do well for us,” TCU linebacker Ty Summers said. “Things that impressed me about [Mike] is he’s strong, works really hard in the weight room, and he can move around well on the field. He has a strong arm, one of the strongest I’ve seen outside of Trevone Boykin.” Read More