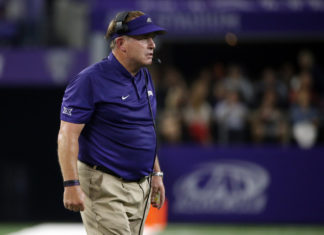 TCU football head coach Gary Patterson is the most successful coach in Horned Frogs program history with 163 wins in his career in Fort Worth. He’s already been immortalized outside of Amon G. Carter Stadium as one of the greats with a statue next to legendary coach Dutch Meyer and 1938 Heisman Trophy winner Davey O’Brien.

Yet, Patterson remains unyielding when it comes to his game preparation and film study, pulling up tape on Texas Tech stars from then and now including Kansas City Chiefs quarterback Patrick Mahomes.

“You’re never surprised with anything when game-planning with Coach P,” said linebacker Alec Dunham. “He’s a guy that’s looking at everything. Coach P just tries to uncover every rock and leave no rock unturned.”

The fire that still burns strongly inside Patterson 21 years into his time TCU comes from his parents, Gail and Keith, and their blue-collar attitudes.

“She was a nurse for 40 years, and my dad leveled land for 50 years, it’s what they did, and I thought I would be remiss if I didn’t make a note of it by understanding what they do,” Patterson said. “They are the reason why my brothers and sisters turned out the way they did. We didn’t have anything, but we didn’t know that. They always found a way to make sure we had an education, clothes and everything we had to do.”

Both were, in the words of Patterson, “big Frog fans.” Patterson said he visited his dad shortly before he passed, and his dad didn’t want to talk about himself, but rather that his son needed to get back to recruiting in order to build the best TCU football team possible.

When he went up to see his mom following TCU’s win against Iowa State, she had a similar idea when she told her son to return to Fort Worth and prepare for Texas Tech.

“People say, ‘Why have you been as driven?’” Patterson said. “You’re driven because you had parents that actually drove you and you wanted to make sure that you paid them back for all the hard work they did.”

So when you see Patterson yelling himself red in the face to ensure his defense is lined up correctly before each play begins, you’ll know the reason why: the desire to provide a better life for his family.

“Everybody has parents, everybody has people that have given them a chance to be where they need to be and to be honest with you, that’s what you try to accomplish,” Patterson said. “When you leave, the best way you can pay them back is you can pay them back by trying to be successful. If you’re successful enough, you can actually help them through their life that it’s better and do things.”

The point Patterson concluded his Tuesday reflections with was to make sure others appreciate their family and prioritize spending time with them.

“They were both really good people, like a lot of other parents out there in the world, and you all need to make sure you don’t take them for granted. I’ve worked too hard in my life, whether it’s my family, or my kids, or my parents, where you don’t spend time. You spend most of your time doing this, so make sure you don’t do it the way I do it.” Read More