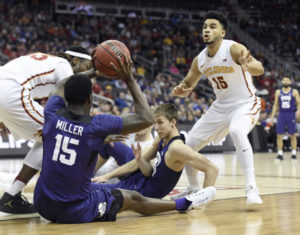 Playing their third game in three nights, TCU’s fairy tale run in the Big 12 Tournament ended with a thud Friday night after a 21-point loss in the Big 12 semifinals against No. 23 Iowa State, 84-63.
“We don’t want to say fatigue was a factor, but when you go out there and missing layups, most of your jump shots are missing short, not running back on defense, not as active on loose balls as we were the two previous games, it was pretty evident,” TCU guard Brandon Parrish said. “But regardless of fatigue we tried to fight in spite of the outcome, in spite of shots not going our way, I feel like we still gave it our all and just came up short.”

The game began to turn in favor of the Cyclones with 13:54 left in the first half when Iowa State went on a 10-0 run to put themselves in front of the Horned Frogs 16-10. The Cyclones had another big run to conclude the first half, finishing the first 20 minutes with a 21-9 run in the last 8:30 of action.

“They played well and we didn’t,” TCU head coach Jamie Dixon said. “Give them credit, they’re playing at a high level and they earned it.”