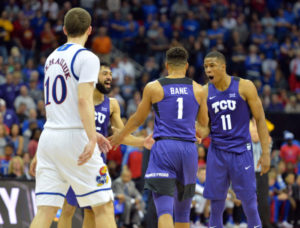 TCU shocked the college basketball world Thursday afternoon in the Big 12 Tournament, defeating the No.1 Kansas Jayhawks in the quarterfinals, 85-82.
“Great win for our program, our school, our university and a great win for these guys,” TCU head coach Jamie Dixon said. “All we did today was make free throws down the stretch, and that’s what we hadn’t done and I think that’s growth and I think that’s maturity and I’m looking forward to getting ready for tomorrow, and I know these guys are as well.”

TCU freshman guard Desmond Bane made three free-throws with 2.5 seconds left to play to break an 82-82 tie, and Kansas missed a potential game-tying three-pointer at the buzzer.

Dixon didn’t know if Bane was even going to shoot the free throws after the hard hit that drew the foul from beyond the arc.

“He got knocked — he got hit so hard I was wondering if he was going to be able to shoot the free throws,” Dixon said, “He’s the guy we wanted shooting.”

Bane rewarded his coach’s faith by staying cool under pressure.

“We ran a high-ball screen for one of our better penetrators, Alex Robinson, and I know he likes to throw that drift pass to the corner and I was spotting up, hands-free, ready, and he found me and I shot and luckily I got fouled, stepped to the line, all my teammates came up to me, tried to calm me down, make sure everything was cool and I stepped up to the line and knocked ’em down,” Bane said.

Dixon stumped for his team to receive an at-large bid after his team’s milestone win. Read More