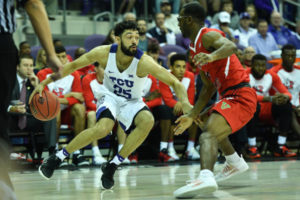 Early in his first season in Fort Worth, TCU head coach Jamie Dixon said this season was ‘to be a season of firsts.’
After the Horned Frogs knocked off Fresno State, 66-59, in their first round game of the National Invitation Tournament, this year’s squad became the program’s first in a dozen years to win at least 20 games.

“Twenty wins is a lot. It’s hard to do,” Dixon said. “It’s something that we expect to be a standard. I want 20 to be something we hit in early February, not in the middle of March. But that’s what our goal is and we’ve got to keep doing it. We’re excited. This is a big step. Postseason wins are good.”

TCU raced out in front Wednesday, not allowing the Bulldogs to make a field goal for the first 4:45 and jumping to a nine-point lead, 13-4.

For the majority of the first half, TCU was out in front until Fresno State started to hit their three-pointers. The Bulldogs’ long-range attack put them ahead by a point, 43-42, before a powerful slam dunk by TCU forward Kenrich Williams at the 11:26 mark quelled the FSU run. Williams recorded his Big 12-high 15th double-double this season, with 13 points and 10 rebounds. The dunk set the tone for TCU the rest of the way. Read More