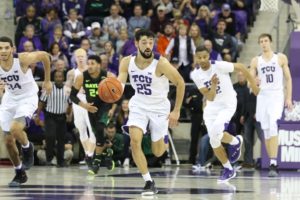 Dallas-Fort Worth native and TCU sophomore guard Alex Robinson Jr. was named the Big 12 Newcomer of the Week on Monday after leading the Horned Frogs to wins over Kansas State and Texas last week.
The Timberview High School alum averaged 14.5 points, eight assists and four rebounds in wins over Kansas State and Texas. Robinson Jr. totaled 12 points, eight assists, four rebounds, two blocks and two steals while playing all 45 minutes in TCU’s 86-80 overtime win against the Wildcats on Feb. 1, which was the Frogs’ first win in Manhattan since joining the Big 12 in 2012.

Robinson scored 17 points and had eight assists, four rebounds and two steals in TCU’s 78-63 win over Texas to give the Frogs their first sweep over the Longhorns since 1987. The win gave TCU its fifth Big 12 win, the most of any season since joining the conference.