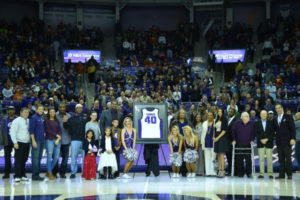 “I came back and I was looking for Kurt’s jersey up in the stadium thinking, ‘Where’s his number? Where’s he at?” Dixon said. “When I was told TCU hadn’t retired it…I guess when you’re playing 17 years in the NBA, you’re a little busy on Friday’s and Saturday’s.”

Thomas was humbled and surprised by TCU’s gesture.

“This is so special, and I never thought this day would happen,” Thomas said. “To see my number being retired at this university, it means everything because it really lets me know that the hard work that I’ve put in to get from the beginning to the end to this day was definitely worth it.”

Thomas played outstanding basketball when he was wearing his Horned Frog uniform from 1990 to 1995. His 1,512 points rank seventh all-time at TCU and his 782 rebounds rank eighth.

In his senior season in Fort Worth, Thomas’ game advanced to another level. During the 1994–95 season, Thomas led the NCAA in both scoring and rebound with 28.9 PPG and 14.6 RPG. He was named a Third-Team All-American in 1995 and became the 10th overall pick in the NBA Draft.

“No one even considered me going in the first round of the draft when I got to college,” Thomas said. “I was able to have some success out there on the floor and mess around and get drafted.” Read More