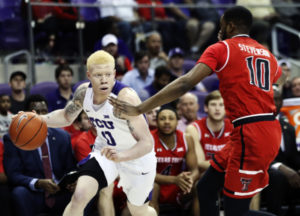 CU snuck past the Texas Tech Red Raiders Tuesday night in Fort Worth after sophomore Alex Robinson Jr. hit one of two free throws with 1.4 seconds left to give the Horned Frogs their one-point advantage.
The Horned Frogs are now 6-5 and in fourth place in the Big 12. The six conference wins are their most in five Big 12 seasons. It is also the latest in a Big 12 campaign that TCU has been over .500 in conference play. The win also gave the Frogs their first three-game winning streak in five seasons of Big 12 play.

“The win puts us in fourth in the Big 12, and it’s good but not enough,” TCU head coach Jamie Dixon said. “We’ll go forward from here.”

Robinson Jr. was fouled from behind on a drive to the hoop after it appeared that Robinson may have slightly lost control of the ball. The Red Raiders and Horned Frogs had disparate views on the game’s final whistle.

“In my opinion, I think the game should go to overtime and let the players decide the outcome,” Texas Tech head coach Chris Beard said.

TCU players and coaches alike were united on whether not the officials made the correct call.

“Absolutely,” sophomore JD Miller and freshman Jaylen Fisher said when asked if the foul call at the end of the game was correct.

Dixon didn’t have the same vantage point as his players on the court.

“Alex was right in front of me so I could really see it,” he said. “We got fortunate on the drive there, but we have to get better at some things.”

Once Robinson went to the line, his teammates were confident the results of his trip.

“I knew we won when I saw him going to the line,” Fisher said. Read More