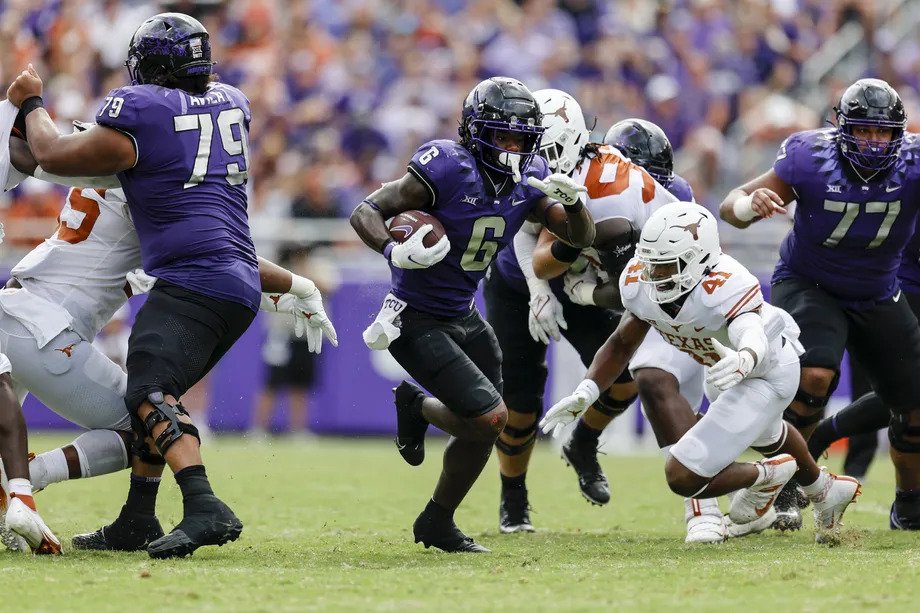 It’s amazing how fast things can change in weeks. Two weeks ago TCU was 2-0 after pulling out a narrow victory against California-Berkeley, and sophomore running back Zach Evans, the only five-star recruit in Horned Frog football history, was Big 12 Offensive Player of the Week after a performance with 22 carries, 190 rushing yards and a 51-yard rushing touchdown. Here were TCU head coach Gary Patterson’s comments after that game.

The “we’ll just keep running him” piece of those quotes sticks out like a sore thumb because Evans has received exactly 15 carries in each of the last two games, both one-possession losses for the Horned Frogs. The 15 carries become even more notable in comparison to another five-star running back from Evans’ recruiting class, Texas Longhorns sophomore Bijan Robinson, was given the Tennessee Titans Derrick Henry treatment in Texas’ 32-27 win at TCU last weekend. Robinson ran for 216 yards and two touchdowns on 35 carries. Robinson also iced the game when he converted 3rd and 6 into a first down with 2:31 to play.

Patterson maintained Evans workload had everything to do with the long-term in mind, which could be a hard thing for Horned Frog fan to hear when they don’t know if they’ll see another Texas at TCU football game at Amon G. Carter Stadium for awhile due to the Longhorn impending move to the Southeastern Conference.

“I would never do 35 carries a game like they did with the guy at Texas if you want to make it through four years,” Patterson said. “You’ve got to be very careful about that. That’s his (Texas coach Steve Sarkisian) call. It’s not mine. But the bottom line is you’re trying to make a bigger deal out of this than it is.”

A big deal would also be losing the turnover margin 3-1 to with TCU fumbling away three possessions, two by wide receiver Derius Davis on a reverse from Evans and on a punt return as well as one by quarterback Max Duggan on a 1st down passing play. While it’s easy to play the what-if game, Evans has never fumbled on 111 career carries, but perhaps Evans catching the ball on a reverse or Evans receiving the ball on early downs could relieve some pressure for the rest of the offense. Also, he has the burst to take a play that looks like it’s going for a loss of four yards and turn into a 12-yard touchdown like he did on the Horned Frogs’ opening possession Saturday.

“Would we have liked to maybe run him more? Yes, but it’s easy to sit in hindsight and be a guy on Twitter and be a writer and say you should do this or that,” Patterson said. “At the end of the day, it’s about keeping Zach Evans ... winning ballgames and keeping him healthy. Not only for the 12 games this year, but also for the 12 games next year as a junior. After that, I doubt you’ll see him playing at TCU. “The thing you have to understand is — he needs to get more touches but at the end of the day it’s still about situations. We’re throwing it to him. We’re running it with him. It’s pretty easy to sit from afar and have an opinion about all of that.”

To be fair to Patterson, he pointed out that TCU was able to make a goal line stand by stuffing Robinson from a yard out in the fourth quarter. The Horned Frogs responded with a 99-yard touchdown drive that trimmed the lead to five.

Unless you’re an alien like the NFL’s reigning Offensive Player of the Year, the 6-foot-3, 247-pound Henry, Patterson is right that most players aren’t built for 35 carries a game. However, setting the tone on the ground with your team’s most explosive player in the 20-28 carry range could take some pressure off of Duggan in the passing game via play-action passes and shorter 3rd down situations. Each carry by the five-star is significant as he’s averaging 7.8 yards a carry, nearly a first down every time he runs with the ball, which is the highest yards per carry rate among Big 12 running backs this season who have at least 50 carries overall. Seeing Evans running free in the open field gives his teammates a morale boost.

“He’s the type of guy that drives you,” center Steve Avila said. “He’ll tell you straight up that this is what you’ve got to do and you better do it. I really admire that because he’s just a sophomore and he’s telling older guys what they’ve got to do to be good. “I feel like when younger guys act like older guys is when a team can be really successful.”

Additionally, more running plays keep the clock ticking, which could help a TCU defense that is allowing 27.3 points per game, the 8th-most in the 10-team Big 12 conference, stay on the sideline to catch their breath. While it’s nice to see Patterson keeping Evans’ long term health in mind by not running him 35 times a game, there’s likely a number between 15 carries and 35 that would allow Evans’ five stars to shine a bit brighter. Read More

Play to your strengths: Horned Frogs need to take control on offense vs. Oklahoma