Run Max Run: Patterson wants his quarterback to be a more aggressive runner 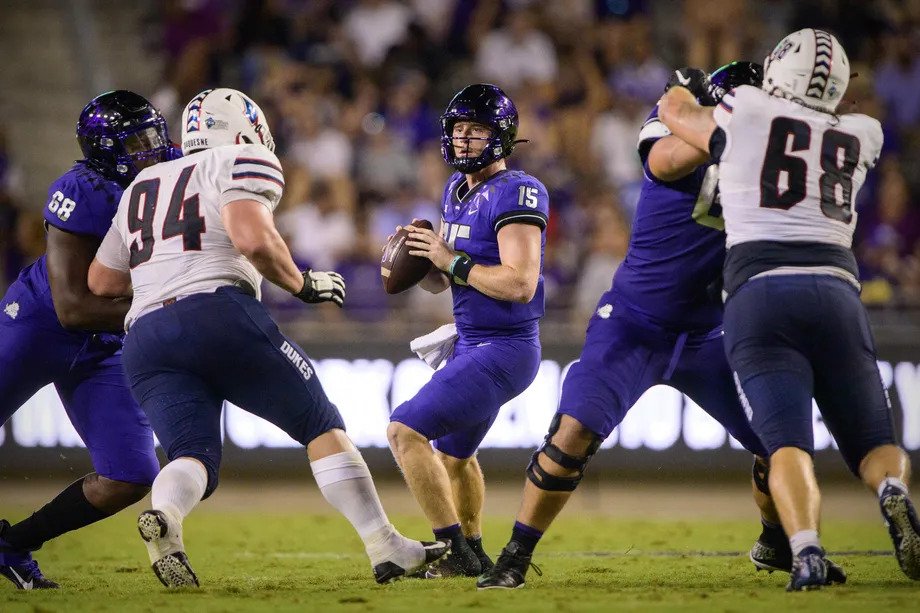 Coming into his junior year, much of the focus was on how TCU quarterback Max Duggan could improve upon his accuracy as a passer. However after seeing Duggan complete 14 of his 19 passes for 207 yards and a touchdown, Horned Frog head coach Gary Patterson had his eyes on what has been his quarterback’s strength since Day 1 during Duggan’s only touchdown pass of the night: his athleticism and ability to challenge defenses on the ground.

“I think it [the touchdown pass] has to do with protection, the fact that you’re not getting caved in there, and that’s the problem with the three-man rush,” Patterson said. “You’re dropping guys back, which gives people time to do things. Max [Duggan] needs to learn to run out of the pocket from that standpoint even more. The quarterback from Cal [Chase Garbers] hurts a lot of people running in the passing game. It affects your coverages on a guy that can take off and beat you with his legs. I don’t think that’s telling Cal anything they don’t know already.”

While Patterson highlighted Garbers as a threat on the ground, the senior has 718 rushing yards in his career, Duggan is in a different stratosphere as a scrambler: the junior has 1,090 yards on the ground, 377 more than Garbers with one fewer year of experience.

Although the man with a statue outside of Amon G. Carter knows what he’s talking about since TCU is 6-3 in the nine career games that Duggan has run for 50 or more rushing yards. His best rushing performance came last season against Texas Tech when he ran for 154 yards and three touchdowns, including an 81-yarder that put the nail in the Red Raiders’ proverbial coffin.

Defense seemingly had an edge in the highest profile games in Week 1 with Virginia Tech pulling off a 17-10 upset of tenth-ranked North Carolina, a team that averaged the ninth-most points in the country a year ago (41.7 points per game) last Thursday. Penn State opened the Saturday slate with a 16-10 win in Madison against Wisconsin. Georgia won a slugfest against Clemson 10-3 in a top five showdown where the only touchdown came via an interception return defensively. No. 20 Washington capped the night with just seven points in a 13-7 loss to Montana, a school in the same tier as TCU’s Week 1 opponent Duquesne.

“It’s kind of like a paisley tie, better in 10 years when you pull it back out,” Patterson said. “It [defense] goes away and it’s terrible, and then all of the sudden you look around and everyone is wearing a paisley tie. I’m old enough to where I’ve gone through three cycles of paisley ties. Everyone has gone through a portion of three linemen and farther back to slow down the big play. The answer to that is people then get bigger. People in the Big 12 are getting bigger with more tight ends and doing all that. It keeps cycling.”

With more and more defenses dropping players back to defend the pass, Patterson’s point about making defenses uncomfortable through the quarterback run makes a lot of sense. Duggan can also help out his defense with better decision-making as the level of competition increases with Pac 12 foe Cal coming to Fort Worth for a 2018 Cheez-It Bowl re-match. The junior quarterback’s one oops moment came on a second quarter interception where he tried to squeeze the football into tight double coverage. It was an ambitious throw following a gain of 47 yards on the previous play. His teammates swept the play under the rug, likely trusting Duggan will be more discerning in more competitive game situations. The Horned Frogs defeated the Dukes 45-3.

“As soon as we got to the sideline, I just said [to Duggan], ‘It’s cool. Just forget about it. Just get it out early,’” Senior wide receiver Taye Barber said. “We won, and that’s really all that matters.”

In his 21 years as TCU’s head coach, Patterson is undefeated (7-0) against the Pac-12, but the last three matchups against the conference in bowl games have provided plenty of drama and ugly wins. The 2015 Alamo Bowl ended with a 47-41 TCU win in triple overtime over Oregon after trailing 31-0 at halftime. The 2017 Alamo Bowl ended with a 39-37 win over Stanford after the Horned Frogs trailed 21-3 in the second quarter.

However, the 2018 Cheez-It Bowl had a different kind of fireworks: nine total interceptions and a 10-7 overtime win for TCU. It’s hard to forecast what kind of drama will occur Saturday in Fort Worth, but the outcome for TCU will likely have a major impact on how successful the Frog’s 2021 season will be. Read More