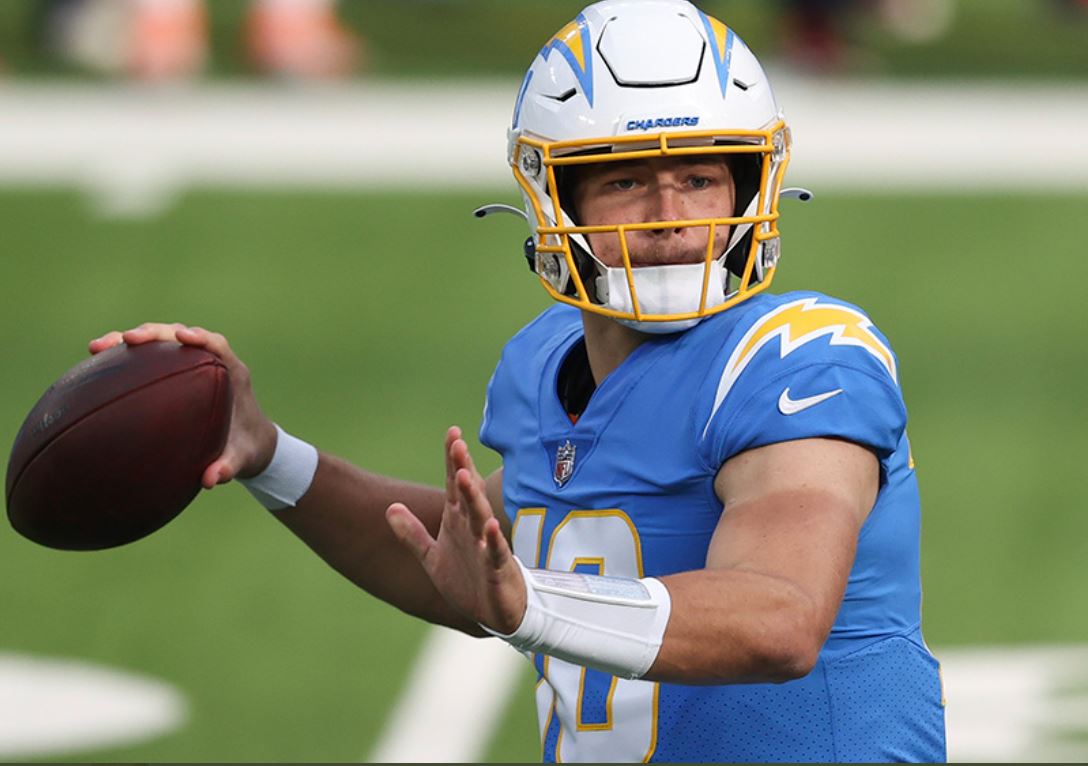 Aaron Rodgers won the 2020 NFL MVP award by putting up an all-time season while turning 37. Lamar Jackson won in 2019 by breaking new rushing ground. Patrick Mahomes won in 2018 by playing quarterback like no one ever had before.

But while those paths to glory might seem wildly different, there is one common factor, something that might even help predict who takes home the award next: being in Year 2.

Rodgers was in Year 2 in Packers coach Matt LaFleur's system when he threw for a career-high and league-best 48 passing touchdowns, in addition to totaling the second-highest single-season passer rating (121.5) in NFL history.

Jackson was in Year 2 of his NFL career with the Ravens when he led the NFL with 36 passing touchdowns while racking up the most rushing yards (1,206) by a quarterback in a single season.

Mahomes was also in Year 2 of his NFL career with the Chiefs when he joined Tom Brady and Peyton Manning as the only players in NFL history to record 50 passing touchdowns in a single season.

They weren't the only ones to shine in their second years in new situations. The most prolific MVP season in NFL history, Manning's 5,477-yard, 55-TD 2013 campaign, came in his second year with the Denver Broncos. And one of the most iconic MVP efforts of the last 40 years, Dan Marino's epic 1984 season, in which he became the first QB to pass for 5,000-plus yards and 45-plus TDs, was also one of the best sophomore seasons ever.

With the 2021 NFL season upon us, here's a look at nine candidates in prime position to win MVP via their own Year 2 springboard:

YEAR 2 WITH A NEW COACH

Prescott's importance to Dallas is illustrated by what happened after he was lost to a Week 5 ankle injury last season, Mike McCarthy's first as Cowboys head coach. Weighed down by a defense that allowed 29.6 points per game (the second-worst mark in team history behind the 30.8 points per game allowed by the Cowboys in 1960, the franchise's inaugural season), Dallas finished 6-10, its worst record of the Prescott era. Before the injury, Prescott led the NFL's top total offense (509.5 total yards per game) in Weeks 1-4. He threw for 1,690 yards in that span, breaking the mark for the most yards in a player's first four games to start a season, surpassing Hall of Famer Kurt Warner's 1,557 in 2000. Powering a high-profile return to the playoffs for "America's Team" after a three-season absence would do wonders for Prescott's MVP case.

The foundation of Coach of the Year Kevin Stefanski's offense was built on play-action passing in 2020. Baker Mayfield's 124.8 passer rating on play-action passes was the fourth-highest in the NFL -- but Chubb is key. Despite missing time with injury, Chubb ran for 1,067 yards (seventh-most in the NFL) and 12 touchdowns (tied for fourth-most in the league), becoming the first player in the entire league -- not just Cleveland history -- to reach 1,000 yards and 12 rushing TDs in 12 or fewer games since Hall of Famer and three-time MVP Jim Brown did it for the Browns in 1959 (1,329 rushing yards, 14 rushing TDs). In the four games Chubb missed, Cleveland went 2-2. Chubb allows Mayfield to execute Stefanski's offense at the highest level, and if the Browns take another step forward in Year 2 under the coach, the newly extended running back should get plenty of shine.

YEAR 2 WITH A NEW TEAM

There is good reason to believe Brady did not hit his Tampa Bay ceiling in his first season with the Buccaneers. In his first 12 games, he threw 28 passing touchdowns and 11 interceptions, while Tampa started 7-5. After 20 years in New England, Brady presumably needed time to adjust to a new scheme and setting, and he was apparently able to make himself more comfortable -- because from Week 14 on, Brady threw for 22 TDs against just four picks, while the Bucs won eight straight en route to capturing the Lombardi Trophy. Brady finished the regular season in the top three in passing yards (4,633) and passing TDs (40) despite playing with an MCL tear reportedly suffered in 2019. With Tampa returning all 22 starters and Brady now having a full year in Bruce Arians' system under his belt, 2021 could be even better for the 44-year-old QB than his outstanding 2020.

No receiver has ever won the MVP award -- but Diggs could buck that trend after making history in his promising initial season with the Bills. With a career- and league-highs in targets (166), receptions (127) and receiving yards (1,535), Diggs became the first player in the Super Bowl era to lead the NFL in receiving yards in his first season with a new team. Diggs will face some competition in the MVP realm from his quarterback, Josh Allen, who was the runner-up for the award in 2020. But one could position Allen's production as a strong argument for Diggs' candidacy: Allen threw more passing touchdowns (37) and fewer interceptions (10) with Diggs in 2020 than without him in 2018 and '19 (30 passing touchdowns and 21 interceptions combined).

YEAR 2 IN THE NFL

Herbert's sizzling first career start (he threw for 311 yards and a TD while going toe-to-toe with Patrick Mahomes in a Week 2 overtime loss to the Chiefs) was a sign of things to come. Herbert went on to set an NFL rookie record with 31 passing touchdowns, ultimately securing the 2020 Offensive Rookie of the Year award. And he did that despite working behind an offensive line that earned Pro Football Focus' worst run-blocking grade and third-worst pass-blocking grade. Imagine what he'll be able to do with the time provided by a unit that now includes first-team All-Pro Corey Linsley at center and first-round pick Rashawn Slater (who has been able to do this against Joey Bosa in practice) at tackle. Herbert will have to adjust to new coach Brandon Staley and coordinator Joe Lombardi, but the improved line could help make up for that challenge.

The Bengals' big bet on Burrow paid off: The No. 1 overall pick in 2020 averaged 40.4 passing attempts per game, the most by a rookie in NFL history, and 268.8 passing yards per game, third-most by a rookie in NFL history, before his season was shortened by a torn MCL and ACL in November. A return to health by both Burrow and Joe Mixon (the running back was limited to six games by a foot injury last season) should help boost Burrow's performance in 2021. Another factor in Burrow's favor is his reunion with former LSU teammate Ja'Marr Chase, who joins receivers Tee Higgins and Tyler Boyd to give the Bengals a full complement of promising weapons who all enter the season at age 26 or younger. Cincinnati's defense leaves much to be desired; though the O-line remains a concern, the Air Raid attack led by Burrow and Co. could be even more potent in 2021.

Just four players finished 2020 with more than 1,400 scrimmage yards and 12 scrimmage touchdowns: Derrick Henry, Dalvin Cook, Alvin Kamara and Taylor, who managed to finish third in the NFL in rushing yards (1,169) despite being a rookie. He came on like a wrecking ball at the end of the season, totaling 741 rushing yards in Weeks 11-17 -- the second-most in that span, behind only Henry. With Carson Wentz set to potentially miss the start of the season after undergoing foot surgery, Taylor will likely be leaned on more to begin 2021. And even after Wentz returns, the QB's past penchant for turnovers and sacks (he led the NFL in both categories last season) means Taylor could be primed for a key role driving the offense.

If you guessed Quarterback A was Tagovailoa, you're correct. There's been some hand-wringing about a lack of deep completions in 2020 (he had just seven of 20-plus air yards). But Tagovailoa led the NFL with a 47.5 completion percentage on tight-window throws (in which the targeted player has fewer than 1 yard of separation), among those with a minimum of 40 such throws. I will allow that this is an especially bold prediction. And yet, this is his first fully healthy offseason after dealing with rehabilitation from a college hip injury in 2020. The Dolphins have also added track star (and former Alabama teammate) Jaylen Waddle and the explosive Will Fuller to the pass-catching arsenal. So it's plausible to imagine Tagovailoa taking a Marino-like leap as a sophomore.

Young led all rookies with 7.5 sacks and 10 tackles for loss in 2020, earning Defensive Rookie of the Year honors. The Football Team stumbled into the playoffs last season with a 7-9 record on the strength of Young and a top-five defense. Washington added Ryan Fitzpatrick at quarterback, but he's prone to roller-coaster swings and has missed the playoffs 16 years in a row (that's the most consecutive seasons missing the playoffs by a player in NFL history). If Washington is to stave off a healthier Dallas team in the NFC East and win consecutive division titles for the first time since capturing three straight from 1982 through '84, Young might have to take his game to Lawrence-Taylor-in-1986 levels -- that's when Taylor led the NFL with 20.5 sacks and became the last defensive player to win MVP. Read More