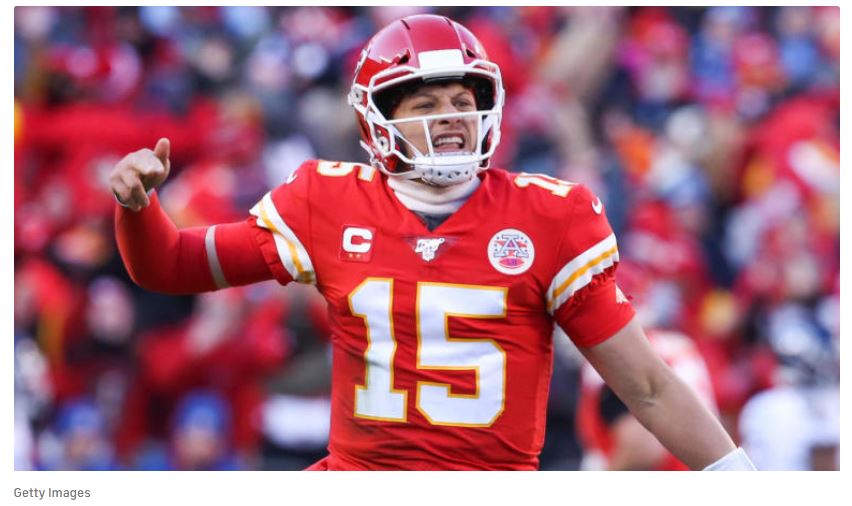 Tyreek Hill shocked the NFL this offseason by leaving the Kansas City Chiefs and Patrick Mahomes for Tua Tagovailoa and the Miami Dolphins. With the NFL salary cap slowly enveloping the Chiefs' spending ability like a boa constrictor with the first year of Mahomes' 10-year, $450 million deal kicking in this upcoming season, Hill ran toward the money like he runs toward the end zone, in a blur, once contract talks fell apart with the Chiefs.

The wide receiver demanded a trade in order to find his pay day, which the Dolphins provided in the form of a four-year, $120 million deal with $72.2 million in guaranteed money. The move makes Hill the highest paid at his position annually (average of $30 million per year). However, it's still stunning to see Hill leave his first NFL home, where he was on a Hall of Fame trajectory as Mahomes' top wide receiver.

Elite company
Here's a look at the wide receivers in NFL history to total 450+ receptions, 6,500+ receiving yards and 55+ receiving TDs in their first six seasons:

Likewise, Mahomes, alongside Hill and tight end Travis Kelce, also seems to be on a path toward Canton through the first five seasons of his career. After making 63 starts in his young, five-year career, he is on pace for one of the most prolific careers in NFL history. Mahomes has the most passing yards (18,991) and highest passer rating (105.8) through a player's first 63 starts since 1950. Only Hall of Famer Dan Marino had more passing touchdowns (156) than Mahomes' 151 through a player's first 63 starts in that span.

Naturally, Hill took to saying the grass is greener and called Tagovailoa the more accurate deep-ball passer over the 2018 NFL MVP and 2019 Super Bowl MVP Mahomes, which caught his former quarterback off guard.

"I'm surprised a little because we love Tyreek [Hill] and we still love him," Mahomes said on June 16 at Chiefs minicamp. "I saw him out at Formula 1 in Miami in May. I'm sure it had something to do with his podcast and getting that rolling. I still love Tyreek, he's a one-of-a-kind player. But as you know in Coach [Andy] Reid's offense, it takes the whole team. This offense was rolling before I got here, this offense was rolling when I was a young [Dallas] Cowboys fan watching the Eagles beat up on the Cowboys. It's an offense that's more than one player and that includes myself."

Since Mahomes became the Chiefs' starter in 2019, Reid and offensive coordinator Eric Bieniemy have let the offense roll from their quarterback's right arm, opting to pass at one of the highest and most up-tempo rates in the NFL in order to achieve victory each season since 2018. 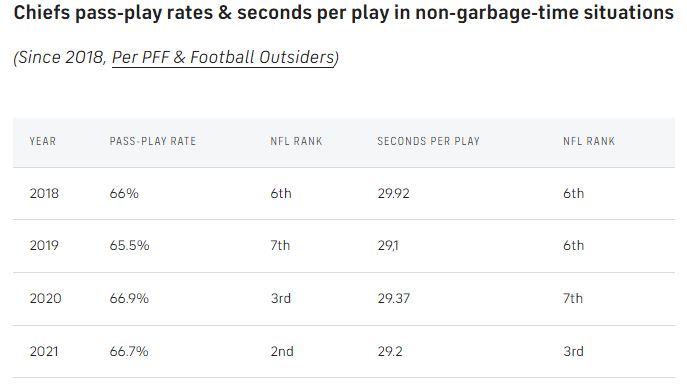 Even though Hill broke the Chiefs' single-season receptions record in 2021 with 111 catches to go along with 1,239 receiving yards and nine receiving touchdowns, Mahomes isn't sweating his departure or his comments.

"As long as we're winning football games and putting up points, I think I'm doing my job the right way," Mahomes said. "It doesn't have to be the best accuracy or the best completion percentage in the world as long as we're scoring touchdowns and winning Super Bowls, I'll take it."

Mahomes ensured the Chiefs continued scoring touchdowns in the brief four games he has played without Hill -- Weeks 2-5 in the 2019 season -- when Hill missed time with a shoulder injury. A spotless 8-0 touchdown-to-interception ratio and 108.9 passer rating both ranked in the top five among NFL quarterbacks in that four-game span. The Chiefs continued to run their offense, throwing 66.3% of the time, the sixth-most in the NFL during those four weeks in 2019.

In Mahomes' first game without Hill since becoming the Chiefs quarterback in 2018, he put up the best single-quarter performance over the last four seasons. Week 2 of the 2019 season and facing the AFC West rival Raiders, Mahomes threw for 278 yards, four passing touchdowns and no interceptions on 12 of 17 passing (70.6%) in the second quarter of a 28-10 Kansas City win. No one has thrown for more yards or had a better touchdown-to-interception ratio in a single quarter than Mahomes did in that game, which happened to be his first game without Hill since 2018. 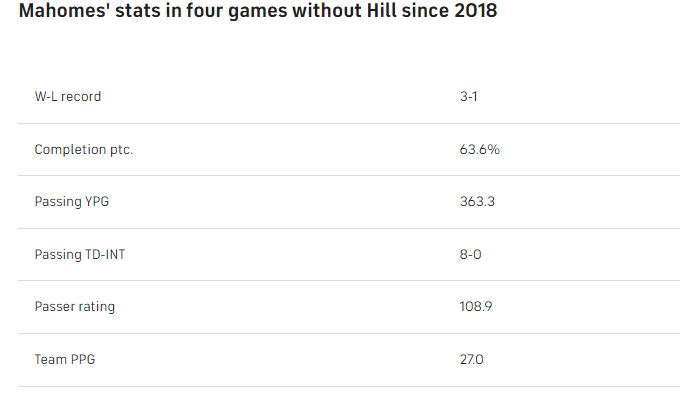 Here's a look at who could be in line to pick up the slack and the vacated targets (159, 7th-most in the NFL last season) in the Chiefs' offense over the long haul in 2022 following Hill's abdication of the Chiefs' top receiver spot.

Travis Kelce, unsurprisingly, dominated the four-game stretch without Hill by totaling 25 receptions, 351 receiving yards and a touchdown. The tight end's 351 yardage total on 14 yards per catch ranked as the fifth-most in the NFL from Weeks 2-5 of the 2019 season behind only Cooper Kupp (459), Chris Godwin (458), Michael Thomas (420) and Amari Cooper (406).

Rain or shine, Kelce is going to produce: 2021 was his sixth consecutive season with over 1,000 receiving yards. The next-longest streak of 1,000-yard seasons by a tight end is Greg Olsen with three. Some other notable players with exactly six straight seasons with 1,000 or more receiving yards in their careers include Hall of Famers Randy Moss and Calvin Johnson in addition to Julio Jones, Antonio Brown and Chad Johnson. Through his nine-season career, Kelce has no equal at his position when it comes to helping his team move the ball up and down the field with 1,097 more receiving yards than the next best tight end, Jason Witten, through the span of his career. 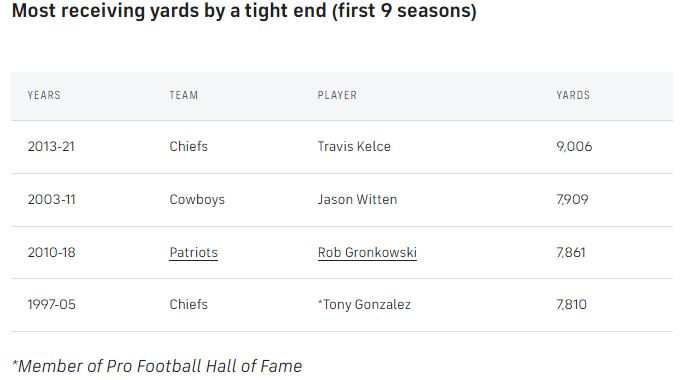 No matter who is out there surrounding Mahomes and Kelce, they will continue to make magic.

The Chiefs opted not to chase one established player via trade or free agency to help fill the gap left by Hill, but rather two whose skill sets combine to create a replica of what Hill liked to do.

Maquez Valdes-Scantling (signed for three years and $30 million) was Aaron Rodgers' deep-shot weapon in Green Bay. Just the threat of Valdes-Scantling and his nearly 20 yards per target on average kept defenses honest, opening up over the middle and underneath for Davante Adams and others. His presence could do the same for Kelce and slot specialist JuJu Smith-Schuster, who lines up in the slot nearly 80% of the time. Mahomes has already appreciated why the NFL's back-to-back MVP "loved" having MVS in the green and gold.

"I think he's done a great job of learning the offense pretty fast and making plays when his number has been called," Mahomes said. "He's a smart guy so you can see why he's able to pick things up so fast since he has a good feel for everything. He made a couple plays down the sideline, one-on-one where I just threw it up and let him make a play, and he did. That's a good thing to see and hopefully that carries on into training camp and into the season." 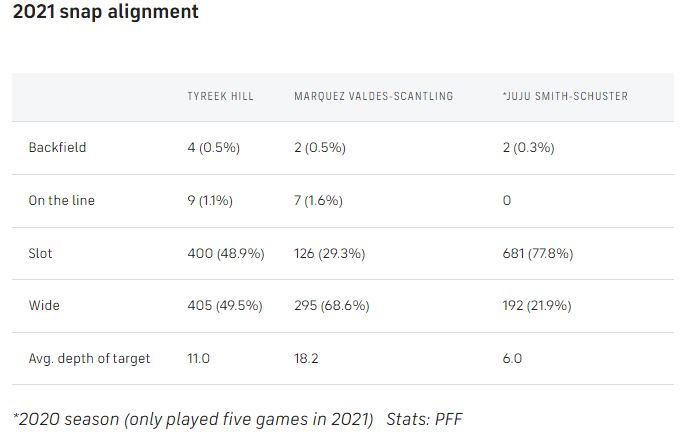 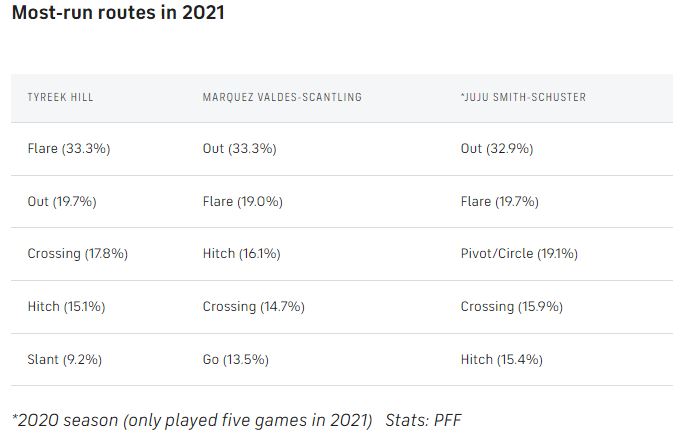 "Yeah, I really have liked the way [JuJu Smith-Schuster and Marquez Valdes-Scantling[ worked," Reid said at the Chiefs offseason minicamp on June 16. "They have a nice connection with Pat [Mahomes] up to this point. I'd be curious to see how it gets when there are live bullets and all that stuff. We'll see how that rolls but I wouldn't expect anything much different than what I've been seeing."

Alongside Roethlisberger before his elbow injury and wide receiver Antonio Brown in 2017-18, Smith-Schuster was a top 10 wide receiver in the entire league in his first two seasons at the ages of 22 and 23. However, his last three seasons have been filled with more questions than answers since Roethlisberger missed all but two games in 2019 with the aforementioned elbow injury, and Smith-Schuster missed a combined 16 games, 12 of which were a result of a season-ending shoulder surgery in 2021. Hence why the one-time Pro Bowl selection is on a one-year, $3.25 million "prove-it" deal. 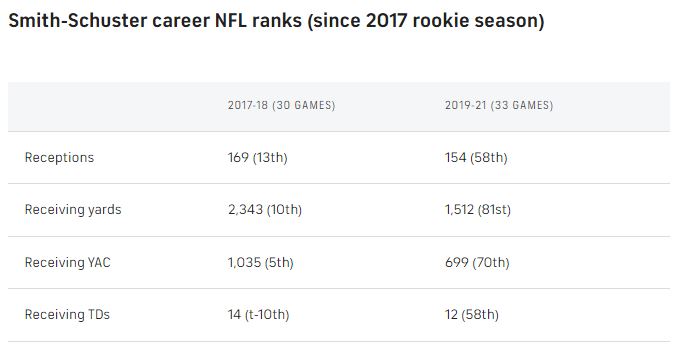 Still just 25 years old, Smith-Schuster may be able to rediscover those early-career heights with more space provided because the defenses will likely tilt toward Kelce and Valdes-Scantling when they step foot on the field.

Second-round pick Skyy Moore's physical traits create a reasonable hope as the Chiefs look around their receiver room as to whom can help piece together Hill's lost production. Standing at 5-foot-10, 195 pounds, he is Hill's exact listed height while weighing 10 pounds more, which could come in handy when making plays over the middle against players a little bit stronger than those in the Mid-American Conference. Moore's hands garnered the most attention at the NFL Scouting Combine where his mitts measured 10¼ inches, the largest among all the wide receivers present in Indianapolis.

The First-Team All-MAC wide receiver out of Western Michigan utilized those hands to set career-highs in receptions (95), receiving yards (1,292) and receiving touchdowns (10) in his last collegiate season – whether the pass was contested over the shoulder or on a breakaway touchdown over 70 yards all the way down the field.

"You know what, he looks strong," Reid said of Moore at minicamp. "You see that in the way he's built physically, but that transfers. You see those big hands he has, he catches everything. He's a good route runner. Smart kid, seemed to pick it up well."

Mahomes being able to get more work in with his new teammates this offseason should allow the Chiefs' offense to get humming earlier than it did last season as the Chiefs started 3-4 with him shaking off an offseason toe surgery. They eventually finished an NFL-best 9-1 to end the 2021 regular season. A reinvigorated Mahomes and time with his new receivers could lead to him making good on what are the second-best odds (+800) to take home his second NFL MVP in 2022.

"Just being in better shape is the best thing about it [this offseason]," Mahomes said. "Whenever you come off injury, you try to stay in shape, you try to ride the bike or do whatever you can, especially with a foot injury. But it's hard to get that running in and to get that sprinting in. And I feel like now I'm at a better point than I was last year as far as explosiveness and conditioning."

A more explosive and better-conditioned Mahomes presents significant danger for the rest of the AFC, no matter who is out there catching his passes, as the Chiefs begin 2022 locked in on their pursuit for a third Super Bowl trip in four seasons.