The New York Jets can follow Joe Burrow and the Cincinnati Bengals' footsteps in going from picking in the top five of the NFL draft in consecutive years to playing postseason football in the 2022 season. Sounds crazy. Yes, the Jets' 11-season playoff drought is the longest active postseason dry spell in the NFL. The last time Gang Green made the playoffs, head coach Rex Ryan, cornerback Darrelle Revis, quarterback Mark Sanchez, and running back LaDainian Tomlinson were in the midst of leading New York to a second straight AFC Championship Game appearance in 2010.

However, change at the top is constant in the NFL. There hasn't been a repeat Super Bowl champion since the 2003-04 New England Patriots, the longest drought of having a back-to-back Super Bowl champion in NFL history. Also, since 1990 (32 straight seasons), at least four teams have qualified for the playoffs in every season that were not in the postseason the year before, including at least seven new playoff teams in three of the last five seasons. 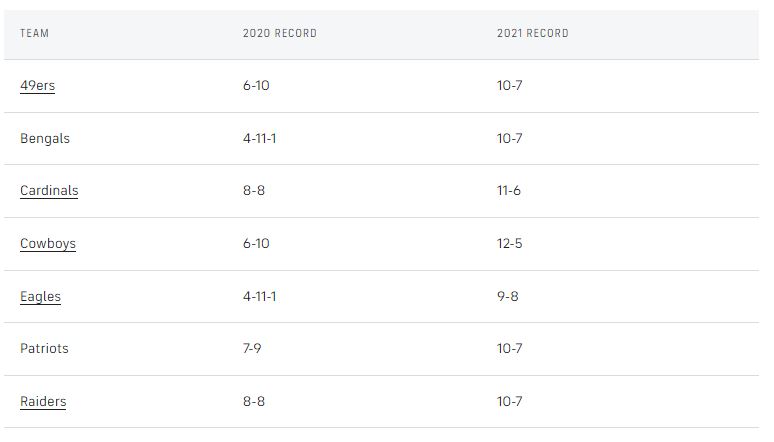 From their head coach and offensive coordinator background, a second-year quarterback coming off a rookie year with plenty of bruises to their talent acquisition styles, the Bengals are clearly the most logical comparison for the Jets when examining the seven teams that joined the postseason party last season after being left on the outside looking in during the 2020 season.

Much of the ever-growing popularization of the outside-zone running/play-action scheme run by the Bengals and head coach Zac Taylor as well as the Jets and head coach Robert Saleh can be traced back to Mike Shanahan's stints as an NFL head coach with the Denver Broncos and the now-Washington Commanders. 49ers head coach Kyle Shanahan (Mike's son), Rams head coach Sean McVay, Packers head coach Matt LaFleur, and Dolphins head coach Mike McDaniel all worked under the elder Shanahan in Washington.

Taylor apprenticed under McVay in Los Angeles as an assistant wide receivers coach and quarterbacks coach before becoming the boss in Cincinnati. Saleh and Jets offensive coordinator and play-caller Mike LaFleur, Matt's younger brother, both worked under Kyle in San Francisco, with Saleh serving as defensive coordinator and Mike as the offensive passing game coordinator. The scheme has helped generations of quarterbacks to some of the best years of their careers, including Hall of Famer John Elway, future Hall of Famer and back-to-back NFL MVP Aaron Rodgers, one of the NFL's career leaders in completion percentage Kirk Cousins, and game managers Jimmy Garoppolo and Jared Goff. This leads into the next point of comparison: the quarterbacks.

Both Joe Burrow, the first overall pick in the 2020 NFL Draft, and Zach Wilson, the second overall pick by the Jets in the 2021 NFL draft, had rough entrances into the NFL. Burrow was sacked 32 times in the first 10 weeks of the 2020 season, second-most in the league in that span ahead of only Carson Wentz during his last season with the Eagles. That punishment led to Burrow tearing the ACL and MCL in his knee, cutting his first season short following Week 10. The Bengals quarterback bounced back in Year 2, earning AP Comeback Player of the Year honors while leading the NFL in completion percentage (70.4%) and yards per pass attempt (8.9) and being the NFL's second-highest rated passer (108.3 passer rating) behind only MVP Aaron Rodgers. Oh, and he had the Bengals one score away from winning the Super Bowl.

Clearly, it would be jaw-dropping for Wilson to accomplish all of that in his second year, too. Although, simply taking a HUGE step forward with an improved supporting cast isn't out of the question. Wilson already flashed signs of growth after a knee injury of his own in his rookie season. Following a PCL injury in his knee that knocked him out for four games from Weeks 8-11, Wilson had a positive TD-INT ratio (5-2) and became much more of a running threat.

"I 100% see greatness," Douglas said on ESPN NY's "The Michael Kay Show" in April. "I see a young quarterback that really went through the ringer to start the year. And what was most encouraging about Zach was when he came back, he maybe had one turnover over the last six games. He was taking care of the football. He was playing within the scheme."

Wilson said he has added 13 pounds of muscle to run his weight up to 221 pounds this offseason, and Jets head coach Robert Saleh has liked what he has seen in the team's offseason workouts so far.

"He looks good, he looks confident — his shoulders are back, he's not caved in," Saleh said before the team's second practice of organized team activities. "He's confident, he's smiling, he's vocal.

"You can always tell the confidence level and their understanding of what they're being asked to do by the volume of their voice. And he's getting pretty loud."

A critical variable for the Jets to possibly make some noise and fly into the playoffs this season is their rapid accumulation of talent surrounding Wilson, not unlike the way the Bengals beefed up their supporting cast around Burrow.

After both teams picked their face-of-the-franchise signal-callers within the first two picks of the draft, they supplemented their supporting casts. Cincinnati kicked off the second round of Burrow's draft in 2020 with wide receiver Tee Higgins joining them at pick 33. The Jets used draft capital from trading Pro Bowl safety Jamal Adams to the Seahawks to add more offensive line help with Alijah Vera-Tucker at pick 14 in the first round, and then added another receiver at the top of the second round, taking Elijah Moore 34th in 2021.

With both teams picking in the top five again after their quarterbacks' rookie seasons, the Bengals reunited Burrow with his LSU teammate, wide receiver Ja'Marr Chase with the fifth overall pick in the 2021 NFL Draft. The Jets had three first round picks in the 2022 Draft -- fourth, 10th and 26th -- with the latter two coming from trades. New York selected cornerback Ahmad Gardner, wide receiver Garrett Wilson, and linebacker Jermaine Johnson, respectively, ending up with a corner who hadn't allowed a single passing TD in college, one of the Big Ten's best pass-catchers, and the ACC's sacks and tackles-for-loss leader. In the second round, the Jets selected running back Breece Hall, who set the NCAA record for most consecutive games with a rushing touchdown (24).

As far as free agency goes, both teams filled out the final three spots along their offensive lines in addition to multiple spots in their defensive backfields with veterans from around the league. Every single starter in Cincinnati's defensive backfield was acquired through free agency except for safety Jessie Bates III. New York signed safety Jordan Whitehead (two years, $14.5 million) away from the Buccaneers and cornerback D.J. Reed (three years, $33 million) from the Seahawks. The Bengals' marquee free agent signing prior to the 2021 season was acquiring former Saints defensive lineman Trey Hendrickson on a four-year, $60 million deal. He exploded for a career-high 14 sacks, fifth-most in the NFL. To continue the symmetry, the Jets have signed multiple former Bengals the past two offseasons, adding defensive lineman Carl Lawson on a three-year, $45 million contract in 2021 and tight end C.J. Uzomah on a three-year, $24 million contract in 2022. These two teams are spitting images of each other, with the Jets just a year behind the Bengals on the same type of roster-building progression.

"It's a blast to get back out there," Jets quarterback Zach Wilson said during offseason workouts at the end of May. "The guys, the additions that we have, the little wrinkles that we added within the offense, and then just the challenge of seeing what we did last year and then trying to apply it and get better as a unit is a lot of fun."

Wilson throwing five touchdowns on 17 of 20 pass attempts during a Thursday practice in June likely isn't the greatest indicator that he's ready to take a Burrow-like jump in Year 2 and take the Jets with him. However, the way New York has emulated a lot of what the Bengals did to build themselves into a position to shock the world with a playoff return in Burrow's second season just might be a sign that Wilson and the Jets potentially could too. Read More