A Day with Dixon: An all-access look into a day with TCU's basketball coach 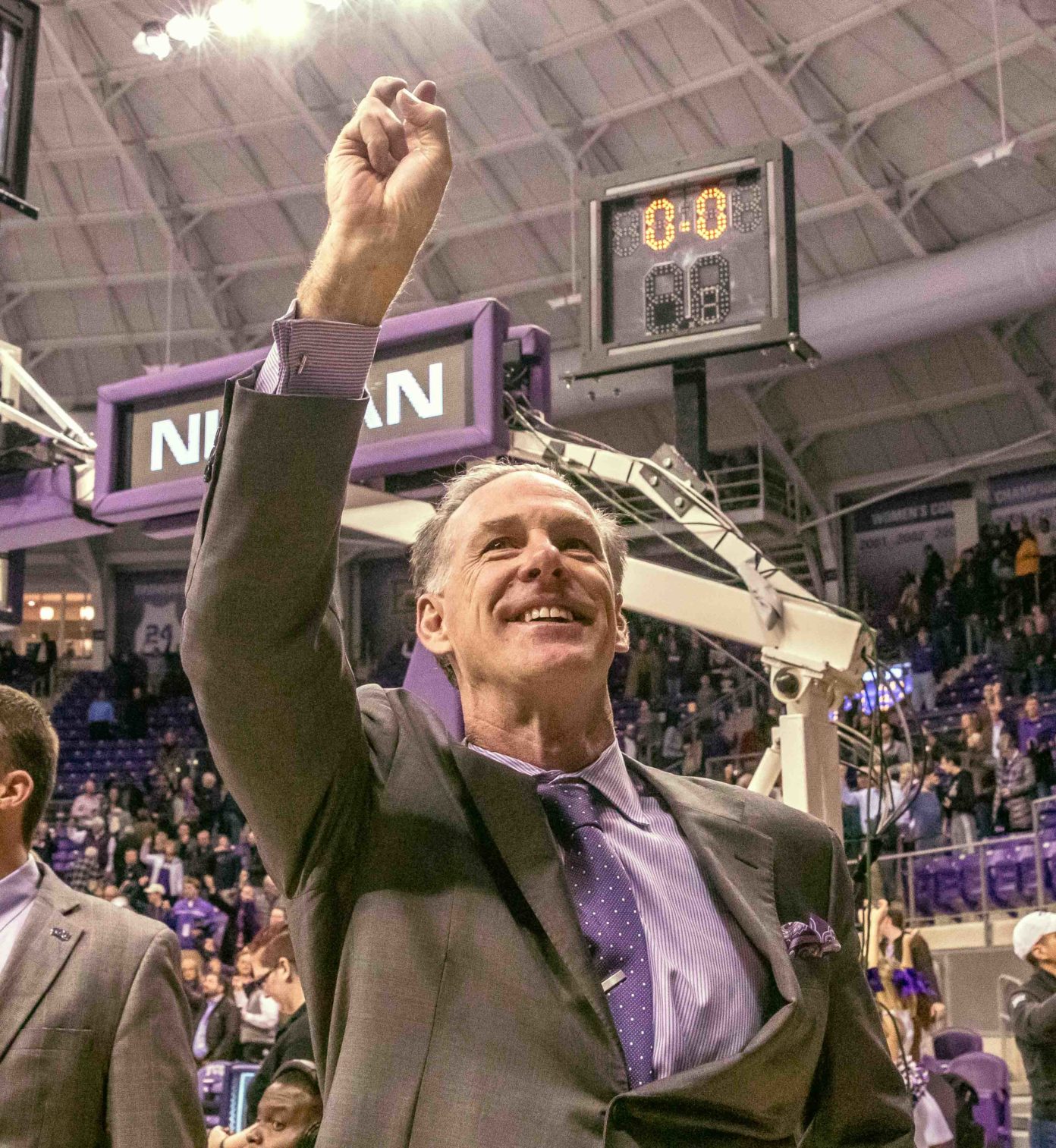 TCU head basketball coach Jamie Dixon strolls into the office at 8:15 a.m. on Dec. 13 wearing a black TCU sweatsuit. A light purple, almost blue polo with the Horned Frog logo is tucked in. Purple and black Nike’s are on his feet.

Despite the casual look, his salt-and-pepper hair was the same as you would see it on any game day: not a hair out of place styled straight back.
He managed a slight grin as he walked in, knowing I was going to be shadowing him for the day.

“Hey Garrett, let’s get started,” he said as he unlocked his office just down the right side of the basketball office hall.

Even though his team’s next game against Indiana State wasn’t until Sunday, Dixon’s work had already begun at his house, where he’d written a practice plan and worked on next season’s non-conference schedule.

The Big 12’s challenge with the Big East starts up next season, which would likely conflict with the Hall of Fame Classic at the Staples Center in Los Angeles in December. The game has treated TCU fondly over the last two years, winning a hard-fought contest against a ranked Nevada team and thrashing USC by 35 points. Instead, Dixon said next season’s non-conference tournament will be the MGM Resorts Main Event over Thanksgiving break.

Before coming into the office, he’d also watched the first half of Indiana State’s last game.

“I don’t have a room where you turn all the lights off to watch because I’ll just watch it right here in my office on my laptop and at home,” he said. “I have my spot at home just at the kitchen table. I have a little office area in my home I can tuck myself away in when the kids have stuff going on, running around in the kitchen.”

Dixon, in his third year as TCU’s head basketball coach, is hands-on when it comes to game-planning, from watching film to keeping track of every little piece of information about his team.

As he soaks in the footage, Dixon flips through a three-ring binder to put one copy of today’s practice schedule into the organizer that’s stuffed with a variety of different clippings, neatly sorted with laminated tabs. He keeps one for every season filled with practice schedules, events, box scores, notes and daily agendas.
Dixon’s meticulous organization also means a file folder is kept for every opponent the Horned Frogs have played during his tenure. Each of his three assistant coaches studies three Big 12 teams closely in order for Dixon to have a complete report when it comes time to play their conference rivals.

As we are about to get up and walk over to the 10 a.m. staff meeting, our conversation shifts to coaches who have kept their job and kept their programs successful.

“It comes down to how committed you want to be, and that applies in a lot of different areas,” Dixon said. “I think a big part of Kansas’ success is their home-court advantage, we have to replicate something like that here. Obviously, we’re sold-out, but we have to create that atmosphere on a consistent basis. Every game we need to fill every seat, but you’re talking about 100 years. You talk about commitment; they hired the guy that invented the game. Obviously, they’ve had some challenges, but have gotten through them. That’s commitment.”

Commitment comes down to more than just dollars and cents, he said.

A former Horned Frog basketball player himself, his mission statement is simple: give the school the best basketball program possible while exhausting all of the resources at his disposal.

“At certain schools, they’ve been successful no matter who the coach has been or who has been there, and it’s just a certain thing,” Dixon said. “Other places it takes every bit of effort to get everything out of the resources available to us given our resources and university. It’s not just based on money: there are certain things you can’t buy. You have to make decisions every day on how you’re going to do things as a coach and administration and student-athlete.”

The commitment conversation continued with the rest of his staff during their daily morning meeting as talk shifted to making TCU a destination for transfer players with player movement in college basketball becoming more common than ever. At one point, he turned to me to ask if I knew of any one-year programs that TCU offered. Point guard Alex Robinson’s one-year master’s program in supply chain management comes up, but Dixon and his staff didn’t know how likely it was to get players into the Neeley School of Business.

He then referenced how other schools like Purdue are able to recruit transfers like Dartmouth guard Evan Boudreaux by utilizing graduate programs like their weekend Master’s of Science in Leadership and Innovation program, which is designed for people who work full-time jobs to be able to get a master’s degree. The program consists of four semesters and meets for “three on-campus weekends” during each semester.

“It’s going to come down to all these schools that will be creating one-year master’s programs,” Dixon said, turning to me and saying dryly, “Those that are ‘committed’ as we talked about earlier. They’ll come up with one-year programs to get guys in, those that are committed.”

Dixon and the staff move on to discussing opportunities in the DFW area to watch recruits the staff was interested in. To close out the meeting, Dixon begins talking about points of emphasis for that afternoon’s practice: guards coming to a jump-stop in the paint to prevent turnovers, something the staff still stresses at this point in the season, guards making a difference on the boards.

Back in his office going over some film before heading off to lunch, I asked Dixon how different it is coaching today versus 10 years ago, and he immediately cites social media, which leads us to talk about the photo of himself at a TCU equestrian meet that circulates Twitter among fans.

“I was kind of disappointed they wouldn’t let me do anything at the meet: they just told me to get on the horse. I thought I would be able to ride around, but they just wanted to take pictures,” Dixon said. “I didn’t grow up around horses, I was in Hollywood and the Bronx.”

Had he not been a basketball player, perhaps baseball might have been in the cards with the constant exposure he received when in New York.

“I would play some pick-up hoops, but Little League baseball was the go-to,” Dixon said. “I would try to play in the Little League in the area, but they wouldn’t let me play because I had to be a resident of the area, even though I was there in summer as much as anyone else who lived there year-round. If I had been able to play, who knows maybe I’m a baseball coach,” he said with a chuckle.

Lunch with a dash of commitment

At about 11 a.m., we join the rest of his staff in the Moncrief Club in Amon G. Carter Stadium to eat a brunch spread complete with an omelet bar, muffins, toast, cereal, soup and salad.

Dixon discusses different programs and players around the country and some of his former Pittsburgh players who are professional players overseas.

However, he ate quickly and headed over to The Cheesecake Factory for a birthday lunch for a booster and Athletic Director Jeremiah Donati, the type of outing he said he tries to limit or avoid completely during the season. His reasoning for darting out before the team’s scheduled 1:45 p.m. practice – “commitment,” he said with a wink.

While he’s out, assistants Scott Cross, Ryan Miller and Corey Barker all talked about their coaching career paths and how Dixon’s program at TCU allows them to contribute a lot of their own ideas.

They said Dixon isn’t above going with the best idea, no matter who suggested it. This is put in action at about 1:15 p.m., when Dixon returns to his office and Barker comes in to diagram the variations of a play called “Dribble” that Indiana State liked to run, wanting to see how they were going to attack it. Dixon locked into every word Barker said and furiously took notes as Barker diagrammed the play on a whiteboard on the wall.

Before practice began, Robinson danced around the arc, shooting three-pointers while guard Desmond Bane did the same on another basket. Forward JD Miller was at one of the side goals practicing a variety of shots as the rest of the team trickled onto the practice court. Dixon’s whistle pierced the air promptly at 1:45 p.m. and the team ran to the stations to begin drill work in their assigned groups. He walked the team through each drill before it began, each one beginning with a strong whistle.
During drills, he paced around the entire practice court, intently analyzing each group as the assistant coaches led the players through each drill, interjecting with words of encouragement in a calm and collected manner when he felt something needed to be corrected. Even water breaks happened at their prescribed time on the practice plan.

Halfway through practice, Jaylen Fisher sat out as he had his right calf worked on, an injury that dissipated before the team’s 20-point win over Indiana State the following Sunday, but a sign of what would come as the junior is now out for the season and is in the NCAA transfer portal after his knee swelled back up following the team’s Diamond Head Classic victory in Hawaii.

After practice ended at 3:45 p.m., Dixon lamented how injuries have been a constant during his time at TCU, more noticeable than what he had observed during his 13 years at Pittsburgh. Three players who he thought were going to factor into the rotation—Fisher, Lat Mayen, who told Dixon he was “100 percent” on Jan. 14, and Angus McWilliam—sit out for significant stretches of time.

“I’ve never had three guys consistently out for a stretch for as long as they did, about six months, it’s unheard of,” he said.

Dixon also spoke about the importance of keeping guards like Robinson healthy.

“There’s a timing element to them and sometimes it’s the right injury since you can lose big guys and be okay,” Dixon said. “When you lose guards, that’s where you run into problems. You can always play smaller and be all right, but when you have to play bigger, moving small forwards to guards and shooting guards to point guards and centers to power forwards, that’s when it can be difficult.”

The day concluded with Dixon leaving to meet his son Jack for a work-out, and he turned to me and said, “Thanks for stopping by, that’s what we’ve got here, hope you enjoyed it. See you Sunday.”

Listen: The Podell and Pickell Show with Christen Lockett Re-Air