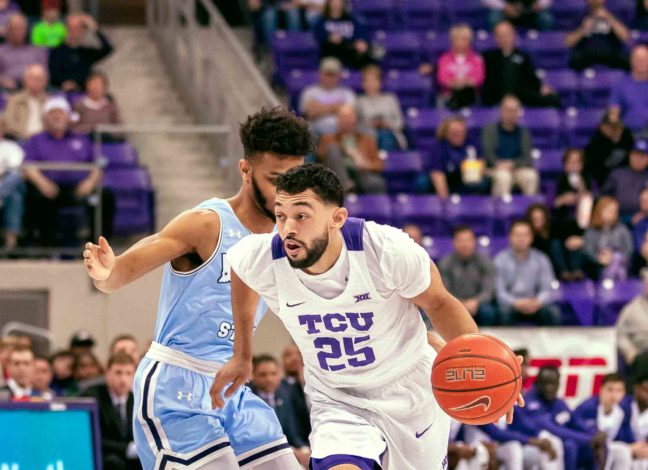 TCU Men’s Basketball overcame a sluggish start against the Indiana State Sycamores in their first game in nine days en route to a 90-70 victory.

“I thought it was good; that’s a really long break so it can be dangerous, but we came out and responded well,” said senior point guard Alex Robinson.

A crucial element to the Horned Frogs’ victory was their defense. They limited the Sycamores to 19 percent shooting from the three-point line, 29 percentage points lower than their NCAA-best 48.2 percent mark that they brought into Sunday’s game.

“We wanted to guard the perimeter,” said TCU head coach Jamie Dixon. “We wanted to take away the three, and obviously the team led the country in 3-point shooting: We held them to 18 percent.”

With TCU up 14, 27-13, Indiana State made a push and scored seven-straight points that trimmed the Horned Frog lead to single digits, 27-20.

TCU had an answer to the run as Bane drilled his first three-pointer of the afternoon and center Yuat Alok hit on a hook shot to return the Horned Frogs’ double-digit advantage, 32-20, with just under four minutes left in the first half.

Following a Robinson lay-in with nine seconds left in the half, the Horned Frogs took a 12-point lead into the locker room, 38-26.

Ball security was a critical component of TCU’s ability maintain their lead in the first 20 minutes as they committed just six turnovers to Indiana State’s 12. The Horned Frogs would finish the contest with 10 turnovers and the Sycamores committed 20.

The second half opened on a high note for the Horned Frogs as Fisher hit back-to-back three-pointers and increased the TCU lead to 18, 45-27.

Fisher is shooting 22-of-45, 48 percent, from distance in his last five games, providing TCU with much-needed spacing for their offense.

“We got the all-time assist leader [Robinson] and another good shooter [Bane], so it just feels easy right now because the floor is so spaced,” said Fisher. “You’ve just got to be ready when it’s your time.”

Robinson provided the bulk of the scoring for the Horned Frogs, pouring in a game-high 20 points to go along with five assists.

Bane also chipped in with an efficient 17 points on 7-9 shooting. The Richmond, Indiana native was never offered a scholarship from Indiana State, something he kept in the back of his mind.

“That’s kind of been something that has stuck with me throughout my whole career just schools that are in Indiana that didn’t offer me or take me and I really want to make a point any chance I get to play one,” he said.

The Horned Frogs will take the win and enter the Diamond Head Classic on a high note.

TCU’s first game of the tournament against the University of Charlotte tips off at 11:30 p.m on Dec. 22 from Honolulu, Hawaii.Read More