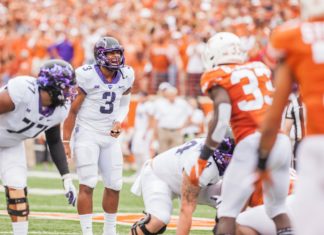 Saturday didn’t go the way TCU head coach Gary Patterson would’ve liked on either side of the ball as the 17th-ranked Horned Frogs lost for the second week in a row, this time a 31-16 road defeat against Texas.

“This is no different than Andy Dalton in 2007, we were averaging almost two or three picks a game through the first eight or nine ballgames,” Patterson said. “I think we were 4-4 after our first eight. We lost our first one after that stretch to BYU and then we won the rest of them out.”

Even though Robinson committed a career-high three turnovers, two interceptions into the hands of Texas safeties Brandon Jones and Caden Sterns and a fumble following a 16-yard gain on the ground, Patterson said the loss in Austin isn’t all on his sophomore quarterback who accounted for the Horned Frogs’ only touchdown, a goal-line fade pass to wide receiver Jalen Reagor that concluded the first half.

“You can’t turn the ball over and beat people, you’ve got to make sure that you take care of business, and some of that is on us, it’s not just on Shawn,” Patterson said.

Through Robinson’s first four contests against Southern, SMU, No. 4 Ohio State, and Texas, he’s completed 74 of his 122 passes for 841 yards while throwing five touchdowns and three interceptions.

Through Dalton’s first four contests against Baylor, No. 7 Texas, Air Force, and SMU, he completed 75 of his 126 passes for 763 yards while throwing three touchdowns and three interceptions.

When Dalton was finding his way in 2007 and with Robinson still looking to capture week-to-week consistency this season, the game plan the Horned Frogs used to close out Dalton’s first year with four consecutive victories is one the 2018 iteration could easily replicate.

“I think you have to give Texas credit, they’re doing what they need to do on offense to win ballgames, and they’re letting their defense win the ballgame for them,” Patterson said. “It’s a good game plan, and we know that game plan very well, it’s how we’ve been here 21 years.”

The Horned Frogs actually out-gained the Longhorns by five yards, 372 to 367. The TCU defense sacked Ehlinger three times, while not surrendering any sacks.

“I’m not overly upset with the defense, but the bottom line is you’ve got to find a way to get a takeaway,” Patterson said.

Once the defense finds their way to helping the Horned Frogs win the turnover battle, which is a realistic expectation with more than a few pieces from 2017’s top-ranked Big 12 defense still in uniform, in addition to Robinson learning through his lumps, 2018 still has a chance to go out with a bang like 2007. Read More