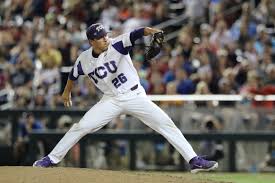 TCU pitcher Sean Wymer made the final roster for the USA Collegiate National Team that is set to take on Japan in a five-game series starting Wednesday in Hartford, Connecticut.
Wymer joined the 24-man team after a season in which he tossed 55.2 innings to the tune of a 2.10 ERA with 66 strikeouts in 30 relief appearances for the Horned Frogs. Wymer earned Second-Team All-Big 12 honors in a 2017 season that saw him play a pivotal role out of the bullpen in TCU’s fourth straight College World Series appearance.

Wymer has seen action in two games for Team USA. Wymer started a June 29 game and pitched four scoreless innings to pick up a win in a 3-1 victory over Chinese Taipei. He also pitched four innings in a relief appearance in a 7-2 loss July against Cuba, allowing four runs on seven hits. Read More