Frogs drop another close one against Oklahoma for seventh straight loss, 73-68 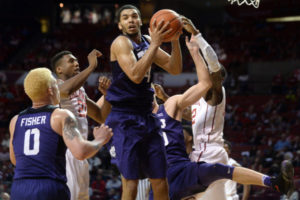 The Horned Frogs led the Oklahoma Sooners by as much as six points with ten minutes left to play in Norman, Oklahoma Saturday, but the couldn't hold on, losing their seventh consecutive game, 73-68.

After TCU forward Kenrich Williams knocked down a three-pointer with 1:05 left in the game to tie OU at 66, the Sooners found their way to the free-throw line and hit seven of their last eight free-throws to finish the game. TCU scored only two more points after Williams' game-tying shot on a layup by Vladimir Brodziansky.

Free throws were the only statistic where Oklahoma separated themselves from TCU, with the rest of the game even across the board.

"We’re a team that has lost of lot of close games here down the stretch, and we’re battling, we’re up, and we just didn’t get it done," TCU head coach Jamie Dixon said. "Give OU credit for making their free throws because we didn’t make ours and that puts you in a difficult situation."

The Sooners shot 77 percent (17-22) from the charity stripe, whereas TCU got to the free throw line just nine times and making four - a 44 percent clip.

"I thought our defense was better because we held them to 44 percent from the field. Simply put we have to get it done at the free throw line," Dixon said. "It seems that’s been a common occurrence for us, and we’ll have to improve in that area."