TCU hangs around in first half, gets ‘put away’ by Kansas in second half, 87-68 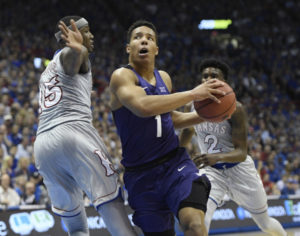 TCU trailed by just a point at the half in Lawrence Wednesday night, but they couldn’t keep up with No.3 Kansas in the second half, 87-68.
The rebounding differential in the first half and second half told the story of Wednesday’s contest.

“We were plus-eight in the first half and got out-rebounded in the second half by fifteen, pretty simple,” TCU head coach Jamie Dixon said. “They got every long rebound, loose ball, deflection in the second half of the game, which is where it got away from us.”

The Horned Frogs shot a subpar 39% from the floor Wednesday.

TCU is now on a four-game losing streak, their second such streak of the season.

“We’re a bubble team that has lost four in a row, and we’ve played ourselves onto the bubble,” Dixon said. “We lost at Baylor, at Kansas, and Iowa State, so we’re not ready to beat those teams on the road the way we play for periods of time.”

However, the Horned Frogs are already looking ahead to Saturday when they host No. 12 West Virginia, calling it their “biggest game.”

“Our biggest game of the year for us on is on Saturday,” Dixon said.

His players have the same mindset. Read More