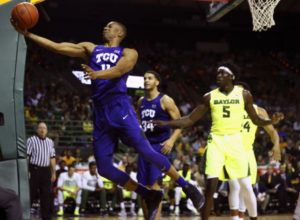 TCU’s three-game Big 12 winning streak ended quickly and quietly Saturday in Waco to No.6 Baylor, 70-52. The Horned Frogs never held a lead and fell behind by as much as 21 in the second half.
The loss dropped the Horned Frogs’ record to 17-8 overall and 6-6 in the Big 12. TCU is still looking for its first win over an AP Top 25 team since a 70-55 win over No. 21 Oklahoma State on Feb. 14, 2015. The Frogs have lost its last 20 games against ranked opponents.

A key factor in TCU’s defeat was losing the battle on the boards, as they were out-rebounded by ten, 36-26.

“We really got outworked tonight, defensively, on the boards, rebounding,” TCU forward Kenrich Williams said. “It’s just surprising and a bit of an embarrassment.”

Williams’ head coach concurred, as the Horned Frogs surrendered 42 points to the Bears, double the amount TCU scored at the rim, 26.

“We got out-rebounded by ten in a low possession game, we didn’t get them to turn the ball over, and they made shots,” TCU head coach Jamie Dixon said. “Our defense and rebounding let us down.”

Three players did most of the damage for Baylor: forward Johnathan Motley, point guard Manu Lecomte, and guard King McClure. The trio scored 40 of the Bears’ first 46 points. Motley finished with a game-high 25 on a near-perfect 12-15 shooting, Lecomte scored 17, and McClure added 13. Lecomte and McClure each hit three three-pointers.

Frustration boiled over for Williams with 12:33 left in the game. After a foul by Baylor forward Jo Lual-Acuil Jr. halted a TCU fast break that would’ve resulted in an easy dunk, Williams slammed down the basketball in frustration, resulting in the game’s only technical foul.

However, TCU freshman point guard Jaylen Fisher provided the Horned Frogs with their lone bright spot in what was the Horned Frogs’ biggest loss of the season, scoring a career-high 18 points. Read More